The proverbial fat lady is about to sing — again — as Grant Gustin readies to reshoot a climactic scene from The Flash‘s musical crossover with Supergirl (titled “Duet” and airing Tuesday, March 21 at 8/7).

Having spent much of the day filming an episode that airs later in Season 3, Gustin has kicked off Barry’s trademark sneaks and suited back up in a tux-and-tails. He now is laying supine on the ground, exposed to the elements of a typically cold, very late Vancouver-adjacent night, annnnd… that is about all we can reveal about the intense moment. Because, you know, superspoilers!

But worry not, there is much TVLine can share about the CW hit’s imminent mash-up, which before it wows viewers first had to pass muster with its most discerning critics: a musically gifted cast. 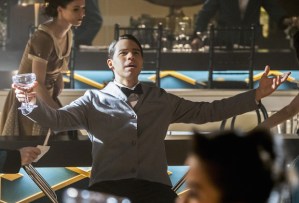 TOGETHER
“Honestly, I can be a bit of a pedant when it comes to musical theater because it’s kind of my lifeblood. I went to school for it,” The Flash‘s Carlos Valdes shared during our recent visit to the set. Specifically, he participated in the University of Michigan’s theater programs alongside Glee grad Darren Criss — who just so happens to be playing the villain Music Meister in this #DCTV event.

But when all was said and done, Cisco’s portrayer added, “The concept of the episode is very quirky, and very fun. I was pleasantly surprised. We executed it well!”

Valdes’ on-camera reunion with an old classmate is far from the only coincidence brought on by this special occasion. Benj Pasek and Justin Paul, who cowrote La La Land‘s Academy Award-winning “City of Stars” and contributed a ballad to this episode, also attended the University of 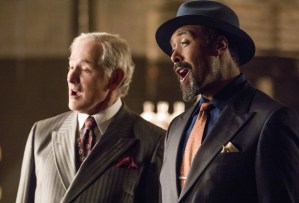 Michigan… and have known series lead Gustin ever since they met his 19-year-old self during a visit to Elon University, where they were conducting a workshop. The Flash‘s Jesse L. Martin meanwhile has been friends with returning guest star Victor Garber (Legends of Tomorrow) “for well over 20 years,” yet this marked the first time they have sung together.

“I got to work with my old pal and sing some beautiful songs,” Martin said, smiling. “That was one of my favorite moments.”

Add in the Glee of it all — like Criss, Gustin and Supergirl star Melissa Benoist previously starred on Fox’s musical dramedy — and you almost wonder how this episode didn’t come together sooner. But what brings about this out-of-the-ordinary, sure-to-be-extraordinary outing?

A ‘SADISTIC CUPID’ HITS HIS TARGETS
For never was a story of more woe. Than this of Iris West, and her… Mon-El? At the close of Supergirl‘s Monday episode, the Music Meister materializes in National City to unleash a “whammy” on Kara (played by Benoist) 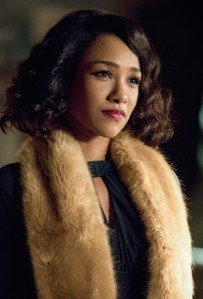 . When Mon-El and Hank Henshaw (Supergirl‘s Chris Wood and David Harewood) lug the comatose Girl of Steel to Central City for help, Criss’ baddie puts the same hurt on Barry, landing both of the heroes in a dream-like state populated by friend-ly strangers.

Per Candice Patton, “Barry and Kara envision this world where Iris’ character and Mon-El’s character” — named Millie and Tommy — “are very, very deeply in love with each other. And that obviously throws them off, because those are their love interests.” Millie, the “fast-talking, brash daughter of a mobster,” and Tommy are “fighting for their love, because their families don’t want them to be together,” the actress added.

All of which leads to an important lesson to be taught to Barry and Kara, as they navigate this musically delicious world. “Music Meister is almost a sadistic, wannabe Cupid,” Supergirl‘s Jeremy Jordan observed. “His way of telling a love story is by putting you in a trance 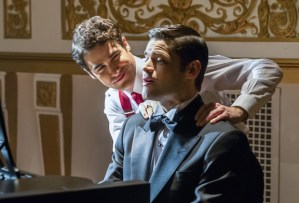 and making you fight your way out.”

Playing one of Millie’s two dads (alongside Garber), Martin noted, “That’s one of the cool things about [The Flash] — just when you think you’ve settled into the character that you’d originally been given, all of a sudden they find a way to give you something else to do.” Jordan similarly has (as he put it) a “Wizard of Oz-like” counterpart, playing the musical director for a 1940s-era club. “He’s very bossy,” he reported with a laugh, citing the un-Winn-like qualities. “I also gave him a superfun Jimmy Stewart-meets-turn-of-the-century New Yorker accent.”

SONGS THAT HIT ‘HOME’
Amid this tale of mixed-and-matched loves and friendly-but-strange faces, what exactly can viewers expect on the musical front?

As seen above, Valdes teams with Criss, Jordan (on piano) and Legends‘ John Barrowman to “Put a Little Love in Your Heart,” which the Flash fave describes with a laugh as “gratuitous, literally three high tenors and John Barrowman screaming for their lives!” Martin and Garber’s aforementioned duet is titled “More I Cannot Wish You,” while Gustin and Benoist celebrate being “Super Friends” in a tune penned for the crossover by Crazy Ex-Girlfriend creator/star Rachel Bloom.

Though Gustin and Benoist, both hailing from Glee, are no strangers to TV dance numbers, there were still a few nerves. “Grant and Melissa were both worried about it, and yet having such a great time,” Martin shared of the peek he sneaked of the twosome’s impeccably attired tap routine (see photo below). “They were literally going for it, and I was super glad to see that. It was absolutely fantastic.”

The most emotional piece of the five-song playlist, though, stands to be “Runnin’ Home to You,” the original song from La La Land‘s Pasek and Paul. “Beautiful” is the word both Patton and Valdes used to describe Barry’s ballad, while Gustin himself singled out his friends’ tune as his favorite moment of the hour. 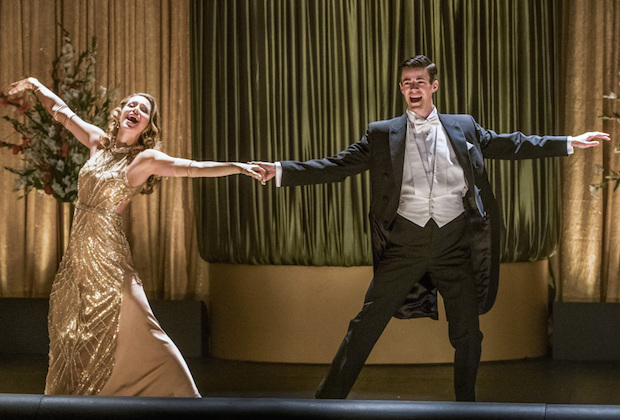 Of all the incredible talent assembled on- and off-screen for “Duet,” Gustin gives the biggest props to a Flash crew that kept everyone energized throughout such an involved shoot and so late into the season, when even the biggest pros start Run, Barry, Run!ning on fumes.

“We did one of the most challenging episodes we’ve ever done at one of the harder parts of the season, but the crew was just thrilled because they had never seen, I think, the types of things we did on set,” Gustin went on. “A lot of these people have been in the industry for decades, and they’ve never worked on a musical of any kind. So it was cool, especially for actors they know to be, oh, singing and dancing! They were having the time of their life, and that kept me going, like being on stage.”

Will you be in the audience for Barry and Kara’s “Duet” this Tuesday?