On The CW’s The Flash (airing Tuesdays at 8/7c), Iris’ engagement ended in a jiffy when it came to light that Barry popped the question in part to stop the future in which his longtime love gets slain by Savitar.

Having previously shared Grant Gustin’s take on the sad twist, TVLine also chatted up Candice Patton during our visit to the set, where she assayed Iris’ emotions, shared the West family’s torment over Wally’s situation and teased fun times ahead in the March 20 musical episode featuring Supergirl superfriends.

TVLINE | That was kind of a bush league move from Wally there, returning from “the future” and blabbing about Barry’s motivation for proposing.
I know. I guess it depends on who you ask. He’s trying to stick up for his sister, obviously, but he did throw Barry completely under the bus. He then got in the bus, drove it, ran back over Barry a bit…. Yeah.

TVLINE | What was important to you about that heart-to-heart between Iris and Barry? Where she said he should have proposed purely out of love…
“…and not because you’re afraid for me.” Say what you will, I think everybody is kind of rooting for “WestAllen,” but I think Iris has a legitimate concern and fear. No woman or man wants to be proposed to out of fear. I mean, to save your life is a huge thing, but you want your marriage to be based in love. So Iris is going to need some time to think about it, if this is the right thing to do.

TVLINE | I thought it was a great scene in that it walked these fine lines, where you wanted to make sure she did feel appreciated, that she wasn’t dismissing the gesture wholesale. She just wanted it properly contextualized.
Exactly. Iris isn’t saying that she doesn’t love Barry. She very much does. But she wants the engagement to be everything a woman dreams of — that it’s real and romantic and based in love.

TVLINE | Are there actual noodles…?
[Sadly] No. I’ve never smelt Grandma Esther’s noodles, so I can’t tell you if they’re actually good or not.

TVLINE | How do you think the circumstances would need to be different for Barry to even think about proposing again?
I think he’s got to be genuine, first of all. Not that he isn’t genuine, but he needs to make Iris assured that obviously he wants to save her but that he wants to be with her because he loves her, and she’s the only person he wants to be with.

TVLINE | How are the Wests 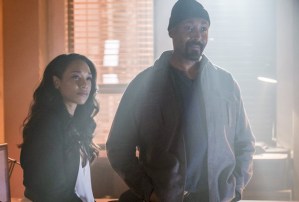 coping after Wally got sucked into the Speed Force?
They’re devastated. The thought of losing a family member, especially for the Wests and for Barry, is horrific. We’ve lost so many people. We lost [Iris and Wally’s mother] Francine just last season, so the thought of Wally being trapped somewhere and us not being able to get to him is really devastating. We’re going to see them grapple with that in this next episode.

TVLINE | My readers are repeatedly asking: Are we going to see Iris doing anything to investigative the Savitar thing, to kind of help her own cause?
No. [Laughs] I know, I know fans are constantly wanting to see Iris do more investigative work and to use her reporter skills to further the narrative that’s happening this season with Savitar. Maybe next season we’ll see more of that.

TVLINE | The producers told me that Iris plays a huge role in the musical crossover with Supergirl (airing Tuesday, March 21).
Yeah! I saw that article, and I didn’t really think of it that way, but yeah, she’s a big part of it because this is her 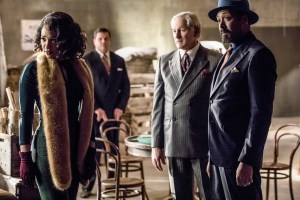 first crossover ever. Although I don’t thinks she’s technically crossing over….

TVLINE | She’s being “crossed over” [by some Supergirl cast].
She’s being “crossed over,” yeah. We get to see Iris as a completely different character — new name, new everything. Barry is whammied by the Music Meister and both him and Kara are in this dream-like state where they envision a world where… Iris is this fast-talking, brash daughter of a mobster. It’s a wig that we put on, and I was very much inspired by [Dick Tracy‘s] Breathless Mahoney. It’s just fun for us to do something different, because Iris usually has that “girl next door” thing going on. Even the sets we’re in are so glamorous and kind of 1940s-style. It’s really fun.