Just when Grey’s Anatomy had us wondering whether it was ever going to pick up the Meredith/Nathan story again, “Back Where You Belong” reminded us that Grey has a keen understanding of Riggs’ mindset. And in Thursday’s episode, the non-couple appeared poised to make some actual progress in their non-relationship. The one thing standing in their way? Not Maggie this time — well, at least not only Maggie — but Alex. Did the would-be duo nonetheless manage to go anywhere besides in circles? Read on…

‘EVERYTHING’S SO MUCH HARDER THAN IT NEEDS TO BE’ | As “Civil War” began, April was avoiding Jackson; Richard, Catherine; and Amelia, Owen (still). But Mrs. Hunt wouldn’t be able to dodge her husband for much longer — Maggie needed her to clip a brain aneurysm. At work, Mer cheerfully made it clear that she was holding a grudge against April for replacing her, and Nathan teased Grey that, after being suspended for sticking up for Richard, she sure had folded fast. Naturally, she denied that that was what she had done. Observing the exchange, Alex — aka Dr. Cut-to-the-Chase — told Mer that if she wanted to be with Riggs, she should just be with him already, Maggie would get over it. Of course, Grey insisted that she didn’t want to be with Nathan.

Upon running into Andrew in an elevator, Alex asked, since the two of them would be working together that day in peds, “Are we cool?” Against all odds, they were — an especially good thing since baby patient Gus turned out to have a heart murmur. Meanwhile, Webber, aware that Minnick’s program was gaining in popularity, thanked Arizona for remaining in his corner. This was, as you’d expect, terribly awkward for Robbins, since she and Eliza were getting involved. When April complained to Catherine that she felt demoted, the older doctor gave her some tough-love cheerleading, then they got involved in a trauma case precipitated by a turkey-frier incident. 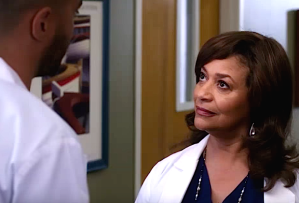 ‘I’M GOING OVER YOUR HEAD’ | Catching his mother alone, Jackson reminded her that he was “the voice of the Avery Foundation” at Grey Sloan, thanks to the position she’d strong-armed him into taking. As such, “I’m gonna be making the decisions from now on,” he announced. Top of his to-do list: Right Catherine and Bailey’s wrong by going over Mom’s head, turning the Richard/Eliza situation around and showing Minnick the door. Off this tense talk, April, Jackson, Richard and Catherine all wound up treating the turkey-frier patient. Sorry, did I say “treating”? I meant “arguing over,” leaving Ben to be the voice of reason, thanks to a strategy learned from Eliza.

While operating on the turkey-frier guy, it was revealed that not only was Catherine planning to show April around an Avery trauma center in Chicago, she was also taking her to Hamilton while they were there. Jackson took advantage of the opportunity to light into his mom about Eliza, spitting that “Dr. Minnick makes robots” — as opposed to his teacher, Mark — and calling her out for her and Bailey’s handling of the transfer of power. Naturally, Catherine shut him right up. Later, Arizona had to shoot down Richard’s offer to get dinner — secretly, because she had a date planned with his archenemy.

‘I’M THE PEDS GUY… I KNOW THINGS’ | Once Nathan was called in on Gus’ case, he and Alex clashed almost immediately, with the former advocating waiting for a heart transplant. As soon as Karev was out of earshot, Riggs, anticipating the parents going for his option, had Andrew put the baby on the transplant list — and keep it from Alex. Even before Karev found out, he was so pissed that he gave Mer an earful about the “snake.” DeLuca, for his part, didn’t know what to do. When he confided in Jo, without giving away the names of the doctors involved, she said, “You’ll make the right choice. You always do.” 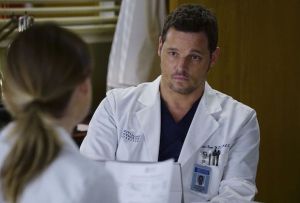 Off Alex’s outburst, Mer pulled Nathan aside and told him that if he wanted to get anywhere with her… Wait just one second. Get anywhere with her?!? This was, predictably, music to his ears, as it indicated to him “that there’s somewhere to get with” her. But he didn’t take well to Grey’s attempt at mediating, or telling him to play nicely with others, so he wound up stomping off. In the middle of their conversation? “Damn right,” he said. “I’m a jerk.” Later, a perfect-match infant heart became available, which ticked off Alex so much that he lodged a complaint with Maggie, who told him and Riggs to do their damn jobs. Karev wanted to be mad at Andrew, too, but DeLuca explained his reason for putting Gus on the donor list thusly: It was about a kid.

‘FLOSS?’ | After performing Maggie’s surgery, Amelia tried hard to sneak out of the hospital without bumping into Owen. She had made it, too, but when an ambulance pulled up at just the wrong time, she revealed herself to Hunt to help the patient. “I didn’t realize you were back,” he said when things had calmed down. Since she insisted she’d only emerged from hiding for dental floss, he tried to have her replaced as the neuro on the case. Then, he learned that she’d been there for quite a while and had even performed surgery. (Ouch.) “Did you plan on seeing me at all today?” he asked as they scrubbed in. Er, no.

In spite of all that, Amelia refused to be dumped from the case. “There are no lost causes,” she told Owen, perhaps speaking as much about their marriage as the patient. Post-surgery, Amelia admitted that yes, she did want to be hitched to Owen. But she still wasn’t ready for them to have the fight that she knew was coming. And there did have to be a fight — they wanted completely different things. And if they fight, “somebody has to win,” she noted. “Or,” he countered sadly, “no one wins.”

‘NOBODY TELLS ME WHAT TO THINK’ | As the episode neared its conclusion, Arizona and Eliza decided they needed a nap (no, not that kind) before their date. Richard let Ben take the lead on the turkey-frier guy case the way Minnick would have, prompting Jackson to encourage him not to give up on ousting Eliza. Later, Jackson continued to press the issue with Catherine, and suggested that his mother was replacing him with April as the Avery she’d always wanted him to be. Finally, Nathan told Mer, “No banter, no more quips,” he wanted to be involved with her. Did she want to be involved with him? On second thought, he decided, she shouldn’t respond till she knew her answer. After Richard walked in on Arizona and Eliza kissing, he declined Catherine’s request to sleep in his own bed, not the on-call room. And April learned that Jackson was headed to an Avery hospital in Montana for a consult.

So, what did you think of “Civil War”? Are you hoping Mer will decide to go for it with Nathan? Hit the comments.