Although Thursday’s Grey’s Anatomy found Alex once again scrubbing in at Grey Sloan, the hospital to which he returned didn’t feel quite like the one he’d left, what with Meredith’s suspension, April’s ascension and pretty much everyone’s tension. Did things get back to normal before the end of “Back Where You Belong”? Read on and find out.

‘THE BAND IS BACK TOGETHER’ | As the episode began, Amelia was back at the house with Alex, Maggie and Meredith. However, “I do not live here,” Owen’s estranged wife insisted. “I’m crashing.” For her part, Mer was going nuts from boredom. In fact, she was so bored, she’d looked up the hospital bylaws to find out that, indeed, in spite of the fact that she was an owner of Grey Sloan, Bailey could suspend her. Speaking of the hospital, Stephanie was there panicking at the prospect of being assigned by Eliza to team up with Alex and Jo to treat another kid, Chris, a teenager whose parents, to put it mildly, didn’t get along. Nearby, a seemingly homeless woman — or at least an unkempt and disoriented one — wandered into the E.R. and collapsed before Nathan and Andrew could ring Security.

Shortly thereafter, having more than merely flirted, bonded, with Minnick in “It Only Gets Much Worse,” Arizona struggled to give the impression at work that it was all business between them. “She’s the worst,” Robbins told Jackson, laying it on maybe a wee bit too thick. In front of April, Jackson wondered how Arizona could even be polite to Dr. Unpopularity after she’d screwed over Richard. “All Minnick did,” Kepner countered, “was take a job she was offered.” No, her ex replied, Minnick stole the job — a concept in which April was well-versed, he added.

‘THIS IS NOT A THING THAT HAPPENS’ | In an examination room, Maggie discovered with Nathan and Andrew that their Jane Doe had an ancient pacemaker and replaced it to fix her up. Plus, the old ticker revealed her identity. At the same time, Jo, upon learning that Chris’ mother had run away with him because his father was abusive, asked Owen to intervene and make the guy leave. (Didn’t go well.) Naturally, Alex was concerned about how this revelation was affecting Wilson. Things only got worse for Team Chris in the O.R. Though the youngster’s mom had a kidney removed to give to him, her other kidney died before Jo and Stephanie could transplant the first one into her son. So, yeah, not the mother/son duo’s best day ever.

While Alex, Richard and April (in charge in Bailey’s absence — more on that momentarily) debated whether Chris or his mom should get the kidney, Eliza asked Stephanie who she thought should get the organ. The mom would want her son to have it, Edwards reckoned. Then again, if he survived and Mom didn’t, he’d end up back with Dad, who probably beat him as well. While Jo tried to find a new kidney, Dad overheard and forcefully demanded to know what was going on. Miraculously, he actually did some good, offering up his kidney. Before he was put under anesthesia, Jo, perhaps rightly, accused him of using this as “an excuse to worm your way back into their lives” and told him, if he really wanted to do some good, he would “never tell them about this. Do it anonymously… and they never have to see you again.” 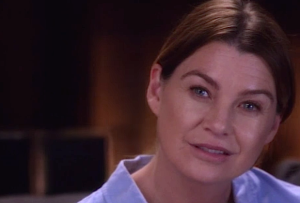 ‘LEAD WITH ME, BUT FOLLOW WHEN I LEAD’ | Determined to set things right with Mer, Bailey showed up on her doorstep ready to hash out their differences “like smart women.” Unfortunately, Mer didn’t need to be sold on how “fun” Minnick’s methods were. She simply felt — and strongly — that the chief made a bad call and should have had Richard’s back. As such, though Miranda offered to put Grey back to work, “I do not want to be reinstated unless Richard is” also reinstated as residency administrator, Mer said. “There’s a difference,” Bailey noted, “between loyalty and stubbornness.” And this might well be it, especially considering that Webber was actually spending the day working fairly well with Eliza. (Well, fairly well for him — he still considered her a menace.)

When Bailey returned to Grey Sloan, she informed Richard that she wasn’t costing Mer and the hospital time and money, he was — because she chose him. So he paid Grey a visit and found out that, every time she thought of returning, she heard her mother’s voice saying, “Meredith, it’s Richard” — even though, as he pointed out, Ellis never would have put him before her career. Still, off that talk, Mer put in a call to Bailey. 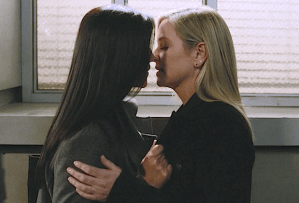 ‘NOBODY CAN FEEL THE SNAKES… HI, MOM’ | By and by, the mother of Jane Doe — actual name: Claire Nolan — arrived at the hospital and was stunned to learn that her daughter had been found. And really stunned to learn that she’d been found alive! “We had a funeral,” Mom said, shocked, after learning that Claire hadn’t been abducted, she had been — and still was — schizophrenic. “How is this not a happy ending?” Maggie asked Nathan when Claire’s parents didn’t jump for joy at her resurrection. They’d moved on, he replied in such a way that it immediately reminded us of his past with Megan. As the hour drew to a close, medication helped soothe Claire’s mind enough that she recognized her folks.

That evening, April and Jackson snapped at each other at home so sharply that you’d swear they were still married. Arizona told Eliza that she was tired of pretending that she didn’t like her. “I need you to stop” talking now, Minnick said, “so I can kiss you.” And so it began. (Or continued, really. That kiss was inevitable.) When Chris’ mom asked where the kidney that had saved her son had come from, she couldn’t believe that an anonymous someone had been so good as to donate their organ. Noting Nathan’s strangeness over the resolution of Claire’s case, Maggie asked if he wanted to talk, but he was great, he insisted. They got a happy ending after all. Checking on Jo after her dealings with Chris’ abusive dad, Owen gave her a hug. Finally, Maggie joined Amelia in Mer’s bed and mentioned how troubled Nathan had been. There had been one day when Mer hadn’t known where her late husband was, she said, and she imagined it was like that for Riggs every day. “You get him,” Pierce observed. And, based on the scenes from next week, it looked like she might actually get him after all.

So, what did you think of “Back Where You Belong”? Were you glad Arizona and Eliza kissed? Looking forward to picking up the Nathan/Mer story? Hit the comments.