We’re more than halfway through this first season of Legion now, and we’re starting to understand how David’s mutant mind works (and doesn’t work). But this week’s episode threw a few new curveballs at us… including a truly WTF moment at the end that threatened to take us all the way back to square one.

David and Syd bring a wounded Kerry back to Summerland so Cary can patch up his bodymate. And David has a newfound confidence — you could even call it arrogance — after rescuing Syd. He calls himself “the Magic Man” and tells Syd with a devilish smile, “I found a way for us to be together.” He whisks her away to an alternate reality: a pristine, all-white room that he’s created for them with his mind. She’s hesitant at first, but is delighted to see that in the White Room, they can actually touch each other… without gloves! Judging from the bugs crawling all over a dish of strawberries, though, the White Room still has a few kinks in it.

A puffed-up David informs Melanie that he and Syd will be leaving in the morning to rescue his sister Amy from the Division 3 baddies. Melanie warns him against doing that without a solid plan in place, but he shrugs her off: “I’ll be fine.” Back in the White Room, David and Syd sleep together for the first time, and Syd tells him, “Promise me: If we get lost, we get lost together.” But while she’s asleep, David retreats to the bathroom and chats with Lenny, who convinces him to fight Division 3 alone. When Syd wakes up, he’s already gone. 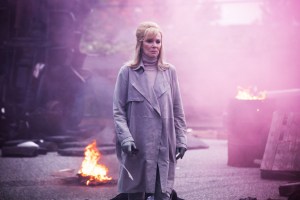 Syd runs and tells Melanie and Ptonomy, and they all (along with some unnamed Summerland redshirt) pile into a car to the tune of Radiohead’s sinister dirge “The Daily Mail” and head to the Division 3 base. There, they find carnage everywhere: mangled bodies of soldiers stuck inside the pavement, cars flipped over and on fire. They check out surveillance footage and see David joyfully waltzing through the halls, murdering soldiers at will by waving his arms like an orchestra conductor. They also see the Devil With the Yellow Eyes in ragged clothes, vaporizing soldiers left and right.

David and Amy are gone, and the Summerland gang finally gets to the room where Walter (aka The Eye) tortured Amy with leeches. There, the other old man who interrogated Amy lies near death, muttering: “We thought we were ready… so much power.” He tells them David took Amy, and warns them to be careful (“it wears a human face”) before finally dying. Syd is, understandably, freaked out by this point: Who is this guy she’s fallen in love with?

RELATED Legion Boss Makes Sense of the Trippy Series Premiere — Plus: Grade It!

Cary chimes in with a theory: He watched a recording of David’s MRI and saw flashes of the Devil With the Yellow Eyes, along with David as a child. He thinks David actually is schizophrenic, and the Devil is a “parasite” that burrowed its way into David’s brain years ago. It may have rewritten David’s memories — and may be rewriting theirs, too. Syd zaps back to the White Room to find David playing the banjo and singing “The Rainbow Connection” from The Muppet Movie, with his beagle King and the World’s Angriest Boy nearby. She zaps back to tell Melanie and the crew: “He went home.” (So he’s locked himself away inside his childhood memories?) 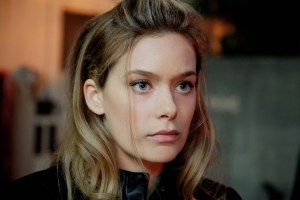 David, meanwhile, takes Amy back to their childhood home, and they’re suddenly joined by Lenny. (Or Benny. Or King. Or the World’s Angriest Boy. Lenny morphs into all of the above, really.) David insists to a terrified Amy, “You know something about me,” and wants to know what it is. Amy finally spits out the truth: David was adopted. Their parents wanted to tell David, but Amy thought it would make things worse. Well, glad we avoided that unpleasantness!

The Summerland gang arrives at David’s house — with Walter, who survived that Division 3 massacre, lurking in the woods. As they approach, they hear a shrill ringing noise, and suddenly, none of them can speak. Inside, the house is dark and spooky, with figments of David’s imagination like the World’s Angriest Boy running around. Cary joins them, holding a sort of collar he’s fashioned in the lab to separate David from the demon inside him. Oh, and Walter has shape-shifted to disguise himself as that Summerland redshirt.

RELATED Legion: Why FX’s New Marvel Drama Is Unlike Any Other Superhero Show

Syd finds Amy sitting on the floor in a room upstairs, and gets thrown against the wall by Lenny, who mounts a comatose David and tongue-kisses him. The rest of the gang comes into the room, including Redshirt, who pulls out a gun and fires at David. Syd pushes him out of the way and yells at him to take them back to the White Room. He does, but it’s messed up there: The Devil With the Yellow Eyes chases Syd across the room while David stands frozen, powerless to help her. Syd falls down on the bed, screaming, and the Devil looms over her when…

Suddenly, Syd is awake, as if out of a bad dream, and sitting in a circle in a Clockworks group therapy session. In the circle are Ptonomy, Kerry and Cary, Melanie, Walter (eating an apple) and David, with everyone in those drab Clockworks uniforms. And Lenny is their therapist, calmly prompting Syd: “You were talking about how the death of your father affected you. And I think that’s very brave.” Syd takes this all in and then turns to Lenny: “OK… let’s talk.”

Alright, let me try to wrap my feeble brain around what we just saw: Was that final scene in Clockworks actually happening? Was all of this just a daydream of Syd’s? Or are we stuck in another weird corner of David’s psyche? How much of what we saw this week, if anything, is real? I wish I could phrase this question more eloquently, but: WTFFFFF????

* Like Melanie, I’d like to see David bring her husband Oliver back from that “ice cube” he’s living in — just so we can enjoy more of Jemaine Clement dancing.

* Syd’s story about losing her virginity as a teen — she slept with one of her mother’s boyfriends by switching bodies with her mom, only she switched back halfway through the deed — was awfully creepy, right? Sorry, Mom!

* Loved David’s cocky prediction to Syd about the Division 3 battle: “It’ll be fun. Kick some ass. Save the girl. Get a snack.” (Did he ever get that snack, though? Man, another burning question left unanswered by this show!)