Were you hoping that things would start to make sense this week on Legion? Well… my condolences. But we did see some action!

David’s still stuck in that sedated dream from last week, and even Ptonomy can’t seem to pinpoint where his mind is, saying he’s “somewhere between memory and a dream.” Melanie wants to know how David ended up in Clockworks, so Syd, Ptonomy and Kerry go snoop around his old therapist Dr. Poole’s office. Ptonomy finds the doctor’s tape recorder all busted up, and searches it for memories. (Yeah, he can do that with objects, too.) He sees a vision of Dr. Poole badly wounded, with David standing over him. Syd doesn’t want to believe her beloved David could do something like that. Ptonomy, well… he thinks maybe he could.

Syd also learns a little more about Kerry: namely, that she and Cary don’t just share a name; they share a body. (We saw a hint of that last week with Kerry entering Cary’s body.) Kerry seems OK with it, though: “He does the boring stuff… I get all the action.” Plus, she only ages when she’s outside his body, which is a pretty sweet deal. And we learn that Melanie’s husband has been preserved in ice, frozen inside an old-timey underwater diving suit. Melanie cradles his body and weeps: “Come back to us.” Maybe he’s in suspended animation, like Walt Disney’s head? 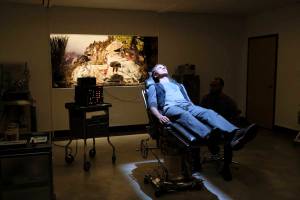 Alright, so where the heck is David? Well, he’s drifting through some kind of alternate dimension, walking on a sea of glowing green dots. He sees a guy in that same diving suit and follows him up a ladder to an ice-covered bachelor pad. The guy is Oliver (Jemaine Clement), who offers David a drink and plays him some atonal free-jazz with squealing horns. Oliver tells David he’s now stuck in a place where every day is the same, and nothing is real. (If you’ve been watching Legion, you know the feeling!)

Oliver’s happy to finally have a companion: He excitedly recites some weird beat poetry for David and reassures him that “The Monster… can’t get you in here.” (We can see the Devil With the Yellow Eyes lurking outside the ice palace.) David just wants to leave, and figures since he’s a highly gifted mutant, he can just use his powers to get out. But after he comically flails for a while, Oliver just shows him a door, leaving him with these parting words: “It’s not real, unless you make it real.”

Meanwhile, Syd and Ptonomy visit David’s ex Philly at her realty office, posing as home buyers so Ptonomy can scan her memories. He finds a memory of Philly tracking down Dr. Poole at a lighthouse, and that’s enough for him — but Syd keeps pressing Philly about David. Philly says he was sweet, but he had this no-good friend named Benny. No, not Lenny: Benny, a guy. And when Syd asks if Philly has any message for David, she says, “Tell him… they’re watching.”

They head to the lighthouse to find a retired Dr. Poole, who confirms Philly’s story: Benny was indeed a guy, and had a “negative effect” on David’s treatment. But something’s off, and Kerry realizes: “It’s a trap.” Dr. Poole is actually The Eye (he can shape-shift?!), and Division 3 soldiers pummel the lighthouse with gunfire, forcing Syd and Ptonomy to flee upstairs. Kerry, who’s been itching for a fight this entire episode, is happy to finally see some action, hurling herself out a window to take on the soldiers. 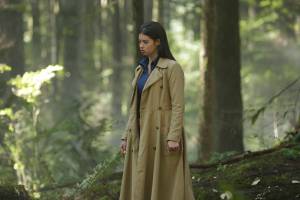 This leads to Legion‘s best action scene yet: As Feist’s ethereal rocker “Undiscovered First” plays underneath, Kerry karate-kicks the hell out of some soldiers while her bodymate Cary kicks along back at the lab. (They eventually get the best of her, though.) The Eye follows Syd and Ptonomy upstairs, and when Ptonomy fires bullets at him at point-blank range, The Eye just keeps walking. He puts his hand on Ptonomy’s skull, knocking him out, but when he turns to Syd, she takes off her gloves and touches her hand to his. Body-switch time! When soldiers arrive, “The Eye” (really Syd) tells them to put “Syd” (really The Eye) in their van. “Syd” tries to explain, but “The Eye” kicks her in the face, knocking her out.

David’s still in dreamland, and Lenny’s taunting him again, showing him a vision of The Eye looming over Syd with a knife to get him riled up. It does the trick, because David freaks, and teleports himself to the woods, where he forces The Eye’s van to careen off the road and crash. He thinks he’s rescuing Syd, and hands her a knife — but she’s really The Eye! “She” leans in to stab David in the back, but just in time, “The Eye” flings a knife at her, knocking the knife out of her hand.

“Syd” runs off down the road, with David and “The Eye” giving chase. David tackles “The Eye”… but then “he” morphs back into Syd. The Eye, back in his own body, pulls out a gun and fires, hitting Kerry in the shoulder. (Cary suffers along with her, back in the lab.) As she lies bleeding on the ground, Ptonomy rushes to her aid, and David sits stunned… as Lenny’s hand creeps up his shoulder.

* So yeah, I wouldn’t say this episode “made sense”… but it was a lot of fun, wasn’t it? It delivered the kind of kick-ass action we (and Kerry) have been waiting for — and I’m always a sucker for Jemaine Clement.

* My theory: This guy Benny has some connection to the Devil With the Yellow Eyes. Didn’t he kind of look like a less bloated version of the Devil? Maybe David accidentally killed him with his powers, and that guilt is haunting him?

* Also worth noting: that prison-cell conversation between Amy and David’s Clockworks therapist Dr. Kissinger. So David’s childhood beagle King never existed?! So can we trust anything we think we know about David’s past, including his parents?

* We already know The Eye is a mutant; Melanie said he used to be at Summerland. And it looks like his powers include shape-shifting, invincibility and some kind of Vulcan neck-pinch finishing move. But how did he end up going over to the dark side?

* I wouldn’t mind hanging out and having a cocktail with Oliver in his groovy Fortress of Solitude. But please, Ollie: Let someone else choose the music.

Wanna help us make sense of tonight’s Legion? (Please?) Drop your thoughts in a comment below.