Another week of Legion, another week of delving into the thicket of repressed angst that is David’s brain. But things got even wilder this week… and more dangerous for everyone involved.

David is still worried about his sister Amy, who’s being interrogated by that Phil Spector-looking creep, The Eye. But he dives back into more memory work with Melanie, who promises they’ll speed things up by focusing on big events. (“The s—t that scares you the most,” as Ptonomy puts it.) They zap back into David’s memory of that kitchen-utensil tornado, and Melanie sees it in full for the first time, with plates and bowls exploding into the air. She realizes he’s not just a telepath; he can control things with his mind. “Control may be an overstatement,” David grumbles.

They rewind to see what led to this, and find David and Lenny enjoying some “vapor” when his girlfriend Philly walks in on them. But then Ptonomy starts to vibrate. “He’s resisting again,” he tells Melanie. Then David spots the Devil With the Yellow Eyes and freaks out, and suddenly they’re all sitting back in Summerland again — but in a different room. Ptonomy marvels that David managed to teleport them “six hundred feet, through two solid walls.” He finally asks David, “What are you?!” 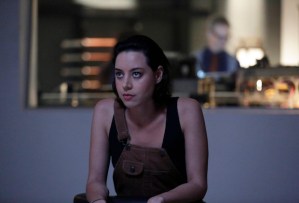 To find out, Cary straps David into a chair, sticks sensors on his face and injects him with a dye, all to model David’s brain waves. Cary tells him to think of something stressful (uh-oh), and David flashes back to a childhood Halloween where the main character from that children’s book, The World’s Angriest Boy in the World, comes to life and chases after him. Plus, Lenny appears in the lab and taunts David, telling him “commandos are gang-banging your sister” while he’s busy working on his feelings. This sends David into freak-out mode: The lab’s lights turn red and the controls fritz out as David begins levitating (!), drawing him and Syd into a glowing ball of white light (?). Whoa.

Somehow, David and Syd have teleported to Amy’s interrogation room, where they watch a guy from Division Three yell at Amy to help him find David “so I can turn him off.” They’re not physically there, but The Eye sees them and even reaches out to touch them before they disappear. They rematerialize in a lake at Summerland, and Syd tells David that if he ever gains control of his powers, “you’re gonna be a world-class badass.”

Melanie warns them about The Eye, saying the guy (then known as “Walter”) was one of the first mutants her husband brought into Summerland, but “he wanted to hurt people.” She insists on sedating David to get access to his mind without him resisting, and she, Ptonomy and Syd zap back to the incident that landed David in Clockworks. They’re joined in Memory World by a child version of David, since his adult rational brain is asleep. And since Syd can actually touch people in this realm, Child David gives her a big hug. Aw! (Hey, we have to take our little pleasures where we can find them on this show.) 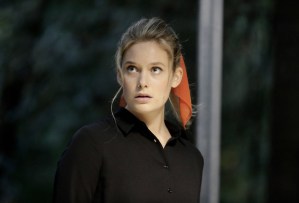 But things don’t stay adorable for long: While they watch David break into his therapist’s office to steal stuff, Syd has nasty visions of David eating audio tape and a huge red crack opening in the wall with demonic hands coming out of it. Then Child David runs off, and Syd chases him through hallways and into a heating vent. She looks back to see the World’s Angriest Boy pursuing them, and then the Devil With the Yellow Eyes. It’s all so intense that Syd wakes herself up screaming. She wakes up Ptonomy, who asks her what happened. “Yeah, we’re gonna have a long conversation about that,” she says.

Melanie’s still in there, and it gets weird for her, too: She enters David’s childhood bedroom and finds the World’s Angriest Boy book. She’s horrified by the violent text and images — and then the book slams shut on her hand. She screams, the Devil With the Yellow Eyes floats behind her, her hand becomes a gnarled claw… and she wakes up screaming. But her hand’s back to normal. And David continues sleeping, with nightmarish visions of people surrounding him and screaming at him.

So here’s where I put on my critic’s cap for a minute: Doesn’t this show feels like it’s been stuck in neutral the last two weeks? I adored the pilot, and I still love all the visual flair and surreal weirdness we’ve seen so far. But what has it all added up to, besides confusion? Have we learned anything about David that we didn’t already know after the pilot? Next week’s Episode 4 is a big one for me: I really want to see the story expand beyond David’s mind and involve some real-world consequences, so I can get invested again. Because otherwise, this show is just full of garbled psychology and cool CGI, signifying nothing. 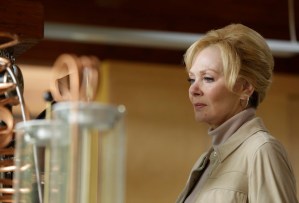 * I did love Melanie’s morning chat with the coffee maker, elegantly voiced by Flight of the Conchords alum Jemaine Clement. That’s her husband, who helped found Summerland and whose voice is all over the facility. And notice she didn’t tell Syd that her husband died. So maybe we’ll get to see Clement in the flesh by season’s end?

* Aubrey Plaza always gives this show a nice energy boost whenever Lenny’s on the screen. “Unhand the reptile, space captain!”

* David and Syd’s body-switch talk got a little… graphic, didn’t it? But I enjoyed her Zen perspective on her powers putting her in a hundred different bodies: “Everywhere I go, I’m me.”

* In the Halloween flashback, was young David dressed as Louis Tully, the Rick Moranis character from Ghostbusters? I couldn’t tell for sure, but that colander on the head looked familiar.

Are you frustrated with Legion’s slow pace so far? Or are you still digging the vibe, man? Drop your thoughts in a comment below.