After an absolutely bonkers series premiere that we’re still trying to make sense of, Legion slows down in Episode 2 and goes inward, deep into the twisted psyche of gifted mutant David Haller.

We pick up with David and Syd escaping into the woods and ominous military men (and that creepy henchman guy, The Eye) in hot pursuit. They arrive safely at Summerland, a gorgeous architectural marvel of a mutant retreat run by Dr. Melanie Bird. She shows David how to filter out all the noise in his head, like turning down a giant volume dial, and use his telepathic skills to hear her thoughts. Then she tells him to rest up: “Tomorrow, memory work begins.” 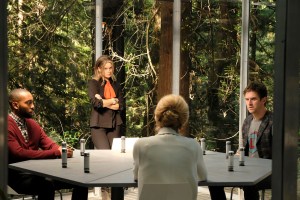 And she wasn’t kidding when she called it “work”: The next day, along with “memory artist” Ptonomy, she sits David down at a table with these weird metal rods that they all grab onto so they can enter David’s memories together. (Exploring his past will help him better control his powers, Melanie says.) They zap back to a memory of David as a kid chasing his sister Amy in a field, while they stand at a distance, observing. “Pretend we’re in a museum,” Melanie tells David. “The Museum of You.”

But it’s not all happy memories. While remembering a bedtime story his astronomer dad used to read to him — a macabre book called The World’s Angriest Boy — the room starts to shake, and David freaks out, releasing the rods. In fact, he struggles so much that Ptonomy’s forced to knock him out. When David comes to, Ptonomy hands him a glass of milk and reassures him: “The first time is always the worst.” But when Ptonomy asks about that bedtime story, David pretends not to remember it. He knows you’re lying, David; he saw it in your memory! 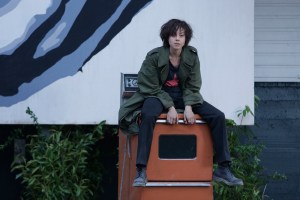 While David is knocked out, we see another vision from his past: him as a glassy-eyed addict in a therapist’s office. He talks about his recent breakup, and offhandedly mentions “the vapor.” What’s that, you ask? We find out when David leaves therapy and finds Lenny waiting for him, sitting on top of an old stove. She got it from “some girl I finger-banged,” and trades it in a back alley for a tiny vial of blue liquid. She and David take that vial back to his place, drop a few drops of the blue liquid into a frog-shaped vaporizer, inhale the fumes and lie back with goofy smiles on their faces. Ladies and gentlemen, “the vapor”!

Back in the present, David tells Syd he doesn’t understand what all the memory work is for. She encourages him to stick with it — but she still doesn’t want him touching her, even with gloves on. To her, human contact feels “like being covered with ants,” she says. David isn’t deterred, though: “We’re having a romance of the mind.” And later, he figures out how to read her mind… which she’s not sure she really wants him doing. She does use her thoughts to “tell” him he’s cute, though.

As Melanie and Ptonomy continue to poke around in David’s psyche, they notice him tensing up when he catches a glimpse of that ugly beast, the Devil With the Yellow Eyes. And Ptonomy also notices a “glitch,” a slight gap in David’s memory in the therapist’s office. It turns out to be a vision of David’s kitchen-utensil tornado from last week, but when they try to go back there, they end up in David’s childhood bedroom instead. Even a seasoned memory artist like Ptonomy is stumped: “He’s too strong,” he tells Melanie.

The next step for Melanie and company: sticking David into an MRI tube and examining the contours of his brain. (Technician Cary tells David, “You have an extremely large amygdala,” and David thanks him for the compliment.) But while in the tube, David has visions of his sister Amy looking for him at the psychiatric hospital, only to be told David was never a patient there. Then he sees Amy being confronted by The Eye, which freaks him out enough to send Cary’s equipment into overdrive. After some creepy noises and another sighting of the Devil With the Yellow Eyes, David wakes up lying on the floor — and the entire MRI tube has been launched outside by his sheer psychic powers. 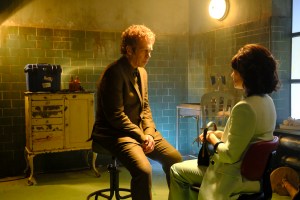 Sensing his sister’s in danger, David packs up to leave Summerland, but Syd stops him in the elevator. (She even offers to hold hands if he’ll stay!) She encourages him to “do the work” and learn the true magnitude of his powers, and then he can rescue Amy. Besides, they won’t kill her, Syd says, “because she’s bait.” And speaking of bait: The episode ends with Amy seated in a scary room when The Eye enters… and produces a fish tank full of leeches. He sits down uncomfortably close to her and asks, “Shall we begin?”

Is David making a mistake by not rescuing his sister? And is this all making more sense to you now? (Or less?) Join us for post-Legion talk in the comments.