Yes, technically, FX’s new drama Legion is a “comic-book show.” But it doesn’t feel like — or look like — any of the superhero shows currently on TV.

The Legion series premiere (airing Wednesday, Feb. 8 at 10/9c) is an incredibly colorful, highly stylized drama with heavy psychological undertones… and no capes or tights in sight. At the Television Critics Association winter press tour on Thursday, the cast and producers laid out why they wanted their show to stand apart from the current superhero trend. 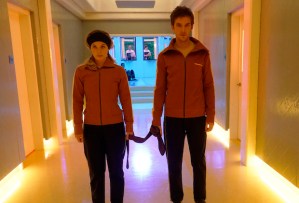 Creator Noah Hawley (Fargo) is definitely a fan of the Marvel comics the show is based on, but he wanted to make sure it appealed to non-comic fans, too: “If we remove the genre, is there a compelling show that you would want to watch there?” The key to the show, he says, is starting with “this epic love story” between tortured mutant David (Dan Stevens) and fellow mental patient Syd (Rachel Keller) and then “putting the genre back in it.”

The Legion comic books are part of the X-Men universe, since David is the son of legendary mutant Professor X. But aside from David, the characters on the FX series are all new inventions, and Hawley wanted to use the source material as a springboard to tell his own story, as he did with Fargo: “I’m a fan of all the comics and all the storylines in them, but I thought there was a story that’d be great to tell using them as a template.” Above all, he said, he wanted to “create something unexpected.”

It’s even hard to pin down exactly what time period Legion takes place in; it’s styled like movies from the ’60s and ’70s, but we also see futuristic technology at times. Hawley says that’s deliberate, because the show puts you inside David’s mind: “You’re experiencing what he’s experiencing. His perception of reality is: Some of it feels retro, some of it feels futuristic.”

But the Marvel brass seems happy that Legion is toying with genre expectations. Executive producer Lauren Shuler Donner, who works on the X-Men films, sees Legion as “a chance to bring the X-Men to television, to mine some of the characters that we won’t be using in the movies.” And EP Jeph Loeb, from Marvel TV, says that the show “redefines the genre in a new way,” calling it “the kind of show that Marvel’s never made before.”

One element from the comics we should be seeing soon, though: David/Legion’s trademark towering hairdo. A close-cropped Stevens promised, “We’re working up to the full Legion hair in the comic books.” Hawley added, “Yeah, you’ve got to start growing that.”