This Is Us‘ William probably didn’t plan for his memorial service to heal major rifts within the Pearson family, but then again, knowing that wise old owl, maybe he did.

Because the celebration of Randall’s dad’s life foments great progress for many members of the gang, most notably Randall and Kevin. Read on for the highlights of “What Now?”

IN SEARCH OF A TRIBUTE | We open on Randall standing in his biological father’s former bedroom at the house, wondering how he can honor William’s legacy. “Do I start wearing sweater vests?” he wonders aloud. (Heh.) Beth then finds a letter from the old man to Tess and Annie: He wants them to plan his memorial, because adults make these kind of things too sad. The girls take their duties (which include getting Kate to procure rainbow balloons on short notice) very seriously, but they allow their dad to prepare a eulogy… but they make him call it a “toast.”

Jessie calls Randall, saying that he is in Chicago and that he and William said goodbye privately before the Memphis trip. He shares some stories from the Narcotics Anonymous group, calling William “a soft armrest for weary souls to lean on.” (Ooh, that’s good, Randall. Write that down!) Randall’s work sends a box of pears and a generic note, to which Beth gives the Raised Eyebrow of Hmmph. I mean, even the mailman cries when he finds out William died. Way to be heartless, Randall’s work.

MOVING ON | On the day of the “fun-eral” (© Randall), Kate is on edge and Rebecca is worried that things are still strained between her and her son. But the girls’ insistence that everyone celebrate their grandfather by enjoying a recreation of his perfect day takes the focus off interfamily dynamics for a little while, at least. When Randall finds a teary Beth in the kitchen, though, she points out that while Randall had the trip to Memphis and the girls had the memorial to plan, “I never got a chance to say goodbye.” (Side note: Nice to see that Beth isn’t emotional ballast all the damn time.)

With that in mind, Randall hands “toast” duties over to his wife when the time comes. “I can look all over this house and see the memories that we shared,” Beth says, speaking off the top of her head. “He was endearing as hell, and even though we only had him for a few months, he’s part of our family now,” she adds, starting to cry. “We’ll remember things as ‘before William’ and ‘after William’ now.”

Kate runs from the room, crying, and shuns Toby’s comfort but sobs in Randall’s arms in the driveway, saying that the old man’s death has stirred up a lot of her painful feelings related to Jack’s passing. Randall says he had a dream about Jack and William sharing stories, then advises her to talk to Toby about her feelings, because it’s the only way she’ll ever get a handle on them. (Side note: LOVED this scene. More Randall/Kate stuff, please.)

The girls then decree that everyone put on one of William’s “old man hats” and stroll the route he walked every afternoon. The constitutional offers Rebecca an opportunity to confront the awkwardness between the two of them, and she takes it. She cries as she explains how she kept chickening out on telling him the truth about his biological father. “It was selfish, and it was wrong, and I want you to know from the bottom of my heart that I am so sorry you didn’t have more time together, that it was my fault you didn’t have more time together,” she says. Randall quietly and calmly replies that he had enough time with William to know that he loved him and that William loved him back. And just like that, everything is kind of OK again between mother and son.

Oh, and later? Beth smiles as she gets her own adios from William, via a Memphis postcard he sent before his death. 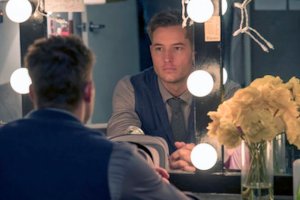 TAKE A BOW | Sophie’s planning to come to Kevin’s play, but she’s going to avoid his entire family — “especially Kate.” Kevin wants to go public with their relationship, and he also wants to sleep with his ex-wife again, but Sophie shelves both of these concerns and tells him to focus on convincing the New York Times theater critic to come to the play’s second opening night.

He doesn’t succeed, but the entire family is super impressed with Kevin’s performance. “There is now a man where the Manny once stood,” Randall remarks.

But Randall’s not done with his pitch-perfect pronouncements for the evening. So he stops by his firm, where the team is pulling an all-nighter, and confronts his boss, Tyler, about sending lame fruit — which it turns out Randall is allergic to — before quitting as a means of honoring William’s legacy. And he strolls out of there happy.

Meanwhile, back at the theater, Sophie consoles Kevin about the Times critic’s absence. But he says that seeing his family and her in the audience meant more to him. “I’m not messing things up with you again,” he promises, adding that he’ll wait until she’s convinced. “I came here for you, Sophie.” And that sound you heard? It was Sophie’s bra hitting the ground, alongside her inhibitions.

To top off the evening, Ron Howard (!) happened to have been in the crowd that evening, and he calls Kevin to offer him a potential part in a new movie… in Los Angeles.

‘IT’S MY FAULT’ | In the past, Jack is late coming home before Rebecca leaves on tour, and though things are rather tense, there’s still a warmth that surfaces between them before bandleader Ben honks his horn and Jack remembers that he wants to be a standoffish jerk about the whole thing. Jack gives Rebecca a brief peck on the cheek and a curt goodbye; when Kate admonishes him, he relents and goes outside to say farewell properly… only to see Ben’s van zooming away.

But Kate won’t let her dad off the hook, asking why he didn’t go to that night’s show, despite the fact that it’s only a couple of hours away. He dismisses her concerns, telling her not to worry about him… then hightails it to the bar where a co-worker’s retirement after-party is taking place. And oh, hey, there’s office hot chick Heather, who looks very happy to see Mr. Pearson show up.

Heather puts her hand on his thigh, which Jack quickly shuts down. “You’re embarrassing me. You’re embarrassing yourself,” he says derisively before abruptly getting up from his barstool and making a phone call to see if the kids can stay the night with friends.

In the present, we see Kate tell Toby, “It’s my fault. I’m the reason that he’s dead.” And in the flashback, a clearly inebriated Jack gets in the station wagon and speeds off.

Now it’s your turn. What did you think of the episode?