Need to catch up? Check out the previous This Is Us recap. And beware: This post contains major spoilers for Tuesday’s episode.

William’s father both sings to his unborn son and dies at war within the first two minutes of this week’s This Is Us. And if that flashback does anything, it sets the joyful/mournful tone for an episode we’ve known was coming from the moment Randall’s dad announced that he had a terminal illness.

The hour is beautiful. It features great performances by Ron Cephas Jones and Sterling K. Brown. And oof, it hurts so much when, at the end, William succumbs to his cancer and dies while on an interstate roadtrip with his biological son.

So, imagine me putting my palms on either side of your face. Just breathe. We’re gonna all get through this together: Here are the highlights of “Memphis.”

ROAD TRIPPIN’ | We open at Randall’s psychiatrist’s office, where Beth is putting up a strenuous and multi-tiered objection to her husband’s desire to drive William back to his birthplace of Memphis. Randall was in the hospital for a few days following his breakdown, we learn, but he’s feeling much better, is taking some time off work and has recovered sufficiently to give tease Beth as she lists all the reasons he should stay put. “You two sure are adorable,” the doctor says. He must’ve had his nose stuck in a medical journal all season, because the rest of us figured that out in the pilot.

When Randall very calmly yet pointedly says that his father doesn’t have much time left… it’s settled. Beth is still not on board, but resigned. The two men leave early one morning, after William kisses his granddaughters goodbye as they lay mostly asleep in bed. Randall’s got a whole plan about how they’re going to go old school with maps and such, but William throws the maps out the window. “Just drive, son,” he says, settling into his seat. “We’ll get there. Just drive.” 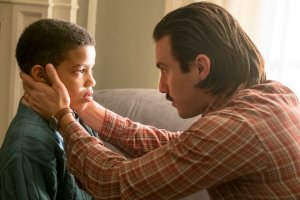 WILLIAM MEETS JACK | During the ride, William keeps thinking about his mother, who left him in Memphis when he was a young man so she could care for her sick mother in Pittsburgh. “You have so many beautiful futures in front of you,” she tells him at the train station just before she goes, and they’re both a little sad.

In the present, William asks Randall to tell him about Jack. That leads to stories about Jack’s great laugh, and how the elder Pearson would help Randall get his anxiety under control by putting his hands on either side of his face and telling him to focus on breathing. William then demands to go see the tree where some of Jack’s ashes were scattered, and even though Randall protests that it’s a half day outside of their route, they wind up there anyway.

No, YOU’RE crying at an old man talking to a tree.

AMENDS AND A BAND | In William’s memory, we see his mom staying in Pittsburgh and getting a job while he continues to live a lonely, straitlaced life in Memphis. He winds up playing with his cousin’s cover band — that cousin is played by Atlanta‘s Bryan Tyree Henry — which becomes a legit musical outfit after William starts writing them some really good original songs. But when William’s mom becomes quite ill, he has to borrow some money from his cousin and travel to Pennsylvania… where it’s clear that William’s mama is dying.

In a montage, we see William meet Randall’s mother, Laurel, on the bus. They fall in love and take care of his mom until the end, but in his pain, he turns to the drugs that Laurel been doing for a while. And we all know how that story ended. And in the present, when William and Randall arrive at the bar where he used to play, William’s cousin is not happy to see him.

“I was ashamed at what I had become,” William admits, apologizing for ghosting on the band all those years ago. He turns to leave, but the cousin stops him by asking him if he’s too sick to play. “I’m never too sick to play,” William says. And the next thing you know, Randall is a little tipsy and hanging out with newly met cousins of his own while his dad tickles the ivories onstage with the band. Everyone’s happy. Life is good!

… Until the next morning, when Randall finds William in bed and gasping for air. At the emergency room, William’s doctor says the old man has “hours,” not days, and that there’ll be no more Tennesee sightseeing on the agenda, because William’s organs are shutting down and he “is not leaving this hospital.” (Side note: The way it finally sinks in for Randall then, and the way he starts crying, is all thanks to some subtle, powerful work on Brown’s part. Beautiful.)

THE END | So, to put it bluntly, all that’s left is for William to die. He gives Randall the manuscript of poems we saw him with earlier this season and shuts down Randall’s desire to fly Beth and the girls there to say goodbye — he knew he was leaving forever when they set out on the road trip, and he doesn’t want them to remember him in a hospital bed. “You deserve the beautiful life you’ve made,” William tells his son, adding that he feels blessed to have had both his own mother and Randall in his life — “the person at the very beginning and the person at the very end.”

When the old man admits that he’s a little scared, Randall does for his father what Jack did for him all those years: puts his hands on his face and tells him to breathe. (Side note: This particular part absolutely ruined me.)

While an acoustic cover of the song William wrote plays in the background, we watch a montage of memories from his life, ending with him as an adult giving his mother (circa the age she was when he was born) a hug. Later, Randall drives home with William’s effects in the car with him. He stops when a family of ducks — like the ones at Memphis’ Peabody Hotel, which William never did get to show his son  — cross in front of the car. Randall takes his late father’s advice then, and rolls down the windows, turns up the music, and keeps driving.

Now it’s your turn. Were you as emotionally ravaged by the episode as I was? Hit the comments and let us know!