If Sunday’s episode of The Walking Dead had revealed that things had gone badly for Eugene at the Sanctuary, nobody would have been surprised, right? But was anyone not shocked when it appeared that, instead, he himself had gone bad? Is this the beginning of the “treachery from people we trust” that we were forewarned was coming? Would Abraham’s BFF really betray Alexandria for access to video games and a jar of gherkins? Or is he merely snowing Negan & Co.? Read on, then we’ll discuss in the comments section.

‘WELCOME HOME, HAIRCUT’ | As “Hostiles and Calamities” began, we flashed back to Dwight discovering, in short order, Fat Joey’s body, Daryl’s empty cell and the “Go now!” note that implicated Sherry in the prisoner’s escape — and the Savior’s day was about to get even worse. While Laura showed Eugene to his well-stocked apartment and offered to bring him any snack short of lobster, Dwight was getting beaten up and tossed in solitary. There, he learned from Negan that he was short a wife — Sherry. If, as Dwight insisted, she hadn’t slipped Daryl the key to his cell, had Dwight done it? “You were supposed to break him,” Negan said. “Did he break you?” After Dwight insisted that no, that wasn’t the case, he was still as much Negan as ever, he was allowed to have Carson stitch him up before heading out to retrieve Sherry. In the infirmary, the doc suggested that Dwight’s big-hearted former wife had felt so sorry for Daryl that she must have set him free. Dwight, on the other hand, wasn’t troubled by feelings, the doc observed. “You get it.”

Elsewhere in the Sanctuary, Eugene’s whimpering had diminished considerably by the time Laura explained that he was one of the elite, not one of the workers. Key difference between the groups: “They eat s—, we eat good.” (Of passing interest: Eugene spotted a kid stealing but said nothing… at least not yet.) During his audience with Negan, Eugene became so desperate to convince the villain that “I am indeed a smarty pants” that he pulled out his old B.S. story about working on the Human Genome Project. Unsatisfied, Negan challenged the brainiac to solve a problem for him: How could they keep the walkers used to “guard” the perimeter from deteriorating and falling apart on them? Eugene’s solution: Melt down scrap metal and pour it on the walkers to keep the bodies intact. So impressed was Negan by this “practical and badass” idea that he rewarded Eugene with a (sexless) night with some of his wives. (Of note: As Eugene walked away, a private smile crossed his face — which certainly gave me hope that he was pulling a Carol and just playing a role for the Saviors’ sake.)

‘SHE JUST DRINKS AND CRIES’ | That evening, Eugene delighted Amber, Tanya and Frankie with some Mr. Wizard pyrotechnics. Well, maybe not Amber. Mark’s former girlfriend — remember Mark, the dude Negan ironed? — was too busy getting drunk in response to their status as slaves. Apparently, she did that a lot. So much so that the next day, Tanya and Frankie asked Eugene to help their pal end her unhappy life by whipping up a fatal pill. On second thought, make it two, Tanya said. In spite of the red flags the women were waving, Eugene let their talk about what a good man he is convince him to grant their request, provided they got him Amber’s exact weight. Once they had, he went so far as to cut in line and declare himself the Sanctuary’s new chief engineer in order to score the drugs that he needed. Just for good measure, he also snagged, among other items, a bedpan, a flyswatter and a stuffed toy that he decided to call a Grembly Gunk. (Fitting in too well?)

Meanwhile, as Dwight showed up looking for Sherry at their old house, we heard a voiceover of her reading the letter she’d left him. In it, she remembered them agreeing that, if they were ever separated, this was where they would go — with pretzels and beer. Only she was sure, bad as his memory was, he would have forgotten that by now. As he confirmed that it was her handwriting on the note to Daryl, her voiceover continued. “You didn’t want to live in that world, and I made you” — to keep him from dying, she said. “You’ve become everything you didn’t want to be, and it’s my fault.” That was why she’d let Daryl go — because he reminded Dwight of who he used to be, and she wanted to let him forget. After admitting that she didn’t imagine she’d make it out in the world — but that it was still a better fate than the Sanctuary — she closed by writing, “I loved who you were. I’m sorry I made you into who you are.” Sadly, not only had Dwight remembered where to meet her, he’d brought beer and pretzels. 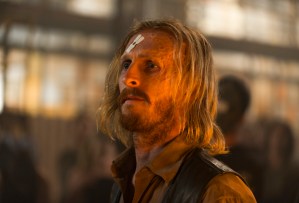 ‘WE DON’T GET TO HAVE BIG HEARTS’ | Upon returning to the Sanctuary, Dwight told Carson that he’d found Sherry, but she’d run from him — right into a bunch of walkers. “So I made it quick,” her former husband said, stealing suckers as foreshadowing. Later, Eugene was called in to join the crowd observing Negan disciplining someone — Carson! Seems Dwight had lied to Negan that, before Sherry had died, she’d said that the doc had freed Daryl so as to be seen by her as a hero. Knowing Negan would suspect her, Sherry had then fled. Furthermore, on Dwight’s last visit to the infirmary, he’d hidden a scrap of Sherry’s letter (“Goodbye. Honey”) in the sucker’s desk to serve as physical evidence of her connection to Carson. (Credit where it’s due: Nice frame job, Dwight.) For a long, tense moment, it looked like Negan was really going to iron the doc’s face. But once Carson “confessed,” Negan… holy crap! Threw the guy headfirst into the oven! Afterwards, Dwight continued to wow the boss by saying it didn’t bother him that Sherry was dead. “Ice cold,” Negan marveled. “I love it.” (Mind you, the look on Dwight’s face suggested that he was up to something, perhaps a last-ditch attempt to be the man he once was.)

Off that horrifying scene, Eugene, having deduced why Tanya and Frankie wanted not one but two pills — to murder their “husband” (duh) — informed them that he wouldn’t be handing over the poison. When Frankie threatened to tell Negan, Eugene shrugged that they were replaceable, Dr. Smarty-Pants was not. He didn’t even seem to care when Tanya called him a coward. “That is a correct assessment,” he replied. (He couldn’t have really backslid that far, could he?) Next, Negan showed up at Eugene’s door, worrying him by offering that Frankie and Tanya had “nothin’ but good things to say about you.” Of course, Negan only really had one question for the pickle-loving newcomer: Who are you? “I’m utterly, completely, stone-cold Negan,” Eugene answered before Negan was even finished asking the question. “I was Negan before I even met you, I just needed to meet you properly to know.” (Could he really have been broken? He only heard “Easy Street” once, for Pete’s sake.) As the episode drew to a close, Eugene barked at workers, Savior style, as they metalized walkers and reintroduced himself to Dwight (whose johnson, you’ll recall, he’d already met). In addition to establishing their actual names, however, Eugene noted, “We are Negan.”

So, what do you think? Has Eugene really drunk the Kool-Aid? Or are he and Dwight in cahoots to take down the Saviors from the inside? Hit the comments.