Did The Walking Dead somehow think that we didn’t already hate Negan enough? Perhaps. Because Sunday’s episode sure seemed designed to make us loathe him more. Over the course of the plus-sized “Sing Me a Song,” he made one character wet his pants and several others cry, treated Daryl like a scruffy butler and got way too close for comfort to… On second thought, keep reading. We’ll get to that. 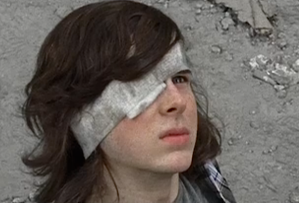 ‘YOU ARE ADORABLE’ | Early on, as the truck heading for The Sanctuary neared its destination, Carl conned Jesus into jumping out before him, then remained in the vehicle so that he could carry out his revenge plot… which went about as well as you’d expect a teenager’s murder attempt on a well-guarded megalomaniac would go. After Carl killed two Saviors and was apprehended, he flashed what Negan noticed was “the same damn stink-eye as his dad,” only half as good, what with the boy only having one eye and all. Yet, even though it meant that Negan would’t have time to “screw any of [his] wives today” — except maybe one, he added for Dwight’s “benefit” —he decided to give his new guest a tour of the stronghold.

First, Negan gave Carl a ringside seat as he intimidated Sherry into revealing that yes, sister wife Amber had been with a Savior named Mark when he had been supposed to be working, which was unacceptable for two reasons: 1. Mark had been supposed to be working, and 2. Negan’s wives aren’t allowed to cheat on him, even with their “ex” husbands and boyfriends. Why had Sherry been so reluctant to rat out Amber? Negan asked. After all, he never hit them. “I know you,” she replied. “There’s worse.” Off Sherry’s confession, Negan gave Amber the option of leaving him for Mark, which sounded somehow even scarier than staying with the psycho. So, with the young woman’s awful decision made, Negan sent for Doc Carson and delighted in making out with Sherry in front of Dwight while Daryl stood around with a tray of snacks like a quieter Alice from The Brady Bunch.

‘I WANT YOU TO SING ME A SONG’ | Ushering Carl to his bedroom chamber, Negan instructed the youngster to take off his eye bandage. The villain had to, just had to see the wound for himself. All wrapped up, “it’s like talking to a birthday present,” he said. Though revealing the missing eye reduced Carl to tears, Negan continued teaching a master class in insensitivity, asking if he could touch it. But then, the weirdest thing happened: The jerk apologized. And then, a not-at-all-weird thing happened: He went right back to being an a–hole, forcing Carl to sing for him. (Chandler Riggs’ heartbreaking stab at “You Are My Sunshine” is sure to rank right up there with Linda Gray’s “People” on Dallas as one of the most harrowing musical numbers in TV history.)

Afterwards, Negan had Carl hold Lucille as he speechified to his minions about the importance of rules, and reminded them that, if they broke a rule, that was it — it was the iron for them. That being the case, while Carl and Daryl, and Dwight and Sherry, exchanged meaningful glances, the Saviors’ leader burned Mark’s face until he peed his pants and fainted. As the crowd dispersed, Carson treated Mark and Daryl mopped up the piss, Dwight and Sherry rendezvoused in the stairwell to bicker over the impact that their return to The Sanctuary was having on others — she cared, he didn’t, arguing that anybody who was still standing at this point was standing on someone else’s back.

‘WHY HAVEN’T YOU KILLED ME, OR MY DAD, OR DARYL?’ | Meanwhile, Negan — still refusing to let Carl cover up his missing eye, just ’cause — explained that he hadn’t offed Daryl because he was going to become a good soldier, he hadn’t offed Rick because he was a good scavenger, and he hadn’t offed Carl because it would be more productive to break him. “More fun, too,” he added. (Enough. We get it — Negan is a horrible, no-good, bad, bad guy.) What did Carl think? He thought Negan should jump out the window to save him the trouble of killing him. At that, Negan decided to return his guest to Alexandria (with sneaky Jesus along for the ride). When Daryl warned Negan not to hurt the boy, he got thrown back in his cell for a time-out. (Soon, a key was slipped under the door with a note: “Go now.” Gee, thanks, Sherry! At least it was presumably Sherry.)

Since Rick and Michonne were out — more on that shortly — it was babysitter Olivia who greeted Negan and Carl at the door of Casa Grimes. In no time, not only had the Saviors’ leader been cruel enough about Olivia’s weight to make her cry, but his apology had gotten him slapped since it included an offer to screw her brains out. Unfortunately, the smack only left him “about 50 percent more into” her. After sending Olivia to make lemonade, Negan took a tour of the house… and, to Carl’s (and our!) horror, for the first time discovered Judith. (Whose stomach didn’t lurch at the sight of him picking up the baby, never mind kissing her forehead?) As the episode drew to a close, he mused aloud that maybe Carl was right. Maybe he should kill him and Rick, stay put and “settle into the suburbs.” 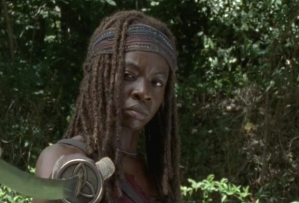 ‘I HATE RICK’ | In other plot developments, while out scavenging, Rick and Aaron discovered a well-protected stash of supplies — and weapons. Spencer scored some grub and a crossbow but earned a scolding from Gabriel by suggesting that the best thing that could happen to Alexandria would be if Rick didn’t make it back alive. (“What you’re saying doesn’t make you a sinner,” the priest assured Deanna’s son. “It does make you a tremendous s—. But just for now. It doesn’t have to be terminal.”) Eugene warned Rosita that it didn’t “matter if you’re stealthy, snipey, gun or knifey,” they still didn’t have the numbers to defeat the Saviors. Yet she still — and rather nastily — insisted that he make her a bullet. (You could tell she’d really wounded him, too, since he didn’t even want to hear her apology. Instead, “I’d like to take it back to awkward silence now,” he said.) Finally, Michonne made a roadblock of walkers, got the drop on a female Savior and ordered the woman to take her to Negan.

So, what did you think of “Sing Me a Song”? Does anyone not think that Spencer is going to try to take out Rick? Is it possible that the sight of Negan with Judith was even more disturbing than the premiere murders? Hit the comments.