The artsy start of this week’s episode of The Walking Dead made it seem like it was going to be one of those ponderous, introspective outings. (Not that there’s anything wrong with that.)

But as fast as an arrow can fly through the air, the relative calm was shattered, and by the end of the hour, one of my (your? our?) favorite characters was six feet under, and another (whom I know most of us love) was on their way out. WTF?!?

‘I SHOULDA KILLED ‘EM’ | As “Twice as Far” began, gentle as daybreak, we learned that Morgan had finished building his jail cell (to “give us some choices next time,” he explained to Rick); Rosita was sleeping with Spencer (who wooed her with “beef jerky stroganoff”); and Daryl was as haunted by the fact that he hadn’t killed Dwight (the Savior fugitive who stole his bike and crossbow) as Carol was by the fact that she had killed Paula & Co. When he asked his gal pal what her and Maggie’s captors had done to them, Carol ruefully replied, “To us? They didn’t do anything to us.”

‘YOU DID GOOD’ | After informing Daryl and Rosita that there was an apothecary nearby, Denise insisted on accompanying them on the run. (As she pointed out, she is trained with a machete!) Along the way, she opened up to them about Dennis, the twin brother who’d taught her how to drive a stick (so much better than Daryl did). When a downed tree forced them to hike the rest of the way, Daryl — ever the rebel — left the women rather than join them on the shorter route, following the tracks.

The trio reunited in time to raid the pharmacy, but neither Daryl nor Rosita were in the slightest inclined to let Denise do much more than… well, stand around and shop for a Dennis keychain. So, when they heard a walker trapped somewhere in the store, Denise — eager to prove that she’d been transformed into a fearless badass — investigated… and then nearly hurled when she discovered not only a really ripe walker but what appeared to be a drowned child, as well. (What else would you call that mess? Kid soup?)

Afterwards, Daryl — closet softie that he is — tried to cheer Denise up by giving her props for leading them to the apothecary’s treasure trove of drugs and asking about her twin, who was apparently as angry as he was brave. “Sounds like we had the same brother,” cracked Daryl. (RIP, Merle.) He even joined the women on the tracks for the trek back to the truck. 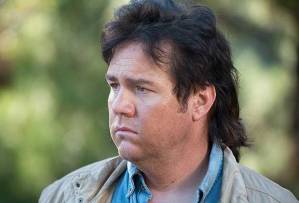 ‘YOU DON’T SPIT GAME, YOU ARE GAME’ | Meanwhile, on a mystery mission with Eugene, Abraham noticed all the changes that the brainiac had been making. He’d even tied back his “Tennessee waterfall”! What’s up with that? “The key to survival is allowing oneself to be shaped by the assigned environment,” he explained, adding, “I’m a survivor.” Unconvinced, the ginger hulk retorted, “Keep telling yourself that.”

However, Abraham couldn’t help but be impressed when he and Eugene arrived at a warehouse, and smarty-pants “spill[ed] the pintos” that he was “most definitely, almost certainly” sure that he could use the site to manufacture bullets. Alas, the moment soured when Eugene — dying to show off his new skill set — called dibs on a walker, which Abraham ended up dispatching. (For the best, no? The zombie’s head was covered in solid lead, making it awfully tough to kill.)

Ticked, Eugene informed his longtime protector that “your services are no longer required,” and, in fact, “you’ve outlived your usefulness to me.” And if Abraham hadn’t just been such a jerk to Rosita, I might’ve felt bad for him — the dismissal clearly stung. Not that he was going to admit that. Instead, he walked out, telling Eugene, “Find your own way back… a—hole.”

‘YOU WANNA LIVE, YOU TAKE CHANCES!’ | En route home to Alexandria, Denise spotted a car with a cooler in it. Well, a cooler and a walker. (Don’t they always have walkers in them at this point?) Daryl and Rosita didn’t wanna bother with it — they had what they set out for and wanted to get back. But Denise wouldn’t — couldn’t — let it go. So she pulled out the cooler and with it, inadvertently, the walker, which she dispatched all by herself, thank you very much.

Afterward, Denise puked on her glasses. But it was totally worth it to her — in the cooler was a six-pack of soda, and one of the cans was the brand that she had been trying to score for Tara! Though Daryl and Rosita joined in a chorus of “What are you, nuts?” Denise wasn’t hearing it. She was riding high (uh-oh) and giving her friends a pep talk that was as spirited as it was adorable (uh-oh!) and pfft! She was shot in the eye with an arrow… by Dwight… using Daryl’s crossbow! (This is why they should never go on a run without a redshirt!) “She wasn’t even the one I was aiming for,” said the baddie, upon emerging from the woods with Eugene as a prisoner and a buncha fellow Saviors for back-up.

At least no one else had to die — provided Daryl and Rosita escorted the Saviors to Alexandria and allowed them to take whatever and whomever they pleased. Or, suggested Eugene — on his knees in front of Dwight like a future victim of a Mob hit — if someone else did have to die, they could make it Abraham, who was lurking nearby and, BTW, was a total jerk. In the split second that the Saviors were distracted, Eugene bit Dwight’s johnson right through his jeans and, bless his heart, did. not. let. go! At the same time, Abraham opened fire, as did Daryl and Rosita, and together, they took out enough of the Saviors to force Dwight, his freed willy and the survivors to retreat.

‘I WAS NOT TRYING TO KILL YOU’ | Back in Alexandria, as Eugene recovered from a (slight) gunshot wound, he made sure that Abraham knew he hadn’t vengefully ratted him out to the Saviors, “I was looking for our moment” to attack Dwight & Co. In turn, Abraham at last acknowledged his buddy’s new skill set. “You know how to bite a d—k, Eugene,” he said. “I mean that with the utmost of respect.” (Is there another way to say that besides respectfully?)

Upon leaving the infirmary, Abraham made a beeline for Sasha’s and noted that, with all that Alexandria had going for it, a couple could conceivably spend 30 years together there. And, he added, “that’s still too short.” (For Rosita’s sake, he remains on my s—t list, but credit where it’s due: That was a sweet line.) In response, Sasha invited him inside.

Nearby, a disconsolate Daryl pocketed the Dennis keychain as he and Carol buried Denise (who, unlike Carl, wasn’t merely issued an eye patch as an accessory and sent along her merry way). “You were right” — you should’ve killed Dwight, Carol told him. “I knew it when you said it.” Off this latest loss, she broke up with Tobin — and, in a way, all of Alexandria — in a letter read in voiceover. “I love you all here,” she wrote. “I do. But I’d have to kill for you, and I can’t. I won’t.” She went on to point out that, after Rick banished her, she was never supposed to return to the fold, much less stay. So she was leaving. And, judging from the way Morgan was weighing his options — Carol’s now-empty porch swing on one side, carts full of weapons on the other — it looked like he just might follow.

So, on a scale of 1 (killing off a random day player) to 10 (killing off Glenn), how upset are you that Denise was offed? Do you think Carol is gone for good? Hit the comments! (Oh, and check out this sneak peek of next week’s sexy ‘Richonne’ scene!)