Once you’re able to move past the shock of Rayna’s passing in this week’s Nashville, one of the series’ showrunners wants you to really think about the confluence of events that put Connie Britton’s character in a doomed cop car at the exact moment a truck T-boned the car.

“In that episode where the stalker confronts her, and we have that very long scene — very rare in television to have a scene that long — what’s revealed in that scene is that this guy was highly traumatized as a child, was beaten and had a horrible father and a horrible mother,” executive producer Marshall Herskovitz says, noting that the way Rayna was able to break through to the unstable man was by pointing out her own troubled youth. In fact, “This man was drawn to Rayna in some way unconsciously because of her trauma. He felt some connection to her because of what she’d gone through.”

And if you play that line of reasoning out to its end, “If you ask me, it’s not a truck that killed Rayna,” the EP adds. “It’s trauma. She would not have been in that police car, speeding along through a red light, and hit by a truck if she had not been accosted by a man who recognized her [as someone who’d also undergone trauma]. Some way, karmically, the horrible things that were done to her as a child came back and destroyed her.”

In the following interview about this week’s episode, Herskovitz discusses trying to keep Britton around, shooting that devastating final scene and figuring out what the show will look like without its leading lady from now on. (Hint: Looks like a custody fight’s a’brewin’.)

TVLINE | We’ve heard Connie talk about why it was time for her to leave the show. How did you, co-showrunner Ed Zwick and the writers’ room come to the conclusion that Rayna had to die?
Basically, when Connie came to me and said that she really wanted to move on creatively — and this is very important because she loved the show, she loved the people on the show — this was a very hard decision for her… At that time she had a contract obligating her to do this year, and she was torn… And I said, “Look, if you want to move on, we’ll figure out a way for you to move on.” We sat together and talked about it. We spent a week thinking if was there any way that Rayna could leave the show without dying. And the answer was no, because there’s nothing in the world, I said, other than being taking hostage by the Taliban — she would be in contact with her children and her husband. She just would, that’s who she is. You can’t say, ‘Oh, she’s on tour,’ and never hear from her. She’d be in there on their phones every minute. So we realized that, if she was going to leave the show, there was no alternative to having her die and that was painful for all of us — believe me. But, we just realized that was the only way.

So then the question was, if you’re going to do something that overwhelming for the audience, what’s the best way to do it? What’s the most respectful way? What’s the most complete way in terms of allowing an audience to go through a process of the shock, the grief, the processing of it. You know, she’s been like a real character in many people’s lives for years and we knew how it important it was. So we wanted to do it right.

TVLINE | Did you try to change her mind at all?
Oh, I could tell there was no way to change her mind. [Laughs] We talked about it a lot. And by the way, I should say that I think that she would probably admit that she herself sort of wavered at various times. “Should I do it, should I not?” But, I could tell that this was really — from a very deep place as an artist that she felt she needed to do — and I respected that.

TVLINE | Connie said that last scene was very tough to get through. She kept crying when she was supposed to be comatose. Were you on set for that?
I was not on set, but I was in constant contact with everyone that day because it was such an emotional day. Literally on the phone like every 20 minutes. And also we have — modern technology is so remarkable — we found that I can use FaceTime in Los Angeles and see what’s going on in the monitor in Nashville in real time. It works incredibly well, and it’s so simple.

…I think the extraordinary thing to me was the girls. I remember [series creator and episode director] Callie [Khouri] saying to me, toward the end of that day, Maisy [Lennon], who’s the younger of the two sisters, turned to her and said, “How is it I still have tears? How is it I’m still crying?” because they were crying in every take. And Callie said to her, “Because you’re a real actress. You really feel these feelings.” And everyone was so emotional. You know, it’s actually—I was so knocked out by that, the whole episode, especially that last scene. That last shot of [Charles] Esten, when he puts his head down on her and the tear comes down out of his eye… I remember looking at that. I remember I said to the person next to me, “Can you get an Emmy for one shot?” [Laughs] That wasn’t acting, that was something more. That was some state of grace as an actor, in other words, that was a total commitment of his being in that moment. You were watching a man shattered. You can’t pretend that, you know what I mean? That was just an incredible moment. You know they were all just… everyone felt it so intensely. They just felt the loss so intensely. 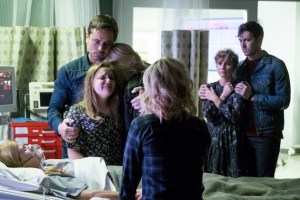 TVLINE | You guys have two episodes after this before the midseason finale. What shape will those take for Deacon and the girls?
I’m glad you brought that up, because I’m so proud of both of those episodes and I think that the next one after the death episode — the funeral and the aftermath of the funeral — is, in many ways, the most powerful hour of television I’ve been involved with in 20 years. I’m so proud of it, and I so want people to see it. Powerful as [Rayna’s death] is, to watch these people confront their grief is so extraordinary and so moving. I think it will really help the audience process their feelings about Rayna. I think both of the episodes will. But there’s something about the next one. It’s like a symphony; I can’t put it any other way. It’s just so musical and so lyrical and so full of love. And you just see into each person’s well of grief and love and feeling and connection. There’s a communality of it that is so profound, and I won’t go into the storyline because it’s a very, it’s actually — it feels like Dickens to me. It’s so profound. You know, I can give a hint that it has to do with what’s going to happen with the girls, but I won’t say any more.

TVLINE | Is there any time jump? Have you talked about any time jump? Often shows do that kind of thing after a major event like this.
When we come back, for the 12th episode, there will be a time jump equal to the amount we’re off the air: two-and-a-half to three months.

TVLINE | Deacon and Rayna didn’t actually record any of their duet album, did they?
Yes, they did. In fact, that’s going to play into upcoming stories. It’s not finished and that’s a big — that is, in fact, the dilemma that they face in the eleventh episode, the finale of this first part of the season. The fact that it’s not finished, and what are they going to do?

TVLINE | We saw Juliette walking toward the end of the episode. Maybe that means the worst is behind her? Is that accurate in terms of her recovery after the plane crash?
[Laughs] I’m not allowed to say anything.