Need to catch up? Check out the previous Quantico recap.

By the end of this week’s Quantico, the final one featuring two timelines, we know this much is true:

The mastermind behind the terrorist attack at the G20 summit was Lydia.

Alex and Ryan are very much in an “off” phase of their on-again, off-again romance.

Harry likely is never going to get the justice he’s chased all season.

Owen definitely is one of the good guys. (At least, for now.)

The damage Lydia did is going to take a new team of FBI and CIA agents to handle… and you might recognize a few of them.

However, I’m fuzzier on a few other things that take place during the hour. And maybe that final line of President Haas’ doesn’t mean what we think it does? Let’s review the highlights of “EPICSHELTER.”

ADIOS, OWEN | In the past, right outside the crazy person hovel that exploded at the end of the last episode, Owen tells Alex they’re not going to do anything except go home and pretend they weren’t there. But when some FBI agents come to talk to Owen about the explosion, we learn that the man going into the building was Jeremy Miller, the arrogant novelist/former CIA recruit who washed out of the program at the beginning of the season.

At the same time, Matthew Keyes — remember him? — arrives at The Farm for a lesson in how to “cover your a–,” aka get out of a situation if you’re exposed. They also have to write their wills to help them come to terms with the reality that they might die or something. It doesn’t really matter. All that really matters is that this sets the scene for Harry to have a spectacular emotional breakdown in front of everyone later. (We’ll get to that in a moment.)

Oh, and those FBI agents aren’t done with Owen: They found Lydia’s NSA tap and want to know what’s up. So in an act of love, Owen takes the fall for his shady, shady daughter. They have a nice moment together before he’s carted off to federal prison; “You’re a good person. You risk everything for your country, and I hope I can live up toy our example,” he tells her, making her cry as he pulls her into a hug. And when he’s cuffed and put in a van, Lydia turns to Alex and kicks her out of The Farm for good. Um, OK? I’m not clear why, other than she hates Alex, which may be a good enough reason.

HARRY MELTS DOWN | So, about Harry. He and Pip chat early in the episode, and through their conversation we learn that Harry hasn’t been able to find anything incriminating about Elliott’s father in those stolen NSA files. What he has found, though, is that Sir Lawrence has been smuggling refugees to safety… yep, he’s not quite the monster that Harry wants him to be. And taking him down, then, means denying all of those people safe haven, “all because of what he did to one man,” Harry says, crying a little. “This doesn’t feel like revenge anymore. This feels selfish.”

Harry then tries to get his handler, Charlotte, to pull him out of the program, but she refuses. So he goes to the bar, where everyone is working on their wills, and orders tons of shots while he outs himself as MI:6. Oh, and he reveals that he’s been reporting on all of them, too, for reasons he doesn’t go into much. During the evening, Sebastian makes it clear that he’s tattled on Harry to Matthew Keyes, and it doesn’t really matter, because Harry’s leaving the next morning, anyway.

Before he leaves, he has a moment with Sebastian in the shared house’s kitchen: He hugs Sebastian and forgives him, which leaves the conflicted man even more conflicted than before.

THE REAL TERRORIST IS… | In the present, Dayana and Will are still inside the perimeter of the terrorist event — as are the drives containing sensitive spy information from the G20 member nations — and Lydia needs a small tactical team to go in there and get ’em. “”I believe Dayana stayed behind to find those drives and took will to decrypt them,” Lydia says, helping Alex, Ryan, Sebastian, Harry, León and herself to put on bulletproof vests and FBI jackets. Outside, as a very Die Hard-looking snow starts to fall, Harry mutters, “”Oh, Lord. I hope this is the end and not the sequel.” (Heh.)

Alex eventually finds Dayana and Will… who reveals that Lydia sent them there to hide a few hours before. Then Lydia shoots Alex from behind — don’t worry, it hits her vest-covered shoulder (I think) — and by the time everyone catches up to her, Lydia has uploaded one of the drives onto the Internet. Will tries valiantly to stop the damage, but as Lydia says just before she and Alex go fist-to-fist, “It’s done.”

Meanwhile, at the FBI, Miranda lays it all out for Shelby. OK, try to stay with me (and please let me know if I’ve missed any of this):

Jeremy Miller contacted Miranda about a month after he faked his death in that explosion and told her that she wasn’t wrong about the AIC; he somehow got mixed up with the teachers at The Farm, who had formed a group to fight the AIC and started calling themselves the Citizens’ Liberation Front. The CLF wanted Miranda involved so she would keep the FBI out of the way “of what they needed to do to bring this group down.”

Wait, there’s more! The First Lady was part of the CLF and had contacted most of the members of the AIC to be at the summit, but Miranda swears she didn’t know that CLF was going to kill FLOTUS. She thought the CLF was just going to identify the AIC members and then disappear back into the crowd… or so she says. A little naïve for a seasoned law-enforcement, no?

But when the Islamic Front takes credit for the G20 attack — even though they take credit for everything, and they clearly weren’t behind this debacle — it gives the FBI and the CIA an out, and Shelby announces that both Miranda and Nimah are free because the whole thing is going to be swept under the FBI’s rug. 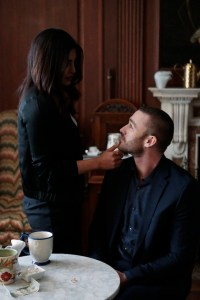 MOVING ON | So, what’s next? After giving Ryan back his ring and telling him that she’ll always love him — though making it clear that they are done, at least for the near future — she leaves to go to a meeting. It’s at the White House, and Shelby’s there when she arrives. Oh wait, guess what? Ryan, Nimah and Dayana are there, too! And when President Haas and Keyes walk in, they announce that all the assembled are part of a covert, hybrid CIA/FBI task force designed specifically to deal with the fallout from Lydia’s upload. Or, as Hass puts it, ” to find out who’s coming for us and to find this information before they use it against us.”

But wait, Alex asks, who’s in charge? “My son,” Madam President responds. Now, I know we all want Caleb back on our screens, but isn’t it possible that there’s another Haas sibling out there, making get another branch of government his wry and towheaded playground?