The tragic story masked by all of Harry’s pickpocketing and bedhopping comes out in this week’s Quantico, and boy, it’s a rough one.

In an unguarded moment with Sebastian, the MI-6 operative expands on the story in which his former partner, Elliot, killed himself. We learn that Elliott committed suicide in an act of extreme self-hatred, with a knife, while Harry watched. And all because he couldn’t bring himself to tell his powerful father that he was gay.

“He’d trapped himself in, no way out,” the normally jocular CIA recruit relates tearfully. “I tried to save him, but there was so much blood.” Harry advises his conflicted, highly religious roommate to come to terms with his attraction to men. “Just be true to yourself, Sebastian, whatever that is,” Harry implores him. It’s in no way a play for the other man: Doyle urges Sebastian to tell his new girlfriend, Carly, what’s up so that he won’t be crushed by the weight of having to live a lie. “That way, you won’t be in prison alone.”

Also of note: Russell Tovey is very good in the very sad scene. And now that I’ve brought this whole party down, let’s review what else happens in “FALLENORACLE”!

LOOK OVER THERE! | In the Farm timeline, misdirection is the lesson of the week. As we know, Harry excels at the type of slight-of-hand that parts oblivious passers-by and their wallets/phones/inhibitions. So he literally gives a class to the rest of his colleagues, then they all go to the Gold Leaf pub to try out their skills. (Side note: Why in God’s name would any normal person ever go to the Gold Leaf?! If there’s a class full of future spooks picking pockets there every few weeks, wouldn’t word get around quickly?)

It’s all practice, though, for the big op: breaking into an NSA building and erasing each recruit’s digital footprint. Of course, Alex and Ryan (among others) have extracurricular activities while they’re on site, too. Ryan, on Lydia’s orders, sets up a tap that will allow their covert group to monitor all emails, phone calls, etc. on the Eastern Seaboard. And when Alex realizes what her fiancé has done, she taps his tap. (There’s a “tap that” joke in there somewhere; feel free to make it in the comments.)

Harry spies on Ryan during the op for Alex, in exchange for her getting him as much as she can on communications related to Elliot’s father, Sir Lawrence Bishop. And Dayana sabotages León so he’ll get caught by NSA security; he turns in his get-out-of-jail-free card, which helps him avoid penalties but also gets him tossed out of The Farm. 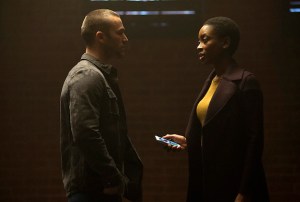 THE TRUTH ABOUT THAT VIDEO? | It’s all good, though, because he’s still working with the FBI… although it doesn’t seem like Nimah has let Shelby in on that arrangement. And when León breaks up with “Jane,” the blonde brokenheartedly confesses to her pal that she did the one thing G-men and –women aren’t supposed to: She fell for a mark.

Meanwhile, Lydia lets Ryan in on a little secret: The guy León killed — and in whose death Dayana and Ryan are involved — is really a CIA agent who’s very much alive: The subterfuge was a bit of misdirection designed to buy their allegiance. She then says that the tap Ryan pulled off at the NSA helped subvert a terror attack abroad, and the president of the United States signed off on it. “We serve America,” she promises. “it’s just better that America not know how.”

Though she offers no real backup to this, Ryan buys what Lydia’s selling and quickly calls Alex to tell her that Lydia is legit. All of this happens just as Owen and Alex find an odd basement office where tons of information is being shipped; the room has a wall full of surveillance photos of all of them, including Lydia, which leads Owen to believe she’s not involved in whatever this cabin o’crazy is. Also? There’s a gas leak, which blows the place to bits just after an unidentified man walks in. (Don’t worry, Alex and Owen are fine.)

Back at The Farm, León moves out and Sebastian tries to choke Harry to death, claiming, “I wasn’t like this before I met you.” Only Dayana’s presence stops Chen from turning his classmate into a rakishly charming, prodigiously eared angel.

ONCE MORE, WITH (HOPEFULLY LESS) BLEEDING | In the present storyline, Will loudly says that there are more insurgents left, and though he doesn’t know who they are, he’ll eventually figure it out. It’s a ploy to goad the incognito terrorists to show themselves — and they do. As Alex & Co. parade the group through the building, trying to suss out the bad guys before the hostage rescue team breaches the perimeter.

It appears that Will’s plan works when the lights go out. Someone takes Alex’s gun in the resulting chaos; when the lights come up, Carly — Sebastian’s wife — has a gun to Harry’s head. Turns out she’s a rogue CIA operative who only married him for cover (which, somehow, Harry knew?). Sebastian trains his weapon on his wife and demands that she drop her gun. Instead she shoots him; before he goes down, he shoots her, too.

The fact that Carly’s outburst was just a bit of misdirection becomes apparent when Alex and the gang realize they can’t find Will. They get everyone out, where Lydia (!), who’s running the rescue efforts (!!), says she had to hide the drives. Oh, and Dayana is the rogue agent still on the inside, and she has Will. Looks like it’s back into the ol’ terrorist tower for Alex!