Anyone else think the big event at the end of this week’s Quantico comes a little too easy?

I mean, sure: Alex had to intercept a major terrorist organization twice, crawl through heating ducts, have the stuffing knocked out of her and learn Swahili on the fly just to get to this point, so maybe “easy” isn’t the word I’m looking for here. But as the former Agent Parrish helps lead the mass of hostages — and some disguised terrorists — to safety in the hour’s final moments, I keep waiting for something to thwart her. An explosion? A sudden revelation of turncoatedness from a trusted associate? The earlier-than-expected arrival of that long-heralded military strike?

The fact that none of that comes to pass is deeply unsettling — though not as unsettling as the idea that Owen once more puts his gang of untested recruits in charge of a life-or-death operation (and this time, it’s his life or death we’re talking about). Read on for the highlights of “ZRTORCH.”

PINNED DOWN | In the past storyline, Owen is sad — both that Lydia may be a treasonous jerk who’s attempting to undermine the institution and country he loves and that Alex is so gung-ho about taking Lydia down. (Incidentally, while they’re talking, Alex finally reveals that the phone she’s been waving around is one of the ones she found hidden in Lydia and Owen’s house. Aha!)

“I lost my daughter because of my obsession. What will you lose because of your obsession?” Owen asks Alex, who does not listen one bit. Instead, after he leaves, she takes a photo of the map on the wall where Lydia has marked every place she’s ever had a mission. I’m no spy, but isn’t keeping such a map the OPPOSITE OF COVERT?

Alex shows the photo to Shelby, who tracks down some seemingly incriminating intel: There have been a lot of suspicious deaths at a lot of places Lydia has been in the past few years. Meanwhile, León meets with Nimah and agrees to a deal: He’ll get immunity for the murder he committed while working for the AIC… but only if he can get hard proof of the AIC’s wrongdoings.

GET OUT! | Back in the classroom, the lesson of the week is exfiltration, aka getting an asset out of a dangerous situation as quickly as possible. I very much enjoy the way the show plays out each student’s (really wrong) suggestions about how to get a CIA operative in Germany out of the country quickly, by having the situation unfold as though it’s happening, then Owen walks into the scene and it all goes to pot. (Side note: If you didn’t see the episode, that sentence likely made no sense to you. I apologize. If you did, wasn’t it a cool storytelling technique?)

While all of this is going on, Ryan, Dayana and the rest of the rogues in training get a text that they’re going to do some surveillance in Germany. And, what a coincidence: Owen announces that the class is going to Germany for a real-life exfiltration of a real-life person in trouble! Good God, why?! NONE OF THEM GOT THE EXERCISE RIGHT! 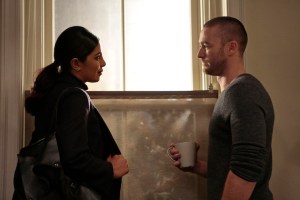 Once in Deutschland, Owen reveals that the asset they’ll have to remove is him: He’s a former CIA agent who entered the country under his own identity, so there are likely people coming for him right… now! He hides in a coffee shop, where Alex finds him right away. But some bad guys find them, as well. And after Alex and Owen are tazed, only Ryan’s loyalty to his lady — despite the AIC orders — keep Parrish and Hall alive and OK.

Back at his hotel room, Owen runs into the very upset son of an asset who died on Owen’s watch more than a decade ago. And despite Owen begging the young man to shoot him dead, Alex defuses the situation and saves her teacher’s life. When they’re back in the states, Owen listens to Alex’s plea to help stop Lydia, and he starts cooperating with the FBI’s investigation into his daughter.

WAFFLE WEDNESDAYS | Harry and Pip have waffles and talk about how Pip is helping the Brit with the investigation into Charlotte’s father. “He deserves to pay for what he did with Elliot,” Pip says, but acts really nervous when Harry asks him to get him some information about ship manifestos. Sebastian sees the pair and assumes they’re together; later, after too many beers in Germany, Sebastian confesses that he thinks Harry is the “temptation” set in his path, and all he has to do is be strong enough to resist him.

WEAK SAUCE | Dayana and León go on the AIC mission in Germany and wind up waiting to shoot a woman walking home from work. Dayana’s more than ready to do it, but at the last minute, León grabs the gun and prevents her from going through with the kill. She tells him he’s weak, then secretly calls Lydia and narcs on him. “He’ll be gone within the week,” Lydia promises.

FREE AT LAST! | In the present, some of the terrorists are injecting hostages with truth serum, asking them what countries they’ve visited in the past year, and then shooting them dead if their answers match up with a terrorist-finding algorithim Will designed. Ryan protests loudly, but Will is all, “MATH DOESN’T LIE!” But when it looks like León is going to get a bullet to the brain — because it appears that he’s covering for Dayana — Ryan steps in and fights the gun-wielding terrorist to stop his former classmate from getting killed. And when that fight goes south, Will runs out and kills the potential executioner.

They meet up with Alex, free Raina from the chair she’s still strapped to, then start to lead everyone out of the building. But there are more hostages than previously thought, which means the terrorists have changed back into regular clothes and are attempting to blend in. Screw it, Alex says, we’ll lead everyone out and sort it out later. (I mean, she says it in a much more lilting way, and with perfect hair, to boot. But you get the gist.)