Last week’s midseason premiere of The Walking Dead left us with questions — big ones.

Why did being held at gunpoint by a group of strangers make Rick smile? Who’s been spying on Alexandria? Why did Gabriel clean out the pantry? With whom did he drive off? Helpfully, Sunday’s excellent hour answered them all (and so will this recap). Shall we?

‘NO GUNS FOR BAD BOYS’ | As “New Best Friends” began, the Kingdom’s delivery to the Saviors went south when, in the wake of that prior dust-up, Jared decided that Richard should no longer be allowed to have a gun, and Ezekiel, as he tends to, said OK. Then, before Jared could engage in his favorite pastime and wail on Richard, Morgan intervened with his stick, and Benjamin — his skills improving — intervened to prevent the Savior’s retaliation. In the end, Gavin warned that, if this kept happening, “things might need to get a little visceral” — and Richard’s head would be first up if Negan wanted to give Lucille a bit of batting practice.

Returning to the Kingdom without the stick Eastman had given him — Lord, the Saviors are mean! — Morgan admitted to Daryl that yes, he’d been making the drop-off to the Saviors. “If Carol were here,” Daryl suggested, “she’d be leading us right to them, ready to kill them all.” Yep, Morgan replied. “And that’s why she left, man.” Off that conversation, Daryl happened upon Richard practicing archery (since the Saviors had figured out that he couldn’t be trusted with a gun). In no time, Ezekiel’s right-hand man had recruited Daryl to ambush some Saviors and leave a trail to someone for whom the king cares, so as to inspire him to go to war. Who? “Some loner he met,” Richard said. Of course, it took Daryl all of two seconds to deduce that that loner was Carol. Richard was fine with sacrificing her for the greater good; Daryl, not so much. In fact, if Carol so much as caught a cold, he swore he’d kill Richard! 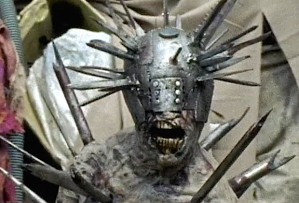 ‘WE OWN YOUR LIVES… WANNA BUY THEM BACK?’ | Next, things got weird in the most wonderful way. People started emerging from a junkyard and milling about in oddly organized fashion. Why? Turned out Rick and the gang we’d last seen at gunpoint were with them, and they were forming two circles around our heroes. “Are you a collective,” asked a woman whose name we’d eventually learn is Jadis, “or does one lead?” Upon establishing that Rick was the leader, Jadis allowed him to see that her group — its motto, “We take, we don’t bother” — had Gabriel as well as the supplies they’d forced him to swipe from Alexandria. That being the case, Rick noted that she knew they had nothing left with which to buy back their lives. He had a better idea, anyway — the trash people, who reminded me of a cross between the Borg, beatniks and Occupy Wall Street protesters — should join the fight against the Saviors.

After a looong pause, Jadis said no, and fisticuffs broke out. When the dust settled, Gabriel insisted that the trash people could have a s—load of stuff if they helped defeat the Saviors. Which he was sure was going to happen, because, he added, “Rick can do anything.” (Aww.) Intrigued, Jadis decided to let Rick prove his mettle by pushing him from a mound of garbage into a deathmatch with a walker covered in spikes. Natch, Rick survived, spearing his hand Jesus-style on a spike in the process, and at last, a deal was struck. Before we go on, two quick things: 1. That walker — sorry, Winslow — was spectacularly cool. And 2. a week ago, I would have said that the last thing TWD needed was more new characters. I even rolled my eyes when EP Scott Gimple said he thought people would like this group. Well, he was right, I was wrong. Pollyanna McIntosh’s Jadis isn’t just freaky, she’s freakin’ awesome. 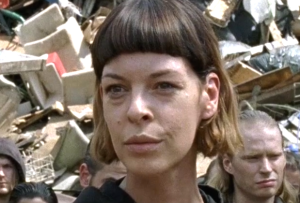 ‘EVERYONE’S ALL RIGHT’ | Before the trash people could join Alexandria’s fight against the Saviors, they needed guns — “a lot,” Jadis said. And Rick, his swagger back for the first time in eons, was, like, no problemo. While Rosita bristled at the notion of bringing supplies back to Alexandria rather than immediately going gun-scavenging, Gabriel confided in Rick how touched he was that Rick had known he wouldn’t just run off on his friends in Alexandria. One question still remained: Why had Rick smiled when all the trash people had pointed their guns at him? “Someone showed me enemies can become friends,” Rick replied, clapping a hand on Gabriel’s shoulder. (Aww again!)

Meanwhile, on the outskirts of the Kingdom, Carol caught Ezekiel and a few of his subjects clearing out walkers from her area. Turning on the charm, he insisted that he knew she just wanted to be left alone… but he also knew that walkers could be very inconsiderate toward those seeking privacy. No sooner had Carol settled back in with her book than there was a knock at the door — Daryl! After an emotional reunion, she explained that she’d left because she couldn’t lose anyone else — “I couldn’t lose you” — and, to protect her loved ones, she’d have kept killing and, in the process, lost herself. When she finally worked up the nerve to ask about the Saviors’ retaliation — glorious performance by Melissa McBride, BTW  — Daryl couldn’t bring himself to tell her about Glenn and Abraham. Instead, he lied that Alexandria had made a deal a la Ezekiel’s with the surviving Saviors, and everybody in Alexandria was OK. 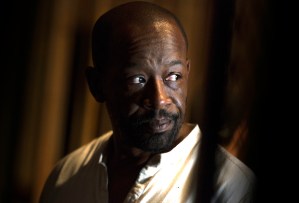 Later, back in the Kingdom, Morgan found Daryl keeping Shiva company and said that Ezekiel would be impressed that he was so good with the tiger. In turn, Daryl revealed that he’d found Carol. And, though he wasn’t mad that Morgan had honored her request, he stressed that, in the battle with Negan, “we need the Kingdom — you gotta make that happen.” Sorry, “it can’t be me,” insisted Morgan, adding that, since Daryl hadn’t told Carol what really happened in Alexandria — thereby dragging her into the fight — the two men were actually very much the same. (As if to underscore how gentle Daryl really is, Shiva, right on cue, nuzzled his hand.) At any rate, Daryl left the following morning for the Hilltop.

So, what did you think of “New Best Friends”? Did you get misty during Daryl and Carol’s reunion? Should he have told her the truth? Hit the comments.