If the first eight episodes of Season 7 of The Walking Dead were a little bleak for you, fear not — a change isn’t just gonna come, it’s already arrived, showrunner Scott Gimple tells TVLine. “The first half of the season was about these characters — and the audience — getting past a heartbreaking and horrific trauma. It was about them finding a way to go forward. By the end of Episode 8, we saw [Rick & Co.] hopeful and happy — yes, happy!

“And there is something in the back half [of the season] that’s kind of like joyful rebellion,” he adds. “They’re able to finally do something, stand up for the right thing. It’s like they had been asleep or just caught in stasis or anger or despondency. Some of them have been full-on trapped in a cell, listening to ‘Easy Street’ on repeat! That’s not happening for them right now.”

Which is not to say that it can’t or won’t happen for them again. Following Sunday’s midseason premiere (9/8c, AMC), in which Rick attempts to rally support for a revolt against Negan and the Saviors, “the rest of the season isn’t without terror and tears,” Gimple warns. “But there are moments where the characters smile — where Rick smiles! — which is an incredible thing! 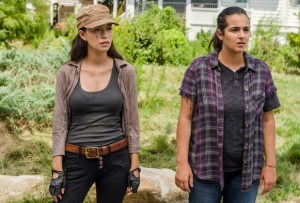 “I always knew that these characters and the audience would have to go through something hard,” he continues, “but they’re all heroes. Even the audience is heroes. They’re going through the journey, too, and I want them to be able to feel that energy about being able to do something finally, too.”

The question remains, is Rick, after all that he’s endured, really ready to take action. “Of course, he wants everyone around him to survive and thrive,” says the EP. “But there is an acceptance of doing what they have to do, of even suffering whatever they have to suffer, to not let things stand as they are. There’s a lot of energy to that and even joy, but also on the spectrum of that is an understanding that things could go bad.”

The fact that in the midseason finale someone was spying on Alexandria — and stalkers are so rarely a portent of good — certainly suggests that things will go bad again. At least “you won’t have to wait long for answers on that [individual’s identity] at all,” promises Gimple, taking care to refer to the scout as “they” rather than “he” or “she.” “You’ll get answers very, very quickly, and I think people will enjoy them. I hope they enjoy them.”

Huh. So maybe “they” are a harbinger of good after all. “That character and the world to which they belong,” Gimple concludes, “is a whole different flavor on the show.”

So, who do you think has been eyeing Alexandria? Are you looking forward to seeing our protagonists turn the tables on the Saviors? What do you think will reduce us to the tears Gimple mentioned? Hit the comments.