When The Walking Dead’s showrunner Scott Gimple told TVLine that viewers would dig the group being introduced in “New Best Friends,” I’ll admit I was skeptical. To me, the AMC drama already seemed overpopulated. But, after getting a load of Pollyanna McIntosh’s Jadis and her fantastically freaky junkyard collective, I’m eating my words. They. Are. Awesome. Even series lead Andrew Lincoln agrees. “One of my loveliest moments on set,” the Scottish actress says, “was when he turned around and went, ‘You guys are weird. I like you.'” 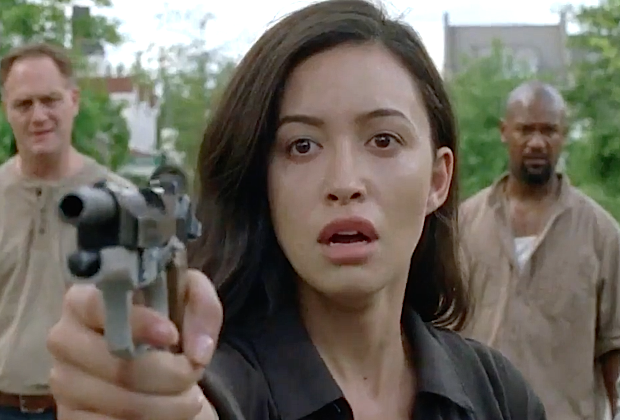 Endearingly, McIntosh — a veteran of SundanceTV’s Hap and Leonard and the fearsome star of the Offspring sequel The Woman — is just as enamored of her character as Lincoln and me. Before auditioning, she was told that the casting call for Jadis “was going out to both sexes, and that really thrilled me,” she exclaims. “I loved that open-mindedness and knowing that traditional femininity was not an issue here. And yet she was not to act particularly masculine, either. Whether a woman or a man, she was a leader, and that was that.”

Apparently, Jadis is a pretty inventive leader, too. When presented with her unique speech pattern, her portrayer “decided it was about her making the group more cohesive, so they have something in common that’s not just that they dress similarly and even wear their hair similarly,” she explains. “Also, it gives them a bit of mystery and is a power play. It kind of intimidates outsiders speaking that way. You get your point across, get what you need and keep this sort of division between ‘them’ and ‘us.’

“I’m going to have to start speaking like that now,” she adds with a laugh, “when I want to get things done!”

Though McIntosh — a self-professed “big puppy that talks too much” — acknowledges that she’s gotten into the “habit of playing characters who don’t say a lot but are pretty intimidating,” she won’t divulge how formidable a fighter Jadis will turn out to be. However, she does hint at a promising alliance between the collective and Alexandria. After Jadis concludes her negotiation with Rick, “you can see from the smile on her face that she’s pretty pleased with how things have gone down,” notes McIntosh. “But there’s also that lovely moment with the handshake and her not wanting to touch his bloody hand. She makes sure that he knows who’s still on top.”

What did you think of Jadis and her collective? Hit the comments.