Any other time, any other way that Grey’s Anatomy’s April could have been made interim chief of general surgery would have been fine. Fine and dandy, even. But, since it happened when she was in the middle of a revolt on Richard’s behalf against Eliza — and the temporary promotion came at the expense of coconspirator Meredith — it was neither fine nor dandy. In fact, it resulted in Kepner spending most of “It Only Gets Much Worse” wishing that it really was lonely at the top, because she was surrounded by colleagues who mostly were hopping mad at her. Did she even make it through her first day in her new position? Read on…

‘IT’S YOUR DEPARTMENT NOW’ | As the episode began, April showed up for work as nervous and ready as a sixth-grader on the first day of school. When she asked Bailey what Meredith would do, Miranda replied, in essence, not come to her with any of her questions. “You do you,” Bailey instructed Grey’s successor. Right off the bat, Eliza — launching Phase 2 of her training, which allowed a resident to be primary surgeon on their own case, start to finish — needed April to find an attending to supervise Ben during a partial colectomy. Unfortunately, that someone was going to be Richard, who was already fighting with Catherine over her decision to go to Bailey, not him, with the “problem” in Grey Sloan’s training program.

When April approached Webber and Arizona, you could feel the chill in the air all the way through the TV — and that was before she informed Richard that she was replacing him on his partial colectomy with Ben. And, while it was hard not to feel for Kepner, awkward as the situation was, it was just as hard and maybe harder not to be ticked on Richard’s behalf when she informed him that he could assist Warren, but “only when requested.” And no, she wouldn’t have Bailey back up her husband in the O.R. instead. April had assigned the task to Richard. “Well, I suggest you un-assign it,” he shot back so angrily that she pleaded with him until he agreed to follow the order. (And that look Arizona gave April… with. er. ing.) 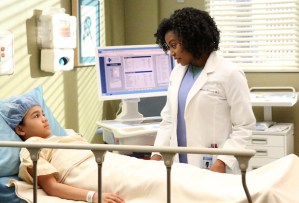 ‘WE’RE TROLLING’ | Since the patient with whom Stephanie was to enter Phase 2 died, Minnick suggested they go to the E.R. and find her a new case. (I miss Stephanie already, BTW.) In no time, the duo had stolen away Matty, a 9-year-old with gall stones, from Leah, whom Eliza assured would get her turn. Edwards so excited about Phase 2 that she wanted to hug Minnick (and did). Arizona? Considerably less excited. She hit the roof when she learned that Eliza intended to let Stephanie perform a lap chole on the kid! Worse, her concerns appeared to be founded when, mid-surgery, it was discovered that Matty had been bleeding out the whole time! Despite Arizona, Eliza and Stephanie’s best efforts, the patient flatlined. “What did I do?” Edwards asked afterward. “Did I kill that boy?” In response, Minnick just walked away. (Whaaa… ?!?)

Meanwhile, Jackson told Richard that it was time to take the Minnick matter to his mother. Unfortunately, “she’s not with us,” Webber had to inform his stepson. Ben wasn’t thrilled to have Richard on his surgery, either. However, he didn’t want Bailey to talk to Webber on his behalf. Warren was already having enough trouble being his wife’s “First Lady,” he noted. Or, as Murphy called him, “Mr. Bailey.” Making matters worse, Miranda decided to scrub in and watch Ben’s surgery along with Richard, further alienating her mentor. In the O.R., Webber suggested that, somewhere along the line, former student Miranda had “forgotten that he knows how to teach.” Eventually, Richard and Bailey became so distracted by their argument that they altogether stopped observing Ben, who was understandably pissed that they’d ruined his first solo flight.

‘YOU’RE SWITZERLAND’ | Nearby, an esophageal-cancer patient named Lynn (The Sopranos’ Aida Turturro) balked at the idea of April performing her surgery instead of her regular doc — Meredith. While Maggie seized on the opportunity to use Lynn’s loyalty to Mer to jab at April, Pierce also noted that they couldn’t wait for Grey to return. In the O.R., Lynn went into cardiac arrest and became so unstable that her tumor couldn’t be removed after all. Noting Maggie’s glare, April pointed out, “I didn’t give her a heart attack!” She couldn’t convince Lynn, though. She’d been sure she was in trouble from the minute “Dr. Not-Grey” showed up! In the hall afterward, Maggie lit into Kepner for being a traitor, to which April replied that she was doing her job. “Someone here,” she added, “has to act like an adult!” (She had a point there.)

During a lunch hour as fraught as the ones you remember from high school, “turncoat” April sat by herself in Grey Sloan’s cafeteria, while Arizona, Nathan, Maggie and Jackson suggested to Owen that he couldn’t remain neutral. Sure, Kepner was their pal, Robbins said — but their very misguided pal. “It’s like,” she suggested, “when you find out that your friend voted wrong.” (And as they made it clear to Owen, yes! You can vote wrong!) Checking on Lynn later, April was declaring herself much nicer than Mer when the patient’s staples gave way. Before going back into surgery, Kepner, having had it up to here with Maggie’s attitude, dismissed her from the case and allowed Jo to be her extra set of hands.

‘I’M SURPRISED BY YOU’ | Visiting Harriet in the nursery before Jackson took her home, April was taken aback when her ex noted that the new Mer was “really enjoying this, aren’t you?” Hell, yeah, she said. And it would have been wrong of her to ignore her responsibility to the hospital because of “a political pissing match.” Pointing out what everyone was saying about her and suggesting that Catherine had cleverly had Bailey pick Kepner to fill in for Mer — rather than her being up to the task — Jackson said it wasn’t too late for her to change her mind. But “I didn’t make a mistake,” she argued. Later, with Maggie glowering from the doorway, April informed Lynn that not only had she and Jo fixed her staples, they’d also managed to remove her tumor.

After Richard reported to Catherine that he’d been a failure as a teacher that day and accused her of turning his start-to-finish — Bailey — against him, Stephanie approached him to go over her disastrous surgery on Matty. “It’s not your fault, you lost,” he assured her. “Every good surgeon does.” At the same time, Arizona found Eliza crying and yelled at her for not teaching Edwards how to handle losing a patient. Thing was, “I never had a child die,” Minnick admitted. So she didn’t know how to tell Matty’s parents that they’d lost him. Robbins gently advised her and volunteered to go with her to talk to Matty’s folks. By the time they got there, however, Stephanie was already breaking the news — with Richard by her side.

‘HONEY, YOU ARE THE BOSS’ | As the hour drew to a close, Catherine advised April to take her paperwork home. But, since her roommate was a “narrow-minded, insulting piece of… ” Oh dear, Kepner remembered too late. She was talking to Jackson’s mother. After Catherine assured April that choosing her had been Bailey’s idea, Richard’s wife said that Jackson would never understand people like the two of them, because he was raised with money, connections, a name. “He’s never had to worry like us,” she added, at last dragging Kepner away.

At Casa Bailey/Warren, Ben confided in his wife that he was in a bad spot, because Minnick was great for the residents, yet his friends are the attendings. So whose side was he on? “I just wanna go to bed and turn my brain off,” he replied, “and stay out of it.” In Grey Sloan’s parking lot, Eliza broke down in her car — and broke her horn. Passing by, Arizona came to her rescue, pulling out her horn wires. When Minnick sincerely thanked Robbins, less for the horn than for being there for her after losing Matty, they embraced. It wasn’t a Mer/Nathan sitch, though. Arizona just noted that Eliza “could have friends here” if she wanted to. Finally, we cut — ominously? — to April out to dinner with Catherine.

So, what did you think of “It Only Gets Much Worse”? Was April in the right to take Meredith’s position? Did you expect Arizona and Eliza to hook up in the parking lot? Hit the comments.