Need to catch up? Check out the previous Grimm recap here.

The Wesen-o’-the-week in this week’s Grimm is a three-eyed, three-armed baby eater.

And he’s a good guy.

While watching the hour, you definitely get a sense that the NBC supernatural drama has loosened the reins in its sixth and final season — and that’s a great thing.

After last week’s joyfully slapstick hour, this week’s installment makes light of the fact that a creature known as “El Cuegle” snacks on infants (no, seriously) at the same time that the episode raises — and, in an uncharacteristic move for the series, doesn’t resolve — a moral quandary.

Is a “monster” who does bad things in service of the greater good really a monster at all? Once a person is on a certain track, can his or her fate be altered? And has Hank ever had this much fun with a Grimm villain during his entire time in Portland?

Read on for the highlights of “El Cuegle.”

IT’S A LITTER! | At the Spice Shop, Nick has changed back into his own clothes, but we’re pretty much where the previous episode left off: With everyone impressed by/terrified of the way little Diana mopped the floor with her mama’s main man. As Adalind gingerly explains to her daughter that they’re all going to live at Nick’s loft, because “it’s Kelly’s turn to be with his daddy now,” Diana gets distracted by staring at Rosalee’s belly. And when she announces that “there’s more than one” being in there — which is news to the parents-to-be.

Later, Rosalee expresses serious doubts about staying in Portland and close to Nick, who’s a great guy and all but “doesn’t exactly attract family types,” she points out to Monroe. Bree Turner and Silas Weir Mitchell are so good in this little exchange, as Rosalee notes how she never wanted a husband or kids before she met him, but now, she’s scared that her heart’s desires will be in perpetual danger if they stay in town. “I can’t be this vulnerable all the time,” she says, saying it’s like the cliché about waiting for the other shoe to drop. Then Monroe, bless him, launches into a very Monroe-esque history of the phrase, all as a set up for him to reassure her that “We have to be prepared for that other shoe, no matter where we are.” She looks sad but slightly comforted as she says, “I just want to live in a place without shoes, OK?” 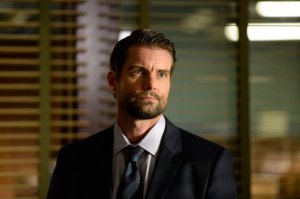 DEAD LIKE ME(ISNER) | After a night at the loft — in which Nick and Adalind talk about how much they missed each other (and Eve, skulking around in the tunnels, overhears) — Adalind returns her to Renard for joint custody funtimes. While they’re making dinner, Sean and his kid have a very cute yet very disturbing discussion about Bonaparte’s death, how she was involved and how she’s willing to hurt/kill Nick if he ever is mean to Adalind.

But Renard’s got other things on his mind: Namely Meisner, who admits to being dead but keeps popping up whenever Sean lets his guard down. Most notably, this happens at the precinct — and because of the large windows in the captain’s office, Nick, Hank and Wu get a front-row seat as Renard pulls a Clint Eastwood and argues with what looks to them like an empty chair. (Side note: Isn’t DeadMeisner a lot snarkier — and more talkative — than he ever was alive?)

STICK IT TO HER | Did I mention that Juliette tries to take the stick, but when she touches it, it burns her? And that Nick gets lightheaded at that exact moment, even though he’s miles away? And when Juliette later looks at her burn, it’s in the shape of one of the symbols she saw while dangling in the death-grip dimension or wherever she was?

THE GREATER GOOD | Last but not least, let’s deal with the baddie of the week. As I previously mentioned, Nick & Co. are on the hunt for El Cuegle, a Spanish Wesen who is legend for stealing babies and eating them. But as we see after the three-armed creature takes an infant named Auggie from his crib, the guy is very loving and careful with the kid, which doesn’t exactly track with his cannibal rep.

Still, as a half-Blutbadded-out Monroe puts it, “This is just wrong, and we have got to stop this baby-eatin’ bastard.” (Heh.) Nick, Hank and Wu eventually track El Cuegle to his apartment, where they find Auggie is totally OK. “Anything you say, or eat, will be used against you in a court of law,” Hank says, Mirandizing the kidnapper as he puts him in handcuffs.

But in an interrogation room at the precinct, El Cuegle sadly explains that he can see the future, and he only eats babies who will go on to do horrible things to mankind. Cherubic little Auggie, for example, is on track to kill both of his parents on his 19th birthday, thanks in part to his terrible parents and their disintegrating marriage. “If you could stop Ted Bundy,” he reasons, “wouldn’t you want to?”

SO MUCH FOR MY HAPPY ENDING | Nick eventually believes the guy, but it’s too late: El Cuegle escapes and returns to Auggie’s house, where — after the cops arrive — he falls down the stairs and dies before he can do anything to Auggie. But make no mistake: Auggie’s dad (played by All My Children alum Jeff Branson) is not a good guy, and as the episode ends, it’s entirely possible that the Portland P.D. will be back at the house in another 18.75 years.

And… that’s it. No twist where the dad is really an evil Wesen, who gets taken out by Nick at the 11th hour. No flashforward where we see that Auggie subverted his murderous future and turned out to be a good egg. Instead, we get uncertainty. Moral ambuiguity. An icky feeling all around. And then, the credits! I mean this sincerely: Well done, Grimm!