FROM THE DESK OF HIGHWAY 65 RECORDS’ BUCKY DAWES

Great to have you in Nashville this week, love your work, happy to see you directing Scarlett and Gunnar’s new video. One thing: Rayna and I were talking, and I just wanted to touch base about a couple of line items in this bill your people submitted to Highway 65 for The Exes music video.

While I’m sure that “man-bun specialist” and “smeared lipstick remover” are perfectly respectful jobs, some of these peoples’ rates are a bit higher than what we’re comfortable with. This “wind stylist,” for instance. Yes, I know she’s good. I know she’s Beyoncé’s preferred fan-holder (if that other guy is already booked). I know you waxed poetic for 15 minutes at craft services about how she elevated Scarlett’s performance to a “crazy new level” by aiming a fan at her face for hours at a time. I’m just saying, $250 an hour?

Speaking of Scarlett, she’s still rather unsettled by your pretty ridiculous — I mean, artistically constructive — comments about her clothes, looks, relationship and sexuality. She’s also not jazzed about crawling down a dinner table in a $4,000 dress that barely covered her… talents. What was going on there? And Gunnar’s not happy that you got him drunk and unearthed his relationship secrets, but I’ve been at a bar with that guy: Buy him a Bud Light and he’ll start spilling details after the second sip.

Anyway, we’d appreciate it if your people could review the charges and see whether there is any way to reduce them; those handcuffs that held Gunnar to the bed, for instance, can probably be returned for a full refund to the Luv Boutique or wherever you got them. If you need any assistance, you can get in touch with our numbers guy.

I’ve gotta go — there’s this whole other issue I’m handling with Rayna and some letters, and it’s becoming a thing.

Looking forward to your reply,

Read on as we recap the highlights of “Love Hurts.”

WELL, NOT ALL OF ME | We open mid-shoot for The Exes’ “All of Me” video, which is taking place in historic Riverwood Mansion. Scarlett comes out in a really gorgeous white dress that looks like a nightgown — but the director, Damien, wants a lower neckline. He also seems to want to know how Scarlett’s collarbones feel, given the way he’s suddenly got his hands on her.

Gunnar, in case you were wondering, is wearing a tuxedo, guyliner and all of the hair goop in Davidson County. Pretty soon, the pair is enveloped in Damien’s vision for the song, which seems like The Great Gatsby meets Mad Love. During taping, Scarlett crawls down a fully set dinner table like a housecat on Thanksgiving evening. Scarlett hurls glassware at Gunnar’s greased head. (Guys, I can’t get over Gunnar’s look for this video. It makes me giddy.) Eventually, Scarlett gets so mad, she “acts” slapping Gunnar in the face… by actually slapping Gunnar in the face.

After they wrap for the day, Gunnar agrees to go out for a drink with Damien, “as long as it’s cool with Scarlett?” he asks, shooting a look at her. Duuuude, you should know the answer to this one by now! She basically tells him to do whatever he wants (which of course means the exact opposite), and he takes off to drunkenly tell Damien all about their on-again, off-again romance. “She never thinks about herself,” Gunny says. “And that gives you license to be selfish?” Damien prods. “Sometimes,” Gunnar admits. 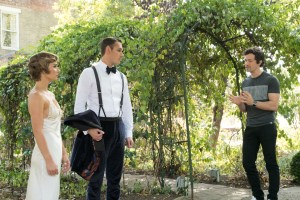 TRUST THE PROCESS? | The following day’s shoot goes even worse, starting when Scarlett flits around a ballroom dancing scene. Damien calls “Cut!,” and I desperately hope it’s because he’s going to lob a man-bun off one of the extras, but nope. She says she can’t move the way that he wants her to. He advises her, a little roughly, to own her sensual side. And while I do think Scarlett is being a little hide-under-the-piano about all of this, I love when she shoots back, “You’re not a shrink. You’re just some dude with screwed-up views about women all being secret sexpots and it’s your spiritual journey to awaken all of us.”

Things get uglier — when Scarlett refuses to shoot any more, Damien has his camera guy destroy the footage they’ve already got — and then she stomps off, with Gunnar in tow. “Maybe it’s OK to push the envelope,” Gunny says gently. “There’s no harm in cutting loose.” GUYS, GUNNAR AND I AGREE ON SOMETHING. I HAVE TO GO LAY DOWN. But he affirms that he’ll walk away from the shoot if she does… though I think Rayna might have something to $ay about that?

Scarlett eventually goes back to the shoot, after Damien promises “there’s a method to my madness.” Rayna and Zach show up to watch, but when Rayna notes that Scarlett isn’t having a good time, Zach dismisses her concerns and tells her to trust the process. Hmm, might this be a taste of their working relationship moving forward?

When Gunnar and Scarlett get to the video’s sex scene — which features Gunnar chained to a bed — Scar balks at the scene. Then Damien starts yelling at her about why she’s not famous and how she still folds Gunnar’s socks, even though he’s screwed around with half of Music City, and she gets super worked up — apparently, that was Damien’s plan the whole time. The cameras roll and Scarlett unleashes her newly found she-beast, which looks a lot like fogging up a mirror with her breath and doing perfume-ad poses. Whatever floats yer boat, honey.

The video shoot ends. Damien says Scarlett will thank him when she sees the finished product. At home, Scarlett says she doesn’t want Gunnar to tell randos about their romantic history, because she doesn’t want people to think she’s weak for taking him back.

CLAY’S SECRET | Maddie’s flirtation with Clay continues, and he seems like her back. He takes her to a little club where he’s called up on stage and performs a song called “Before You” that he essentially sings right to Maddie, and her face all but turns into the heart-eyes emoji. 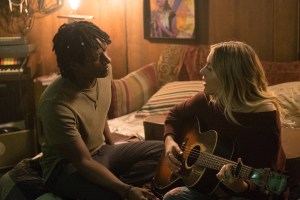 But every time she kisses him, he pulls away, citing the difference in their ages and in the colors of their skin. “People do it everyday,” she says, referring to interracial dating, and with the naivete only a white teen girl can bring to this particular party, she adds, “It’s not that hard.” He immediately calls her on that, saying, “You grew up in your big house, and you’re gonna tell me how the world works?”

Maddie seeks out Juliette’s advice, and she gets some wise counsel from the Queen of Bad Decisions herself: “Screwed-up men are sexy, don’t ask me why, until they’re not.” PREACH. Meanwhile, two jerks pick a fight with Clay, who’s performing on the street, and they beat the bejesus out of him. Maddie eventually goes to his place, where he collapses. She waits for him in the emergency room, only to have him be standoffish upon being released from the hospital.

Later, Maddie correctly surmises that her new guy is bipolar. Clay confirms, then adds that he doesn’t take his meds, because he can’t write music while he’s on them. She’s undaunted by this new information, God bless her and her passionate, stupid adolescent self. But Clay says there’s no future for them.

The next morning, no sooner has Maddie filled her parents in on her brief romance than there’s a visitor at the door: It’s Clay, in a sportscoat (aww), there to introduce himself to her parents and do things properly. Maddie is overjoyed, and Rayna and Deacon look impressed.

IS THIS THE GUY? | When Rayna realizes that her little box is missing from her desk, she and Bucky find it among Randall’s things. He immediately confesses, crying to Rayna that he only took the memento because he wanted his mom to think that he and Ray were pals. He’s very pathetic, but he’s not her stalker: When Bucky asks him to write some sentences on a pad, the handwriting doesn’t match the letters — now there are four or five of them — that Rayna’s received.

But the mystery seemingly ends in the episode’s final moments, when a loud and kinda unhinged-sounding guy shows up at Highway 65, brandishing more letters for Big Red and shouting that he was afraid she hadn’t gotten his other ones. Just before we cut to credits, a freaked-out Rayna yells for someone to call the cops.