First, Nashville‘s new showrunners brought Rayna and Deacon’s sexy back. Then they made Maddie palatable and maybe even a little likable again. In this week’s episode, they complete the hat trick by executing an admirable repair job on the beat-up ‘ship known as the Barnes-Barkley romance.

Yep, it looks like “Javery” is back in business, if the bow-chicka-wow-wow that starts at the end of “Leap of Faith” is any indication.

Elsewhere in the hour, Will’s shadiness eventually leads to his breakup with Kevin, and Rayna makes either an excellent or really terrible decision regarding Highway 65. Oh, and did I mention that Ray’s stalker is now creeping around her private property? Because that happens, too.

Read on for the highlights of this week’s episode.

TOO SOON? | We enter the hour during Juliette’s in-home physical therapy session, where she’s eager to do more advanced exercises with her slowly improving legs. Her impatience leads her to ask her therapist, Allyson, if she can use some fancy walking-assistance contraption at the clinic. Allyson gently points out that Juliette isn’t quite at the point where that device is useful and/or necessary, but you know how our girl gets when she fixes an idea in her head.

So Ju goes over Allyson’s head and calls the director of the clinic, who approves the use of the walking-assistance device in Juliette’s care plan. Meanwhile, Juliette decides to stop taking her pain medication — even though her medical team says that doing so will help her withstand the discomfort of therapy — and cancels her psych appointments.

To make things worse, once Juliette gets strapped into the special PT apparatus, she has a giant flashback/panic attack about the plane crash and nearly hyperventilates in terror. Allyson gets her out and talks her down, vaguely referring to a traumatic event in her own past, but Juliette is still determined to supercharge her recovery.

The good news: She’s progressed so far that she can pick her foot up off the ground. The bad news: It hurts her a lot, and when she later falls in the bathroom and then angrily rebuffs Avery’s attempts to help her, that hurts him a lot. He realizes that she hasn’t been taking her pills; her explanation that she doesn’t want to chance getting addicted again makes sense, but he’s too angry to give her an inch. He calls her a pain in the tush, adding, “It has nothing to do with you being hurt, because you’ve been like this since the day I met you!”

DIVINE INTERVENTION | Ju winds up at Hallie’s church, asking the pastor how she should pray. He tells her it’s simply a conversation, and when he leaves her alone in the sanctuary, she looks skyward and wonders why she survived the crash when no one else did. “I’m lost,” she says, starting to cry. “Help me, please?”

When Avery comes home later that night, they both apologize for the argument earlier. “I don’t want to need you, but I do. I always have,” she says, and it’s not long before she’s pulling him over her on the couch and reaching for his belt buckle. But at the last minute, he pulls back. “You need time,” she surmises. “Yeah,” he says, looking out of sorts.

But it’s really not long before Avery approaches her again, picks her up and deposits her on the bed, where he starts climbing her body like it’s Everest — y’know, breathless and marveling at being in the presence of such majesty? So, Avery, just to be clear: That “time” you needed was the amount of time it takes to poach an egg? Cool. Cool. 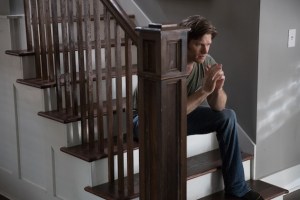 BUT DON’T PENGUINS MATE FOR LIFE? | Kevin is super into a gorgeous apartment, but Will drags his heels about going to see it… or doing anything, really, that will hasten his and Kevin’s cohabitation. When Will finally checks out the flat, the realtor hits on him, and young Lexington is so freaked out — not by the overture, but by the temptation he experiences — that he lies to his boyfriend about turning in the application for the property.

And when Kevin realizes what’s happened, it’s the very sad beginning of the very sad end for the two. There are lots of tears. Kevin dumps Will’s stuff on the front porch. Will cries backstage before his gig. And when he takes the stage, he stops the band from playing the rockin’ opening number so he can instead sing a beautiful, quiet, mournful ballad he wrote with “my first love.” Aw, penguin!

NEW DEAL, NEW THREAT? | At Highway 65, Rayna and Bucky are mid-lament that they can’t afford a kickass director for The Exes’ next video when Rayna stops her digital marketing dude Randall to tell him how much she likes some work he’s done on Scarlett and Gunnar’s site. Randall almost pees himself in pleasure and scurries away. Bucky calls the guy “eager to please.” Bucky is maybe not the best judge of character and/or sanity?

Anyway, tech zillionaire and Rayna superfan Zach comes to town, and Rayna and Deacon bring him to The Bluebird to hear The Exes play. He has a blast; the next day, he pitches Rayna a deal. He wants to invest in Highway 65 but allow her to retain complete control. It sounds too good to be true, but Ray’s lawyer says there aren’t any dangerous loopholes: “There’s no such thing as free money,” the attorney advises, “but this is about as close as it gets.”

And as suspicious as I am of Zach’s offer, I welcome it with open arms and a song in my heart if it gives us scenes like the glorious everyday exchange Rayna and Deacon have as they’re getting ready for bed. She’s wearing a Sun Records T-shirt and slathering lotion on her legs. He’s hanging up his pants and padding around in bare feet and boxer shorts. They’re talking about the pros and cons of going into business with the app entrepreneur, and they are so comfortably normal and drama-free in the scene that I want to kiss both of their beautiful faces.

Long story short: Rayna agrees to Zach’s offer. And even before that, he hooks her up with a feature film director to handle The Exes’ vid. Yay, right? But then Rayna gets a manila envelope full of rose petals and crazy, and she, Deacon and Bucky realize that some trespassing, obsessed fan must’ve hand-delivered it to the house. “Been a while since we got one of these,” Bucky says when he sees it. “Remember that woman who sent you her socks?” (Heh. No, but seriously, WHO IS DOING THIS?)