This week’s Nashville achieves a feat I once thought was unattainable. I hesitate to put this all down in writing, for fear that I’ll have to eat my words next week, but here goes: For a few minutes at the end of this week’s episode, I did not loathe Maddie.

Yes, I’m aware that Marshall Herskovitz promised that he and fellow showrunner Ed Zwick had a “course correction” in the works, one that would make Deacon and Rayna’s daughter more palatable to an audience grown tired of her teenage temper tantrums and bratty outbursts. But with so many eye-rolls and so much Daphne-bashing — not to mention that whole emancipated minor ridiculousness — under Mads’ belt, it seemed like Lennon Stella was never again going to get to play the budding songstress the way we’d come to know her: complicated and somewhat trying in the way that teenage girls are, yes, but generally a good kid.

This week’s episode offers quite a bit of hope, in the form of Maddie cranking out a few big apologies (including one that’s very overdue), flirting with a new boy and starting an age-appropriate job in the field she loves.

Meanwhile, Juliette oversteps, a YouTube sensation blows into town and a creepy character gets creepier (yet I’m still not convinced he’s The Stalker). Read on for the highlights of “Let’s Put It Back Together Again.”

MADDIE’S FIRST DAY | Avery walks in on Juliette listening to demos, which seems promising, but her heart’s not in it. “To sell this song,” she says of the upbeat number playing on the computer in front of her, “you’d have to do it in a miniskirt and six-inch stilettos.” But Avery is undeterred. “I think you’re amazing,” he says, getting ready to leave for the recording studio where the aforementioned social media star Ashley Willerman is laying down tracks for her first album. Deacon will be there, as will Maddie, who’s starting an internship at the studio. “Really? Deacon and Rayna think they can slow her roll?” Ju says knowingly. (Heh.)

At the studio, Maddie’s getting briefed on receptionist’s desk protocol when Ashley and her entourage roll in; Maddie recognizes her as the person “who makes all of those stupid YouTube videos,” and she is unimpressed. During a coffee run for Ashley and her crew, Maddie notices a young guy playing guitar at an outside market; she’s so distracted by him that she drops one of her cups, and he quickly stops performing to come to her aid. 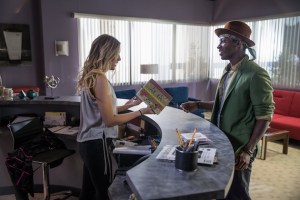 They chat a little and she tells him her name, which proves helpful when she leaves her lyrics journal behind at the coffee shop and he brings it to her at work. Later, we learn that he was raised by his grandparents, his mom was in and out of drug-treatment facilities until she died, and he really digs Maddie. Even at this early stage, the two of them are kinda cute.

BARKLEY, OUT! | Things inside the recording booth are… less cute. Avery’s soul is dying a little more with every note Ashley sings, thanks to the weird, Britney Spears-ish vocal affect she insists on using. “What’s that thing she’s doin’ with her voice?” asks Deacon, who still manages to give the entire situation the side-eye even though he’s sporting his Sexy Dad reading glasses. “It sounds like she’s choking.”

Avery confronts his artist about her silly singing style. “Oh, that’s called emotion,” she shoots back, making it clear that his opinion is not desired. They got back and forth a bit more, Ashley demands a vegan meal, and then Avery gives it another disastrous shot while Maddie’s out getting lunch. “You’re scared that people won’t like your voice or you as you are,” he (probably correctly) surmises, telling Ashley that a stripped-down sound would better show off her legitimate talent. “I’m an influencer. Are you an influencer?” she spits back. Oh good GOD. Is it any wonder that Avery quits before much headway is made on the album?

ANGELS AMONG US? | Meanwhile, Juliette finally meets Hallie, her “angel” from the night of the crash. Hallie is very sweet and seems very comfortable around Juliette; they make loose plans to see each other again before Hallie jumps into her busted-up old car and has to go. That gives Ju an idea: She buys her new friend a new car and has it waiting for her at church… but Hallie is extremely “uncomfortable” with the gift and says she can’t accept it. “I have a bunch of foster kids waiting on me,” Hallie adds, by way of explanation of why she has to go, and I’m starting to wonder if Hallie is an ACTUAL angel. How good can one person be? Plus, Herskovitz and Zwick have done it before!

At home, Juliette feels stupid for being so presumptuous, and that soon spirals into her sobbing to Avery, “I should have died in that plane crash. We both know that. You’d be better off. I’d be better off. It’s the truth.” They’re still arguing when she goes into the nursery to change Cadence, who pees on Ju’s lap — and she feels it! Soon Avery and Ju are crying happy tears while Cadence thinks, “If this makes them that happy, wait ’til they see what I do after Baby Burrito Night.”

Later, Juliette finds her way back to Hallie’s to report on the new sensations in her legs. But soon she’s crying again because she’s afraid. “That it’ll go away again?” Hallie wonders. “That it should,” Juliette sniffles.

Buoyed by Hallie’s certainty that she survived because her life has greater purpose, and considering Avery’s declaration that he wants to know what they are to each other, Juliette pulls up to a keyboard and writes and sings a new song that’s very lovely, indeed. Baby steps?

MAKING AMENDS | Speaking of babies, Maddie and Ashley get into it on Day 2 when Ashley vehemently rejects the coffee Mads fetches. The verbal altercation ends soon after young Miss Claybourne calls the visiting artist “a total bitch” — to Deacon’s absolute horror — and then gets herself fired. “She’s a damn intern. She can’t be doing that,” Deke reports to Rayna via phone call, but admits he’s scared to confront her about her behavior after all the garbage she said on the witness stand during her emancipated minor hearing.

So he does, and it doesn’t go great. Then Rayna strongly suggests that Mads make things right with her dad, because it’s been too long that she’s gone without saying she’s sorry for taking a wrecking ball to his heart. So Maddie creeps into Daphne’s room and asks her sister, “Can I ask you something? Am I turning into a bitch?” While I am guffawing at Mads’ delayed self-awareness, Daphne takes the high road and answers, “A little.”

Maddie finally finds Deacon in the home studio and does what she should have done a season ago: apologize. “So, at the trial, I never believed those things I said, but I said them anyway, because I really felt trapped and I felt like that was my only way out,” she explains. He’s very gracious, calling himself a “hothead” and saying, “I should’ve been a better dad.” She’s very broken up about the whole thing as she says, “You’re my dad, and I wouldn’t trade that for anything.” He hugs her. They’re both a little emotionally bruised. And Stella and Charles Esten are really good in this scene.

Maddie goes back to the studio the next day, apologizes to Ashley, and a fist-bump makes everything copacetic.

CREEPSTERS | Quick, let’s play: Who’s Rayna’s Stalker? Is it the guy who gets uncomfortably close to Rayna while taking a photo outside of Highway 65? Is it Randall, the digital marketing guy who brings Rayna juice during a meeting and later steals one of her personal effects from her office? Is it someone else altogether? Make sure to log your most up-to-date suspicions in the comments.

Now it’s your turn. What did you think of the episode? Sound off below!