The folks of Nashville are one sorry bunch as the second half of the two-hour Season 5 premiere gets underway. Rayna is sorry Deacon doesn’t see things her way. Deacon is sorry that he can’t just do things Rayna’s way one more time. Scarlett is sorry she can’t seem to get out of her own way when it comes to loving Gunnar. Gunnar, in true Gunnar fashion, is sorry — but he’s not quite sure why. And it looks like Kevin soon will be real sorry he ever encouraged Will to attend a handsome designer’s trunk show.

But does any member of this apologetic enclave get satisfaction by the end of the episode? Read on for a rundown of “Back in Baby’s Arms.”

AUTUMN’S BACK (KINDA)| Let’s deal with the hour’s silliest — by her own admission! — fight first: Scarlett’s beef with Gunnar. When we open on them in bed, she’s irked that Autumn Chase won’t stop texting Gunnar, but he points out that Scarlett asked him not to engage with the brazen country singer anymore, so he hasn’t responded to any of her (many) overtures. When that answer makes too much sense, meaning Scarlett can’t harp on it anymore, she starts grousing about how she’s not even sure if they’re a “thing” or what. Gunnar patiently confirms “We are a thing” and ushers her back under the covers, but no amount of spooning is going to wipe that disgruntled look off Scar’s pixie face.

WELCOME HOME | Meanwhile, Rayna returns home earlier than expected, to Deacon’s delight. The house is empty and Deke is sporting a black v-neck, so is it any wonder that they’re sliding between the sheets even before the wheels on Rayna’s rolling suitcase stop spinning? And Ray has news for her self-professed “one-man welcoming committee.” While she was driving home, she had an epiphany about her career: She wants to record a concept album about their relationship, which she’ll write and record with Deke. “I want us to write our story, together. Will you do that with me?” she asks, voice all smoky and soft, but Deacon is clearly uncomfortable with the idea. The notion is tabled when she starts snacking on his neck like it’s a pack of in-flight peanuts, but her powers of persuasion come up short when she falls asleep with her nose buried in his stubble. (But Connie Britton’s laugh when Rayna realizes she’s dozed is pretty great.)

‘BUNNIES AND DAISIES AND CRAP’ | The next morning at Highway 65, Rayna holds a meeting with Bucky, Scarlett and Gunnar to talk about next steps for The Exes. Ms. Jaymes goes on and on about the “clarity” she found during her drive the same way that people who are on a cleanse just can’t stop talking about how GOOD they feel and how you HAVE to try it and how drinking cayenne and maple syrup is IN NO WAY a form of TORTURE in some parts of the world. We get it, Ray: You’re enlightened. Anyway, she’s all fired up about releasing another Exes single, and she suggests a tune called “All of Me.” Right away, Scarlett looks uneasy, but claims she’s on board.

Guess what? She’s not. Her big problem with the song is that Gunnar wrote the words, and there’s a passage that goes, “Just one look and I can barely breathe/ I feel your golden eyes burning right through me.” Scarlett has blue eyes. And even though she admits to Deacon that she’s “bein’ weird” and sabotaging her relationship, she can’t get past the fact that Gunny’s love song isn’t about her.

But she puts her own problems aside for a moment to hear his concerns about Rayna’s proposed concept album… and then to dismiss them in very entertaining fashion. When Deke says he doesn’t want to mine his and Rayna’s tortured love life for song fodder, Scarlett shoots back, “What the hell else are you gonna write about? Bunnies and daisies and crap? Beer?” (Side note: That last part is an in-joke about Esten’s song, “I Love You Beer,” and it’s funny.)

SOUR NOTES | But the laughs stop when Scarlett picks a fight with Gunnar, whose insistence that “All of Me” isn’t really about anyone does nothing to assuage her anger. Later, she theorizes that Gunnar’s been mad at her ever since she said no to his marriage proposal. “I just wanted to let you know that singin’ that song makes me want to slap the living hell outta you!” she says, leaving things on a bad note with her boyfriend. And when she and Deacon process the situation later, Uncle Deke suggests that maybe she should just apologize and hope for the best.

So Scarlett shows up for a radio spot, says she’s sorry and sings “All of Me” with Gunnar, who changes the lyrics to “blue eyes” during the performance. Everyone wins! 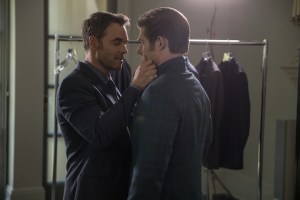 WELL, HIS LAST NAME IS FINE… | Let’s take a brief break to deal with the Incredibly About-to-End-Soon Story of Two Boys in Love. During Will’s birthday dinner, he and Kevin are approached by Jakob Fine, a big-deal menswear designer who really wants to baste Will’s hem, if you catch my drift.

Before you know it, Will is at one of Fine’s trunk shows, where the slick designer wastes no time in going in for a kiss. And the thing is, Will totally wants to do it; only some last-minute guilt stops him from the smooch. Jakob reluctantly backs off but reminds Will that “the offer is open, so if anything changes, call me.”

After hashing it all out with Gunnar — who does my job for me by pointing out that NO ONE should be taking relationship advice from him — Will decides to stuff his budding Jakob lust and double down by suggesting that he and Kevin buy a house together. I’m sure everything will be just great.

ROUGH RECOVERY | Over at Casa Barnes (and sometimes Barkley), Juliette is still doing that “You’re going to leave eventually” thing to Avery, who vows that he won’t. She also says she wants to find the woman who helped her in the field after the plane crash. So she and Emily go to the church, where the pastor tells her that her “angel” is a very private woman named Hallie, and he’ll pass Ju’s number to her. He also assures Juliette that “God has a great plan for you… just ask him.” I expect Juliette to brush him off, but it feels like his words land, and I’m hopeful.

A MEETING OF THE MINDS | Meanwhile, Deacon shows up at Highway 65 with the news that he’s going to play on a record Avery is producing for a YouTube sensation named Ashley; Rayna is less than pleased that he’s committed to the “Ashley Whatsernuggets” (hee!) album before giving her an answer about theirs. Later, they have a heated discussion about how he’s just a player in The Rayna Jaymes Show… which is kinda true, no? “I live in your beautiful house with your beautiful girls. It’s your label. It’s your world, baby. I’m just living in it. You make all the decisions. It’s not always easy, you know?” Deacon tells her, but she refuses to get into old arguments with him.

But after some time has passed, she apologizes for trying to force him into the cover album. She reflects on their life together, adding, “What a long, strange trip it’s been.” If that is a subtle clue that this concept album is going to turn into a Rayna-Deacon Grateful Dead cover album, SHUT UP AND TAKE MY MONEY. She admits that she hadn’t thought about how digging into past pain might not be the most fun for someone who’s just come off a year of losing his sister and punching his business partner and getting parentally divorced by his ungrateful teenager. But when she’s done saying sorry, Deacon picks up a guitar and plays her an in-progress love song: He’s already started writing for their new album. Rayna is nearly in tears as she says that she loves him. And before she leaves, she offhandedly thanks him for sending her flowers with a card that said, “To the only woman I have ever loved.”

The thing is: Deacon didn’t send them. And as Rayna goes to Highway 65, we see someone watching her and listening to her song “Already Gone” — all stalker-like — from a car with a busted windshield across the street. Is it her too-enthusiastic new digital marketing manager? Is it the über-rich Zach Wells, whose high-pitched laugh is just super creepy when he calls to say he’s coming to town? Or is there an altogether different danger lurking in Rayna’s near future?

Now it’s your turn. Grade the second half of Nashville‘s season premiere via the poll below, then hit the comments to back up your choice!