A spruced-up and pared-down Nashville gets underway this week, with the Season 5 premiere marking both the drama’s move to CMT network and its slowed-down approach to storytelling, courtesy of new showrunners Ed Zwick and Marshall Herskovitz.

The hour — which is the first half of a two-part season opener; Part 2 will air Jan. 5 — finds both of the series’ leading ladies in rough places. Juliette survives her plane crash (no shocker there) but becomes convinced that the injuries she sustains are some kind of karmic payout for past bitchery. And Rayna is just, for lack of a better word, shook: by business troubles, by Juliette’s situation, by an inability to connect with the music that got her where she is in the first place.

And in the absence of drunken car accident! fist fight! whiny teenage rebellion! crazy-eyed mistress! accidental death! pill addiction! alcoholic relapse!, the show has the time and room to go deep on both of these soul-searching trajectories. For the most part, and particularly in the Rayna-Deacon relationship, I think it works pretty well. Although I’m not 100 percent on board with Rayna’s sudden existential crisis, I’m very pleased with what it shows us about Mr. and Mrs. Claybourne, at least in this episode: They love and support each other consistently, not just in the lulls between big, soapy cliffhangers.

Read on for the highlights of “The Wayfaring Stranger.”

ON THE ROAD AGAIN | We open with Rayna, looking like Downhome Barbie in a muscle tank and baseball cap, pulling into a rural gas station in a convertible. While a starstruck kid pumps her gas, Rayna notices an old, blind man singing “The Wayfaring Stranger” over near the garage. She approaches him, a weird look on her face; when he asks her to sing, she tells him she’d rather hear him continue. It’s all a bit surreal, and before we can figure out exactly what’s up, a title card takes us back to three weeks earlier.

MAYDAY | All of a sudden, we’re plopped in the midst of the wreckage of Juliette’s plane. A woman who happened to be nearby runs through the scene, calling for help; when she sees Juliette is still alive, though badly hurt and fading fast, she sings to her to keep her awake. And because this is Nashville, the woman has heavenly pipes. (If it were me singing to Juliette, she’d probably go gladly into that good night.)

News of the accident travels quickly. We see Avery wake up Gunnar and Scarlett (oh hello there!) and Will; over at Casa Jaymes-Claybourne, a tearful Maddie and Daphne climb into their parents’ bed and turn on the news. The next thing we know, we’re back to three weeks later — though not quite at the point where we started the hour. Juliette’s spinal cord is intact, but two vertebrae were shattered, and she can only move one of her toes. “It could be months before you feel anything,” her no-nonsense doctor reassures her. “Or never,” Juliette replies, dour. “Think good thoughts. It helps,” the doc shoots back. And while I appreciate (and agree with) the woman’s chipper practicality, I understand where Ju’s mind is at: Is that the kind of thing you’d want to hear if you couldn’t get past the first line of “This Little Piggy”?

Juliette is pretty checked out of life, but there’s a bright spot: When she talks to Cadence, she’s fully engaged and much lighter and happier. Rayna comes for a visit, which we learn is a semi-regular thing. Under Red’s gentle questioning, Juliette starts crying and admits that she feels under pressure to get better because so many people’s livelihoods depend on her. “I caused this,” she says. “I messed everything up in my life, and this is the result.” Rayna looks pained as Juliette goes on to explain that she was saved by an angel. “If you were doomed, why would an angel come and save your life?” Ray asks. 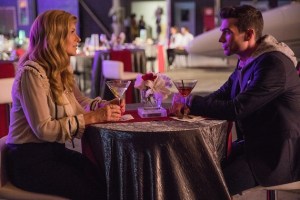 RAYNA’S BIGGEST FAN? | Over at Highway 65, Bucky’s got some bad news: They had to pay $275,000 to free Maddie from her Lennox Hill contract, and because Gunnar and Scarlett were kicked off Autumn’s tour, the revenue stream from The Exes’ new album is basically dry. “Are we in trouble?” Rayna asks him, showing far more concern about finances than when, oh, Juliette broke her contract or when Markus was a total soul-patched d-bag or when Scarlett hid under a piano or when Layla threw a zillion hissy fits or any number of other H65 “bumps in the road,” as Bucky calls their current troubles.

To bring in a little cash, Rayna agrees to play a private charity event for a self-confessed “insane, out of control fanboy,” a Silicon Valley rich guy named Zach Welles. The three most important things to know about Zach: 1) He developed an app called Boogaroo, and it made him a lot of money. 2) He wears a hooded sweatshirt underneath his sportscoat. 3) He is odd in the way that might just be fun and eccentric but probably will end with him stealing Rayna’s fingernail clippings out of her garbage.

Anyway, she plays a concert at his party and is basically reduced to being background music; I give her credit that she gamely just keeps going through the set and doesn’t say anything to the crowd; can you imagine someone like Faith Hill or Reba or Trisha Yearwood being cool with people talking incessantly throughout their shows?

Afterward, Zach apologizes and, over drinks, wonders why Rayna hasn’t recorded anything lately. He pushes past her “I’m busy” excuse until she gives him an honest answer. “I’m not recording anymore because I don’t have anything to say,” she says, sadly. “I’ve worked so hard to keep my label afloat, I forget who I am as an artist.” When he asks, she tells him “The Wayfaring Stranger” by Bill Monroe was the first song that ever really got through to her; he suggests that she needs to figure out what else will make her feel that way, and chase it.

IN WHICH NOT EVEN DEACON-LOVIN’ DOES THE TRICK | A deeply unsettled Rayna calls her husband and confesses that, after an anxiety attack rattled her on the plane out to California, she can’t fly home. He talks her down a little and says they’ll touch base in the morning… and then surprises her by showing up at her hotel room. Aw, guys! “Why are you here, crazy person?” she says, smiling. “‘Cause my girl’s in trouble,” he says simply, and that sound you just heard? It’s Rayna’s pajama bottoms hitting the ground.

She drags him to bed, but their fun is short-lived: Afterward, Rayna makes it clear that she’s not going to fly home, because she needs the time and headspace involved in driving back to Tennessee by herself. “I’m lost,” she confesses. And though Deacon’s a little confused, he doesn’t punch a wall or sulk or do any of the other inexplicable things he’s done in the past. He merely hears what she says and supports her decision. Y’all, it’s hot.

And that brings us to Rayna and the old guy at the gas station. He plays. She listens. He suggests that she let herself sing, because she “might find the joy you’re lookin’ for.” Rayna looks at him like HOW HAVE YOU SEEN INTO MY SOUL YOU SIGHTLESS SOOTHSAYER? But she sits. Has she reestablished that connection she seeks? Unclear. (But remember, the finale continues in a few weeks.)

ANGELS WE HAVE HEARD ON THE SIDE OF THE ROAD | Meanwhile, back at her house, Juliette can’t accept that Avery is still in it for the long haul. When he professes his love, she responds, “We’ll see how you feel in a few weeks.” But after a nightmare about the crash late one night, she demands that he drive her to the site where the plane landed so she can see everything with her own eyes. Of course, all the wreckage has been cleared, and it’s back to being just a field. “I thought I was gonna die. Why didn’t I die?” she sobs as he holds her. Poor thing.

After a little nap in the car, Avery and Juliette stop for smoothies on the way home. They happen to be across the road from a church, and a voice inside draws Juliette out of her funk and over to the house of worship. At the door, Ju realizes that the woman singing a solo is her “angel” from the night of the crash, and her eyes fill with tears.

BACK AT HOME… | Maddie is still pretty terrible (though I hold out hope), snapping at Daphne when the younger girl tries to help her finish writing a song that’s giving her trouble. Scarlett takes the teen aside for a little real talk: When someone helps you out of a creative bind, “we call it collaboration,” she says. So Mads sucks it up, apologizes and sings the (very pretty) new tune with her sis in the living room while Gunnar and Scarlett look on.

Now it’s your turn. What did you think of the premiere’s first hour? Grade the episode via the poll below, then hit the comments to flesh out your thoughts!