Picking up the evening after the events of its winter finale, Grey’s Anatomy did not pass “Go,” did not collect $200 — it went directly to jail for its midseason premiere. But Alex’s decision to take a plea deal and do time in order to protect Jo’s identity wasn’t the focus of “You Can Look (But You’d Better Not Touch).” On the contrary, the episode followed Arizona, Bailey and Jo to the prison floor of Tri-County Hospital. Why? Read on and find out!

‘I DON’T BITE… I MEAN, I HAVE’ | Though the trio of doctors had already worked a long day, as the hour began, they left Grey Sloan for Tri-County in order to seize their window of opportunity to treat Kristen Rochester, a 16-year-old inmate whose unborn daughter had an acardiac twin — as I understood their explanation, essentially a vampire tumor that was making the viable baby’s heart pump for two. While Jo was relieved to have some distraction from the trial that she still believed was taking place the next day, Bailey was rattled by the prospect of being behind bars and unsympathetic to those who found themselves there. When Jo, speaking from experience, argued that stuff happens to people, the chief shot back that “stuff does not just happen to you, you happen to stuff.”

Once the M.D.’s made it through security — with even Arizona’s prosthetic leg being inspected — they met Kristen’s attorney, Amanda, and were escorted to the inmate’s room by hostile Dr. Eldredge, who was pissed that the “V.I.P. patient” was getting special treatment that would rile up her fellow jailbirds. Mind you, Eldredge seemed like a pussycat compared to Kristen. The mom-to-be wasn’t just described as a dangerous monster who wasn’t allowed to initiate physical contact with the doctors, she actually seemed to be a dangerous monster, lunging the first chance she got at Eldredge and dislocating her finger. After Kristen was cuffed to the bed — against Amanda’s strenuous objections — the patient got to work endearing herself to the docs, starting with Arizona, who she said talked “like unicorns and rainbows are about to shoot out of [her] ass.” Charmed, I’m sure. 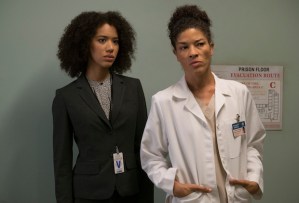 ‘SHE’LL KNOW I’M HER MOM FOREVER’ | While Arizona examined Kristen, she revealed that she was eager to go into labor, because once she did, her mother would be allowed to come “to hold my hand and crap.” So she was predictably displeased to learn that she wouldn’t be giving birth that night, Robbins would just be cutting the connection between the baby and the mass that was draining its resources. It wasn’t even considered surgery, it was merely a procedure. As Kristen grew more and more riled, she blurted out that she wanted to deliver, stat, so that her mother could adopt the baby, then she could see her daughter anytime Mom visited. Just then, Amanda was called away to the E.R., where another client had a pulled knife on the surgeon.

Later, as Bailey overcame her fear of inmates enough to treat a random patient whose wound was oozy and smelly, Arizona began trying to turn Kristen’s baby around in utero. Robbins had scarcely begun, however, when she was called downstairs by Eldredge. Put in charge of the maneuver, Jo attempted to bond with Kristen by admitting that, after being tossed from one lousy foster home to another, she’d once helped a guy knock over a convenience store. In turn, Kristen described her own picture-perfect preppy upbringing, complete with casseroles for dinner, an awesome swing set and a mom who, when she wasn’t around the other prep-school parents, didn’t even wear makeup, much less pearls. She also said she planned to name her daughter Ellie. But “if you tell anyone I said all that crap,” she added, “I’ll kill you.”

‘STAY IN YOUR OWN LANE’ | When Bailey — horrified by the conditions she’d witnessed — tried to offer advice on managing hospital assets, Eldredge ushered her into the supply room to show her exactly what assets she had to work with. You see, she explained, “I don’t allocate my resources, the state does.” Meanwhile, Arizona discovered that she’d been called downstairs to speak with Kristen’s mother, Emily, who, it turned out, wasn’t there for her daughter, just her granddaughter. In fact, she had no intention of ever bringing the baby to see Kristen. “I hate people,” Jo muttered when Arizona filled in her and Bailey. Nonetheless, they wouldn’t tell the patient. “We do not hurt her more,” Arizona argued, “not right now.”

Of course, that agreement didn’t last long. During Kristen’s procedure, she noted that her mom never told her anything juicy, and she “hated being kept in the dark.” Cue Arizona exhibiting the worst poker face in recorded history, and boom! The patient freaked, thinking something was wrong with her daughter, started wriggling and wound up in preterm labor! Even then, Emily didn’t want to go to Kristen, whom “the baby is better off never knowing,” she suggested. As the teen’s cuffs started to bother her more, and her contractions grew stronger, she became frantic for someone to get Amanda to get her mom there. Finally, Jo blurted out the truth — her mom was there already, she just didn’t want to see her. 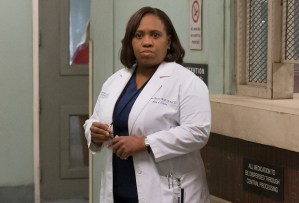 ‘I WANT MY MOMMY’ | When Bailey took Kristen’s hand, she shouted at the doc to get off. But, at this point, Miranda was done being afraid. “You’re not alone,” she reassured Kristen, who begged the docs to “tell [my mom] I wish I could take it back… and maybe she’ll come.” Knowing that it wouldn’t matter to Emily, Bailey just repeated, “We’re here with you.” Eldredge even softened, freeing her recent attacker from her shackles. After the baby was born, Kristen didn’t want to see her. “I don’t get to be her mom at all,” she said. “I’m no one.” But, when she heard the girl cry, she changed her tune and held her daughter. “I’m your mama,” she whispered. “Remember me.” Once the baby was taken away, Jo put her arm around Kristen and drew her a mental picture of the wonderful life Ellie would live.

As for Kristen, she’d soon go back to genpop, Eldredge told the docs, to finish serving her 20-to-life sentence. What had the teen done? Bailey didn’t wanna know. Downstairs, Emily revealed to Arizona that — see ya, Ellie — she’d be calling the baby Hannah. Unable to contain her dislike a second more, Robbins asked, “If this one makes a mistake, will you leave her, too?” Before departing Tri-County, Bailey told Eldredge that if she was ever looking for a new job, she should come to Grey Sloan. And vice-versa, Eldredge replied. On the ride home, Bailey revealed to Jo and Arizona that there wasn’t going to be a trial, Alex was taking the plea deal. At that, Jo had to get out of the car and puke.

So, what did you think of the midseason premiere? Solid hour, right, but also kinda mean, considering how eager we are to learn whether Alex really took the plea deal? Do you think he went through with it? Hit the comments.