Learning that she was being called to testify at Alex’s trial, Jo finally confessed to her former almost-fiancé that she was married to an abusive husband from whom she’d run away (and might have to again). Rather than put her through that, Karev decided — over Meredith’s strenuous objections — to plead out and go to prison for two years. (Whether he’d actually go through with it remained to be seen.)

In other developments, Richard learned from Eliza before Bailey that his role in the residency program was becoming “ornamental,” which led to Maggie teaming up with Jackson to drum up support for her dad; “human rainbow” Arizona played hilariously hard-to-get with Minnick, then agreed to have a drink with her; and, over the course of treating a two-timing husband with Owen, Nathan not only learned that Hunt had been married before Amelia, he’d cheated on first wife Cristina.

Speaking of Amelia, she left a “Dear Owen” letter and took off! Here, Kevin McKidd, who plays Hunt, discusses his character’s next move, potential reaction to Grey and Riggs’ hookup and the Megan bombshell that he hopes will be dropped.

TVLINE | Owen and Nathan made some real progress in healing old wounds in this episode. How much of that do you attribute to Owen’s “conversation” with Megan last week?
He definitely had time in that O.R. to come to terms with something that he never had. He let go of some of that anger, and that’s very significant for him. In the episode we’re about to shoot, we’re going to see Owen and Nathan sort of confiding in each other more.

TVLINE | Which, evolutionally, makes sense. Once upon a time, they were tight.
Right. Owen was going to be Nathan’s best man. They were the best of friends. So it’s really great to start unpacking that and seeing what form that friendship is going to take now. They’re both very headstrong men who are dominant in their fields. So there will obviously be clashes between them, too. But we saw in the recent episode where they performed surgery together that they work brilliantly as a team. Hopefully, we’ll see more of that.

TVLINE | How do you think Owen will react to Nathan’s sorta-relationship with Meredith?
Owen will probably be the last to know. He tries to stay out of the gossip. But I’m hoping he doesn’t take it too badly. He’s very connected to Meredith. She’s been his rock for quite some time, [and will be] especially during the disappearance of Amelia. He’s been really leaning on Meredith, so it’ll be interesting to see where Owen stands [on her and Riggs’ possible romance]. He doesn’t really have much right to be too territorial over her. He knows the hell that she’s been through, and knows more than anyone that we all deserve a chance at happiness. So you never know — in a few seasons’ time, Owen might be Nathan’s best man! 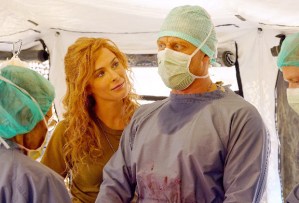 TVLINE | Unless, of course, Megan turns out to be alive.
To throw her into the mix [with Meredith and Nathan] would be fascinating and pretty explosive, and Owen would be right in the center of that — mediating probably! It would be a fun thing to play with. I would love for Megan to appear again down the line. She’s really about the only person you’ve ever seen who has been able to poke fun at Owen!

TVLINE | In the meantime, is he going to be able to respect Amelia’s wishes and not try to find her?
Owen being Owen… man, he’s a hunter. You saw what he was like when Megan disappeared: He didn’t stop looking for her for years! So he’s going to be like a dog with a bone. He’s going to find out where she is. It’s hard for him, because he loves her! But she keeps doing this thing where everything looks like we’re on track, and then something happens and she pulls away.

TVLINE | Yeah, you can kinda only do that so many times.
There’s going to come a point where Owen has to confront her. He knows the cross she has to bear, but at a certain point, you have to start living your life and stop running away from it. [Of course], for Owen, the big nightmare of this situation is the baby question. He has been for many years longing to be a father, and that was not possible with Cristina. He and Amelia had the conversation before they got married, but the goalpost seems to have moved, and maybe she doesn’t want kids anymore. That’s Owen’s worst nightmare, in a sense. He thought they’d already made those agreements. Now he’s faced with the same nightmare choice [as when he was with Cristina]: Can I be with someone who potentially doesn’t want to raise a family with me, when it’s the thing that I really want to do? We’re almost up to the point of deal-breakers.

TVLINE | I know Amelia left so that Caterina Scorsone could go on maternity leave. Do you know how long she will be off the show?
I think she’s gone about three episodes. So Owen and Amelia will have the talk soon, I imagine.

What did you think of the fall finale, Grey’s fans? Are Owen and Amelia finito? Is DeLuca going to drop the charges against Alex? Are you digging “Ariliza”? Hit the comments.