The Legends of Tomorrow resume their timey-wimey adventures tonight at 9/8c, as the CW sophomore sets course for a brand-new time slot, as well as some real “head-scratcher” episodes!

The series left off with the reveal that the nascent Legion of Doom (currently comprised of Eobard Thawne aka Reverse-Flash, Damien Darhk and Malcolm Merlyn) is in search of something called the Spear of Destiny — just as viewers also learned that Rip Hunter is alive and well… though in the year 1967 (!), where he is an American (!!) film student named Phil (!!!).

How great a threat is this mystical Spear, and what(/when?) is going on with the Legends’ former captain?? Co-showrunner Phil Klemmer shared with TVLine the answer to those questions and others.

TVLINE | Marc [Guggenheim] touched on this at TCA, but I’m curious to hear how you would describe the Spear of Destiny and what it does, compared to typical timeline tinkering?
So far this season we’ve been traveling around in time, correcting aberrations. But the second you correct something, somebody could just go back and screw it up all over again. We’re sort of “doing our edits in pencil.” In Final Draft talk, we’re in Revision Mode. The Spear of Destiny allows you to “shoot the white pages,” or write something in indelible ink. It’s no longer about, “Ooh, it’s going to create an aberration that could have some cataclysmic consequence in the future.” The Spear of Destiny allows you to change reality itself — which also means that somebody can’t go back and change it. It renders our team ineffectual, because as a mystical artifact that is derived from the blood of Christ… it imparts a divine power upon whomever wields it.

TVLINE | And it can be used with precision. It’s not like you cross your fingers and hope you effected the change you want.
Exactly. If you want to get rid of Phil Klemmer with the Spear of Destiny, I could be erased with no repercussions. It’s a perfect editing tool that allows you to shape your world to whatever you’d like it to be.

TVLINE | The way the fall finale left off, are we to infer that Rip used it on himself?
You shouldn’t infer that, but you should infer that Rip — who obviously is suffering from some version of confusion or amnesia — is clearly not Rip, he’s clearly living in the ’60s, attending film school in Los Angeles. You can definitely infer that the disappearance of the Spear is related to Rip’s current plight. The problem is, Rip doesn’t even know his name is Rip. He thinks his name is Phil, and he doesn’t even remember what the Spear of Destiny was. To him, our team looks like a bunch of weirdos when we try to tell him, “You used to be a time master! Come with us.” He thinks he’s just having an acid trip. 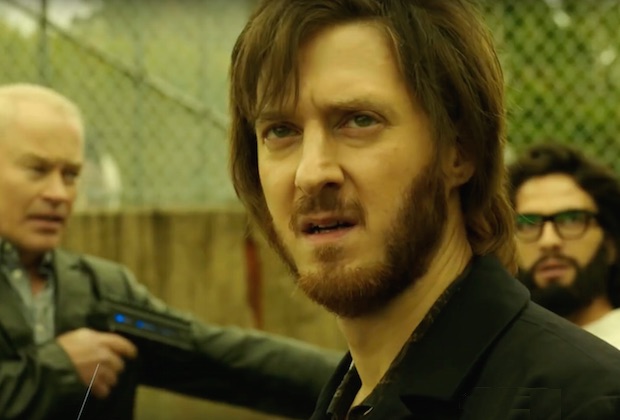 about the decision to disappear Rip for a chunk of the season and bring him back in this new form. Was it to create a mystery arc? Was it to accommodate Arthur Darvill’s schedule [with other projects]? Was it about resetting his character…?
Arthur is just such a fun, talented, incredible guy. He’s hilarious, and we gave him this very stern and dour character, with a dead kid, burdened with saving the world from Vandal Savage. We were like, “Man, we are not using all of his gears.” And obviously we couldn’t have him just play a new person at the beginning of the season. But it worked out both ways, because we wanted our team to not have an adult in the room. We wanted them to go on these wild adventures without someone reminding them of all the things they’re doing wrong.

TVLINE | How soon will we learn the Legion of Doom’s precise need for the Spear?
Very soon. [In Neal McDonough, John Barrowman and Matt Letscher] we have these three guys who could be alone not just the sole bad guy of a series but the lead of a series, so Episode 10 [airing Jan. 31] is told from their point of view. We’ve had them be evil and do evil things, but we haven’t really gotten under the skin of why they’re doing it, and we haven’t gotten at the fact that they’re not exactly standing shoulder to shoulder. 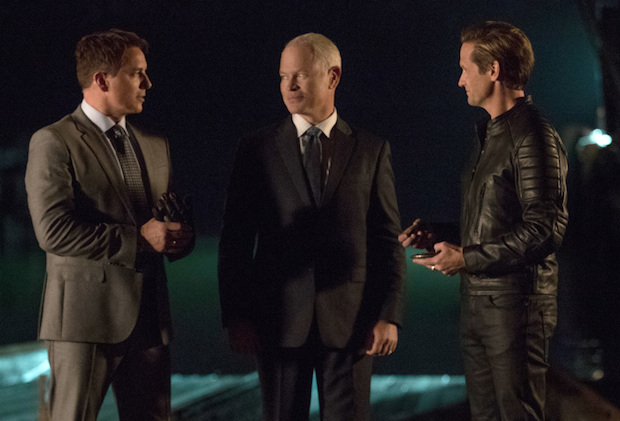 That’s one of the problems with creating an alliance of villains — there is no honor among these guys!

Also, we know what Merlyn wants, because we’ve seen his past on Arrow, and we know what Damien Darhk wants, because we saw him die on Arrow. But we don’t really know what Eobard Thawne wants, and the big question is, “Why would a speedster who seemingly has unlimited power need anybody’s help?” Why would he recruit these two bozos, other than it being fun to have them around? That’s the question we’ll answer in Episode 10: What is Thawne’s weakness? What does he want?

TVLINE | Will that episode also show us how and from when Malcolm was recruited?
You won’t have to wait long for that answer, either. The interesting thing is that once Merlyn and Darhk realize why Eobard wants the Spear of Destiny, it gives them leverage and it equals their partnership. They are no longer just taking orders, which is fun, because you want to see these guys jockeying to be the head of the Legion.

TVLINE | With the Spear in play, will the team still be addressing aberrations on a week to week basis?
Oh, yes. We’ve got some incredible marquee time periods. We’re going to hit the American Revolution, see some great figures from history. And if you ask me, we will meet one of the most important figures of literary history in the 20th century, in the context of a world war.

TVLINE | And did I see that Guinevere was cast?
Yep, we get to go back to Camelot, and as we know from the season premiere, Ray’s been there already. And we’ll get to figure out what happened to the JSA, because we haven’t really touched on them recently. We’ll see how they figure into the whole mythology concerning the Spear of Destiny. It’s a really nice balance of mythology/Spear of Destiny/Legion of Doom episodes and just fun historical romps, which is what this season does so well. And then there are a couple of real head-scratcher episodes, where I don’t know what the hell we were thinking!