What exactly sends Arrow‘s Felicity down a dark path? Which Criminal Minds hero is due for a change-of-course? Might Timeless add a time traveler? Read on for answers to those questions plus teases from other shows.

Can you give Arrow fans any hint on who “the people a bit tied to Felicity’s past” are? —Jenny
I know many of you were speculating that Felicity’s sketchy father, The Calculator, might be an ally in her own anti-Prometheus agenda, but co-showrunner Marc Guggenheim nixed that notion. “I would definitely love to bring him back, and I would love to bring Charlotte Ross back as Donna, but [we were like], ‘Let’s tell a new story, something we haven’t done before.'” Beyond that, he would not elaborate, except to say, “As with all things related to Arrow, it’s not what you initially think it is, and it will ultimately relate to the season’s overall theme of ‘legacy.’ But it will be very specific to Felicity.” As for those who are concerned that Felicity’s “darker” direction was triggered by a guy she could barely call her boyfriend, Guggenheim affirms it was in fact born of “a bunch of stuff” — including the Havenrock tragedy, which will be addressed directly in Episode 11 — “and Billy was the final straw. It’s also the sum of the fact that Felicity has been living in this darker world for the last four-plus years now…. How has that affected her way of thinking about things?”

Any scoop on Criminal Minds‘ Reid? —Emilie
You betcha! Though… you may not like it? I asked Kirsten Vangsness about the latest episode she co-wrote with show boss Erica Messer, which is titled “Spencer,” and it sounds like a, um, eventful hour for said character. Having previously penned episodes that killed off Gideon and paved the way for Shemar Moore’s exit as Derek, “I seem to co-write the episodes that change the course for people,” Vangsness notes. “That does not mean the ends of people, it just changes their course. So [Episode 13] is a course changer. It’s a course changer.” 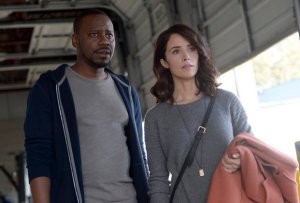 of the other Timeless characters — like Agent Christopher, Connor Mason or Jiya — travel in the Lifeboat through time? —Mindy
As a matter of fact, “We’re going to see somebody train to do that,” exec producer Shawn Ryan answers. “I won’t say whether he or she does it immediately or not. But there are going to be people who understand that it’d be nice to have a deeper bench than they currently have.” Over on the Mothership, meanwhile, “We’ll see a new traveler in the second half of the season. We’re going to expand our cast of characters in the time travel arena a little bit.”

Can I get some scoop on the Supergirl/Flash musical? —Jenna
Above and beyond what we reported on Sunday, EP Andrew Kreisberg said that the two-parter — which starts on Supergirl — will not feel like a standalone for either show. “What I always loved about what Joss Whedon would do with [Buffy’s] ‘Hush’ or ‘The Body’ is he’d have these very special episodes, but they were intrinsic to the ongoing storytelling. So when we get to the musical episodes,” Kreisberg previewed, “both Barry and Kara will find themselves at pivotal crossroads on their respective series, and the experience of going through the musical will have a great impact on both series moving forward.”

In the wake of that shocking NCIS death, do we have a new Big Bad, or will Chen be caught fairly quickly? —Ellys
On the heels of offing Bishop’s boyfriend Qasim (among other, global treachery), “He’s going to be the thorn in our side for a while, yeah,” Rocky Carroll confirms. On the lighter side of things for Vance, Mary Stuart Masterson is due back as Congresswoman Jenna Flemming. “I think it is good that Vance has a bit of a spark there,” Carroll smiles. “We’ll see what it happens!”

Anything new on Chicago Fire? —Tory
Given that Severide clicked with leukemia patient Anna and also made Stella his emergency contact, you might assume that a love triangle is brewing. “Through some of [the characters’] eyes, it might be, but not all of their eyes, if that makes sense,” exec producer Derek Haas says. And it sounds like Stella is the one getting Friend-zoned. “We’re going to continue deepening that relationship [between the firefighters], but less romantically,” the EP shares, adding that it’s more about “a real friendship that could go romantic, but you’ll have to wait and see.” Bonus scoop: The reappearance of Antonio’s ex-wife (played by America Olivo) in Episode 12 may spell trouble for a newbie relationship. “There’s going to be complications to the ‘Brettonio’ romance,” Haas teases. “It can’t always be smooth sailing.”

Will Code Black‘s Leanne get more action? She’s my No. 1 cowboy! —Astrid
First off, can I tell you how delighted Marcia Gay Harden was to hear you call her character a “cowboy”? (“That’s my favorite thing that I’ve heard,” she kvelled, “and if I’m not careful I’m going to cry!”) As for what’s to come for Leanne, “The last two episodes are amazing. It’s a two-parter where we’re combatting a viral disease, and we have to go out into the city to figure out where it’s coming from, and Leanne is compromised, in many, many ways.” 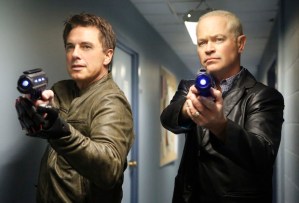 any scoop for Legends of Tomorrow? —Liz
EP Marc Guggenheim says, “The second half of the season [starting Tuesday, Jan. 24] is really paying off the Legion of Doom and what we now know is the MacGuffin of Season 2, the Spear of Destiny.” Elaborating on the reality-altering DC Comics-based gizmo, he said, “Changing time is like painting with the biggest paintbrush possible; using the Spear of Destiny is like using a very, very fine-point technical pen.” Ergo the Legion turning Rip into an American (!) movie director in the year 1967. “Arthur [Darvill] has so embraced this version of Rip,” shares the EP. “He’s obviously doing an accent, but he’s also doing a whole different performance.”

Will we see Michael Raymond-James come back to Once Upon a Time as Rumple’s son Baelfire again? We miss him. —Rebecca
Though Robin Hood is alive and well in the Wish Realm, Baelfire/Neal is not — in large part because his absence better serves the story to be told of Emma’s new existence. “We always would love to get Michael Raymond-James back,” says co-creator Eddy Kitsis, “but when we can’t, we will make a huge wall-sized oil painting of him,” as displayed in the midseason finale (and requiring MRJ’s approval). EP Adam Horowitz notes that because the Wish Realm is not about time travel, “Baelfire didn’t jump off to Victorian England to live with the Darlings” and eventually meet Emma in our world. “There was a whole different series of events that led to Henry being born.”

Matt, there has been a lack of FitzSimmons lately on Agents of S.H.I.E.L.D.! Please tell me that the writers are planning for something for them. —Tavia
I have to say, the forecast looks, ultimately, promising for the scientists-in-love. Aida’s reveal as an LMD “will have some ripple effect, because he did that without her knowledge. So they’ll have to get over some hurdles,” co-showrunner Jed Whedon tells me. “But theirs is a forever love.”

I am a huge fan 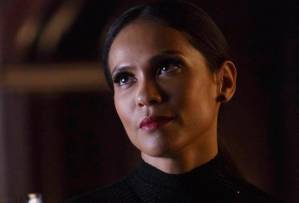 of Lucifer and was wondering if you had any scoop on the back half of the season. —Lucifer Morningstar
If I raised your eyebrow with this Maze tease in our midseason preview special, here’s a bit more on the dilemma she will be facing: “Her arc for the season has been trying to get her own groove going, to not be all about Lucifer all the time,” notes co-showrunner Ildy Modrovich. And in doing so, “She’ll be pushed into having to, maybe, possibly, hurt Lucifer, and be part of mom’s plan. She’ll get to the point where she’ll think that maybe she has to even betray Lucifer, in order to get full independence.”

Would you happen to know if The Librarians are ever going to “go there,” romantically, with Jacob and Cassandra? —Ashley
I hand-delivered your question to showrunner Dean Devlin, who promptly replied, “Yes, I do know.” :-|

Real questions, real answers! If you need the Inside Line on a favorite show, email InsideLine@tvline.com!  (With reporting by Vlada Gelman)