If you don’t quite remember where Quantico‘s fall finale left off — after all, it aired two months ago — fear not: FBI Agent Hannah Wyland is here to do the snarky hard work for you.

The ABC drama’s move to Monday meant that the show’s Powers That Be had to do something to bring new viewers up to date, and quickly. Enter Eliza Coupe’s returning character, whose interrogation of Alex throughout the winter premiere proves beneficial not only for newbies but also for those of us who have trouble telling our AIC from our CLF from our CIA.

The episode does a nice job of summing up what’s come before and moving us forward — particularly with Miranda’s terrorist truth bomb at the end of the hour. Read on for the highlights of “Cleopatra.”

HELLO AGAIN | “Alex Parrish, national hero, in the wrong place at the right time, two years running,” Hannah says, pulling up a chair at the FBI and sitting down to launch a barrage that’ll bring us up to speed. Here’s a quick recap. Ten months ago, Alex was out of the FBI but still at The Farm, still engaged to Ryan but no longer part of his work-related inner circle, still trusting Harry but still wary of Owen, and still touting the party line that she was no longer part of the bureau’s AIC investigation (though very much part of her own, private AIC investigation).

In the flashbacks, just before the gang’s final meeting at the safehouse, Alex and Ryan think it’s a good idea to shag on that gross mattress one last time, for posterity’s sake. Sadly, we do not get a shot of Miranda’s face when she walks in and the room smells like Eau d’ Bad Decisions, but we do see her as Ryan fills her and Nimah in on his forced wetwork (after Alex leaves). The fact that Léon, and not Ryan, was chosen to actually kill a guy means someone likes him, Miranda points out.

Speaking of that task: The other two are having very different reactions to the murder and its aftermath. Dayana bounces around campus like she just finished a Soul Cycle class: glowing, smiling, radiating positive energy. León, on the other hand, looks like a Dementor is 95 percent done sucking out his soul, and there’s nary a chocolate square to be found.

In other Farm team updates: Sebastian is back and smiling after a Kairos retreat, Owen is distracted in Lydia’s absence, and Harry is wearing only a towel.

“Why are you telling me all this? Who are these people? Why should I care?” Hannah demands. (Heh.) Alex calmly points out that most of them are involved in the hostage situation, and oh yeah, “Ryan is a terrorist, Hannah.”

OWEN UPDATE | In the flashback, we watch the recruits mixing it up at The Goldleaf, having varying levels of success while seducing college students in order to get their phone numbers and climb the murder board. The rationale: Their work in the CIA will require them to seduce assets. My rationale: Watching pretty people flirt is fun.

While Dayana and León discuss their murder excursion in public (!), Alex and Ryan make a pact: He’ll share anything he learns about the CIA via his FBI work, and she’ll quit trying to suss out the rogue faction by herself. Anyway, in the present, Alex informs Hannah that she put Owen in her sights anyway, because he was important to her investigation.

HAPPILY NEVER AFTER | After the college kid shenanigans are done, Owen announces that everyone is going to a wedding rehearsal party, where they’re going to seduce their assigned marks. Now, can anyone put it more bluntly? Anyone? “You’re going to force us to sleep with people,” Sebastian says, disgusted. Well done, Mr. Chen! Owen’s reasoning: “Someone who falls asleep next to you is willing to show they’re vulnerable,” and vulnerable people give up the best goods. Alex is planning to go after Owen, instead — all the better to find out what he’s hiding — so Harry gives her a little something to slip into his drink to usher the process along.

At the party, Alex and Ryan are assigned to bed the bride and groom. “So our assignment isn’t seduction, it’s homewrecking?” she laments, before getting over it in record time. “Oh well, duty calls.” (Heh.) She also blithely gives Ryan permission to do whatever he needs to do.

Long night of drunken sex short: Alex drugs Owen and gets him up to his room, but doesn’t get much out of the night. Although he’s supremely uncomfortable and upset about it, Sebastian sleeps with a woman — but he kisses Harry first, because he is powerless against the charms of wry British men wants to ruin the Brit’s chances with his mark, who’s watching. Dayana gets her mark up to his room and appears to be having a flashback to her tortured past when she freaks out and knocks him out — or, at least that’s how it seems when she panics and calls León to help her clean things up. But later, it seems that she was on a mission from someone else to get information from the mark, and her PTSD act was a fake.

Info Shelby gets in the present seems to back up that Dayana is not what she seems: It appears that she was part of a kill team in Surabaya sent to eradicate an undercover agent. And — twist! — “The terrorists are not the AIC. They are hunting the AIC,” Shelby announces. “So, right now, downtown, one group of rogue agents has taken another group of rogue agents hostage,” Hannah surmises, saying that she wants to confer with Miranda. But then the three ladies realize that Miranda’s been acting rather shady… and little do they know, she’s listening in. And when Shelby and Hannah leave Alex alone, Miranda screws a silencer on her weapon and enters the room. “You and I need to talk,” she tells Alex. 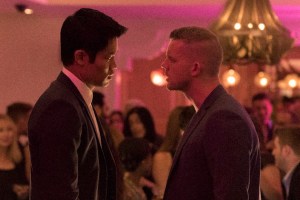 REGRETS, I’VE HAD A FEW | Back in the Farm timeline, it’s a rough morning after for most of the recruits. Ryan and Sebastian are at the top of the murder board, meaning they bagged their prey, so to speak. Neither looks happy about it. Harry tells Alex he saw Ryan with one of the AIC phones. León shows up at Shelby’s so agitated and so suspicious of her interest in him, Nimah nearly busts in, gun drawn, to save the blonde. But Shelby calms him, and then they suck face.

Meanwhile, Harry starts to tease Sebastian about besting the others in the sex challenge, but Chen starts crying and Harry stops being such a jerk. “I woke up with someone who thought I was a good person, and I’m not,” Sebastian says, sobbing. “I did it just to prove to myself that I could. And to prove it to you. What’s wrong with me, Harry? What did I do?” But for once, Harry’s got no glib retorts. He hastily apologizes and runs out of the room, saying, “I can’t do this.” Later, the woman Sebastian bedded calls to see when they’ll go out on the date he promised her, and they make plans for the coming weekend. (Fun fact: Sebatian’s mark at the party is the same woman he introduces as his wife in one of the previous episodes.)

At the soon-to-be-retired safehouse, Alex confronts Ryan about being chosen for the AIC and he confronts her about saying she’d let things go. “I lied,” she says. Well then! He gets all tough-talk, saying that the rogue faction chose him, not her. “That’s what I wanted you to believe,” she replies, whipping one of the burner phones out of her pocket. She returns to the group’s house, where Harry reveals that the liquid Alex put in Owen’s drink was actually a radioactive tag that’ll allow them to track him for about a week.

WHA? | In the present, Alex and Miranda leave the FBI and get in a car. Alex wonders why she should trust her former teacher. “You’re right, Alex, I wouldn’t trust me either,” the older woman says. “But I will tell you this: I am one of the terrorists. And after the conversation that we are about to have, you will be, too.”