Need to catch up? Check out our post on the previous Sleepy Hollow.

I’ve got to give it to Sleepy Hollow‘s Diana: Despite all of the revelations heaped upon her this episode, she really keeps her head.

What, on the occasion of the Headless Horseman’s return, you thought I wouldn’t make a noggin pun?

In this week’s installment, Agent Thomas becomes aware of Headless’ existence, Ichabod’s real birthdate and the fact that her daughter has a biblically foretold world of pain ahead of her. Is it any wonder she ends the hour deciding, no thanks, this whole supernatural thing isn’t for me?

Read on for the highlights of “Head of State.”

NEW DIGS | We open on Ichabod examining what at first looks like another cobwebby old haunted house but turns out to be the grungy apartment he’s thinking of renting. Jake assumes that Captain Browncoat will be happy there; after all, the trendy neighborhood is “right up your O.G. hipster vibe alley.” Jenny doesn’t help when she looks at Ich with new eyes: “the facial hair, the boots, a proclivity toward obscure donut toppings” she agrees, deeming him a hipster. Crane rails against the assumption, as well as the gross condition of the flat, but when Jake points out that the place costs a quarter of what other apartments do, Ichabod decides he’ll take it.

OLD ENEMIES | We become aware that Sleepy Hollow is unfolding in a reality different from our own when the president of the United States — a black female — is nearly done in by the Headless Horseman while her motorcade cruises through Washington, D.C. She escapes unharmed, but an eyewitness account that makes its way onto Diana’s desk indicates that the “soulless blaggard, merciless killer, death incarnate, dark rider of the apocalpyse” (Ichabod’s words) is back.

“I figured the bastard would show his lack of a face sooner or later,” Jenny says when she, Jake, Alex, Diana and Crane gather at The Vault. And they eventually realize that the headless wonder is after POTUS because the president is the most powerful person in the country, and therefore has a lot of “mojo” in her cranium. In short, “The horseman seeks the president’s head,” Ichabod says.

TRUTH BOMB, INCOMING! | But something stopped the Rider Formerly Known as Abraham Van Brunt from getting to Madam President; the eyewitness describes it as something like a forcefield. Upon closer inspection of the crime scene and the tunnels beneath it, the team realizes that a series of runes and glyphs are carved into the ground, and there’s a disc filled with mercury directly under the area where the horseman hit the brakes.

During a research session back in The Vault, Ichabod says he’s seen similar work before, in the workshop of Benjamin Banneker, a free African-American in colonial times whose plans for an ideal American city were used as the basis for Washington, D.C. In a flashback, we watch Ichabod and Banneker discuss the hypocrisy of men like George Washington and Thomas Jefferson advocating for freedom and equality while owning slaves. In the present, Jake starts to wonder how Ichabod has all of this Banneker info when the man’s papers were destroyed in the 19th century.

“Just admit it, it’s OK,” Jake says. “You’re a time-traveler.” And Jenny, realizing the jig is up, says, “He is, technically, 265 years old.” Ichabod launches into his origin story, but Diana is more angry about the fact that he’s been hiding this truth from her. Anyway, Jenny recognizes one of the symbols from the tunnels on a folio of Banneker’s papers at that black market auction she and Joe (sniff!) crashed a while back, and a little Googling shows that it was bought by one Malcolm Dreyfuss.

WHAT’S DREYFUSS’ DEAL? | When Ichabod and Diana pay the quadrillionaire a visit, he jokes (not a joke) with them that his wealth stems from him selling his soul to the devil at 25. Then he willingly surrenders the Banneker plans, adding that even though J Street doesn’t exist in the nation’s capital, it exists in a supernatural realm and can — theoretically — be accessed, though most haven’t been able to figure out how. 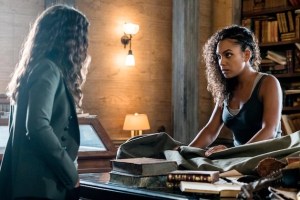 But back at The Vault, Diana has a bigger problem: After Jenny mentions Abbie’s Witness-hood starting when they were standing in front of four white trees, Diana realizes that Molly had drawn those very trees in her notebook. Other pictures, of the Horseman and Crane, were dated from before Ichabod came into their lives. Later on, Ichabod realizes it’s time to clue Diana in, and he tells her that Abbie’s “mantle” of Witness-hood has passed on to Molly. And that’s when Headless, all dressed up as a motorcycle cop, shows up.

Luckily, in the tunnel underneath the hypothetical avenue, Jenny, Jake and Alex figure out how to open the door to J Street. Ichabod and Diana lure the evil creature inside, then she saves Ichabod’s life by shooting Headless as he’s choking Crane, then they both run out, trapping Headless inside J Street forever.

Or maybe not? After the pair leave, Dreyfuss and Jobe reveal that they’re on J Street, too. Malcolm promises Headless an escape, the president’s head and revenge on Ichabod. Oh, and Jobe has in his possession the Banneker disc Alex used to help open the portal.

DIANA, OUT! | Yay Team WTF, right? Wrong, at least from Diana’s standpoint. She wants Ichabod and his friends to stay the hell away from Molly. “You cannot escape this,” he says sadly. “Watch me,” she responds, walking away.

Back in his new abode, Ichabod stuffs Chinese food in his face and attempts to put together a piece of furniture from Ikea’s Hemnes line. (Good luck, dude.) When he hears a noise coming from his closet, he thinks it’s just a squeaky floorboard… and then a small spot of something he stepped in while on J Street starts to get bigger and bigger, then it jumps off the ground and attaches to his face like that Alien creature. Well, that’s probably not good.