Question: Any scoop on what will happen between Alex and Jo in the second half of Grey’s Anatomy‘s season? —Camila
Ausiello: I asked Camilla Luddington if we’ll meet Jo’s MIA hubby anytime soon and here’s what she told me: “I think it’ll happen when things are going well between them — because that’s how Grey’s Anatomy works. They’re in such a desperate situation right now, so I don’t think it’ll happen immediately. But maybe by the end of the season.” Bonus Scoop: Next Thursday’s prison-based episode was actually shot on the set of Scandal. “They built a prison for us on the Scandal set,” Luddington reveals of the standalone hour, which finds Jo, Bailey and Arizona going directly to jail to help a young inmate give birth. “We got a little change of scenery.” 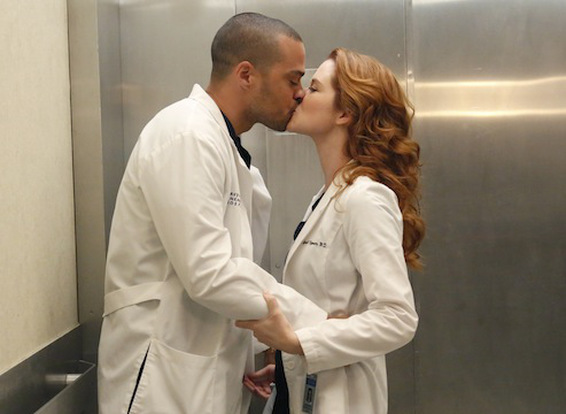 Question: Any additional details on Grey’s Anatomy‘s #JapriltheSequel? —Kelly
Ausiello: Little Harriet “is very present in the episode — off and on screen,” Sarah Drew tells me. “There’s a scene where I’m on the phone and I’m actually just finishing pumping, which is kind of cool. All the equipment is in the shot. We should see that stuff, because that’s part of what it means to be a working mom. I always advocate for more baby time. Not necessarily having scenes with the baby, but including the baby in conversations and just generally establishing that that [Jackson and April] are aware that they have a baby.”

Question: Could Steve Carell’s tweet about The Office coming back at NBC not be a “typo” but a hint? –Jon
Ausiello: It could not be a typo. But it isn’t.

Question: I’d like some scoop on Criminal Minds, please. —Nabil
Ausiello: If you need your mind eased in the wake of this big Reid teaser, A.J. Cook… probably won’t help matters any. “All of the ‘drama’ that’s happened this year has opened the door to write some interesting storylines, so we’re going with it — and we’re going to shock a lot of people,” she told Matt Mitovich. “We’ve got some very personal stuff happening to some very loved characters, so there will be mayhem within the fandom. But don’t worry, stick with us.” As for JJ herself, Cook would only say this: “Something happens that really rocks her, indirectly. She has a hard time handling what happens.”

Question: Any scoop on UnREAL?
Ausiello: Now that we know who’s playing Everlasting’s first female suitor, how about a little bit on some other new Season 3 characters? I hear the show is casting Jay’s “fiercely gay” boyfriend, Xavier, who is involved in an underground gay hip-hop movement called Sissy Bounce; and Crystal, Chet’s 20-something, sweetly sexy swimsuit model girlfriend who’s not dumb but also not a Rhodes Scholar. Log your casting suggestions in the comments!

Question: Can you give some scoopage on Scandal? Specifically on what Fitz might be up to now that is he is no longer POTUS?—Lindsay
Ausiello: Fitz’s term may be ending, but heavy is the head that still wears the crown. In fact, next Thursday’s season opener hinges heavily on a decision the “lame duck” POTUS must make.

Question: Now that he’s a dad, any chance Howard will track down and forgive his own father for abandoning him on The Big Bang Theory? —Patrick?
Ausiello: Yes, there is a chance. Per showrunner Steve Molaro, that possibility “is always floating around in the ether of the show. We don’t have immediate plans to tackle it, but I’m confident one day we will.” 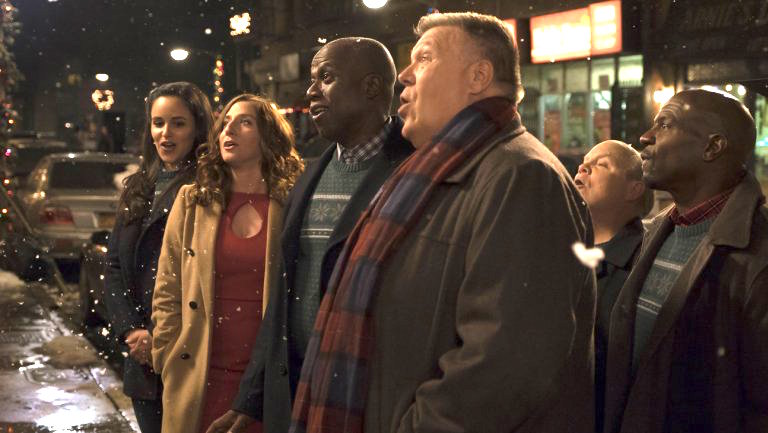 Question: I’ve just finished watching the winter finale of Brooklyn Nine-Nine — please tell me Gina’s coming back! — Jessica
Ausiello: Indeed, “Gina got hit by a bus!” reminds Stephanie Beatriz, who plays Diaz. “Is she gonna live? Is she gonna die?” Beatriz was mum, but from the sound of it, a reduction in head count could be fortuitous. When(ever) the season resumes, she previews, “Crime is generally down in Brooklyn, which is great, but that means that jobs might be expendable. Precincts might be expendable. We shall see!”

Question: Can someone from Bones tease the meaning of “447” with just one word? —Bethania
Ausiello: How about six? “It has to do with time,” teases exec producer Michael Peterson of the longstanding mystery, which will be solved in the show’s series finale this spring. OK, here come 20 more words: “I think it’s one of the most impactful moments in Booth and Brennan’s life,” adds the EP. “It’s the moment that everything changes.”

Question: Do you have anything to report on the third and final season of The Leftovers? —Antony
Ausiello: The last eight episodes will have you ROTFLOLing. OK, that’s a bit of an exaggeration, but Carrie Coon tells me that in Season 3 “we have a greater appreciation for the absurdity of life,” adding, “I used to joke with [exec producer] Damon [Lindelof] that by the time we got to Season 3 we’d be making a sitcom, and maybe we have. And that’s all I’ll say about that.”

Question:You never answer any of my questions. Trying again! Any scoop on Quantico? — SMOR
Ausiello: SMOR, it’s your lucky day. Jake McLaughlin says that in the back half of Season 2, we’ll get the full story behind that incriminating murder video featuring Ryan, León and Dayana. “It is talked about, and you’ll find out why all of that happened,” he previews. “You’ll see how it happened.” Bonus scoop: The final moments of Monday’s episode answer one big question… and pose a bunch of other ones.

Question: Will Nick be reunited with Kelly and Adalind before the series Grimm ends? —Ronda
Ausiello: I can’t tell you that, but I can tell you that there’s someone small, blonde and very powerful who might not be so into that particular reunion happening.

Question: Do you have any spoilers involving Nick’s PTZD (Post-Traumatic Zombie Disorder) on Grimm? I hope this isn’t something that will just be dropped without explanation! —Tom
Ausiello: I wouldn’t hold your breath, Tom. First, because there’s so much current story to wrap up in the NBC drama’s final 13 episodes that there’s not much time to address stuff like that, and second, because (I assume) you aren’t suffering from PTZD, and holding your breath that long would be hazardous to your health. 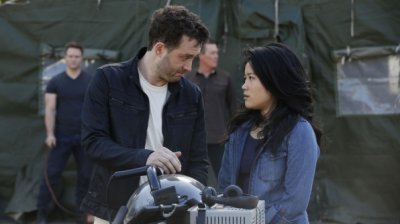 Question: Will we actually get to see Scorpion‘s Toby and Happy get married this season? —Marla
Ausiello: “We wouldn’t be a TV show without roadblocks,” notes Eddie Kaye Thomas. “But they’ve got some really good stuff planned for the end of the season. The last three episodes will be one long story. It’s something I knew we would eventually do, and it involves the Happy/Toby thing, and then the whole gang gets involved. It’s going to be very exciting.”

Question: Got any scoop on The Fosters? Is Callie going to have a new love interest? I don’t like AJ. —Luiz
Ausiello: Sorry, there’s no new guy in Callie’s life, but she and AJ are going to face plenty of challenges when the Freeform drama returns on Jan. 31, if that makes you feel any better. Aaron is “absolutely” still a source of tension for the couple, executive producer Joanna Johnson tells TVLine. Plus, “as Callie continues to obsessively pursue justice for Kyle, that also wears on her relationship with AJ.”

Question: Can you say something about the relationship between Emily and Alison during the last 10 episodes of Pretty Little Liars? Please, I need some spoilers. — Kate
Ausiello: “We’re going to have scenes together,” Shay Mitchell tells us of the farewell run, premiering Tuesday, April 18. “As far as what the outcome is… that’s the exciting part about all of this. It is the most romantic season, but Emily has also had a revolving door of many women, so it’s kind of a toss-up who she ends up with.”

Question: Can you tell us something about The 100 season 4? Maybe something Bellarke-related? — L. Lopez
Ausiello: I’m not promising fireworks or anything, but there’s a pretty nice moment between Bellamy and Clarke in the first few minutes of the season premiere, which picks up immediately after Clarke’s victory against ALIE. Let’s just say that a lot went down during that scuffle — and someone has a little gratitude they’d like to express.

Question: Anything on the final season of Reign? — Jen
Ausiello: I’m not sure what I can tell you without ending up like Lola, but hopefully this will suffice: Reign’s final season opens with a really fun scene that shows off a slightly different side of Queen Mary. Let’s just say things get pretty sweaty… and maybe a little violent.

Question: I’m up for anything on Supergirl. —Kayla
Ausiello: Kara “finds out in a very dramatic fashion that James is the Guardian,” Mehcad Brooks previews. But in Monday’s winter premiere, the Girl of Steel still has no clue that her pal is the crimefighter as the two battle it out… on the page. “I’m writing my article on how amazing the Guardian is and how he stopped the crime, and Kara’s writing her article about Supergirl,” Brooks shares. “We’re having a secret war. It’s just a little funny scene where both of us are trying to push our agendas.”

Question: Can you ask a Zoo cast member to describe Season 3 in four adjectives? —Miss Ellys
Ausiello: We can, and we did! James Wolk met your challenge with “incredibly exciting, all-new,” as the CBS summer series picks up with the season-ending, 10-year time jump. (“I think there was an adverb in there,” he admitted, “but we’ll just take it.”) Wolk also has this to offer for potential samplers: “You can tune in for Season 3 not having seen Seasons 1 or 2, and just jump into it.” 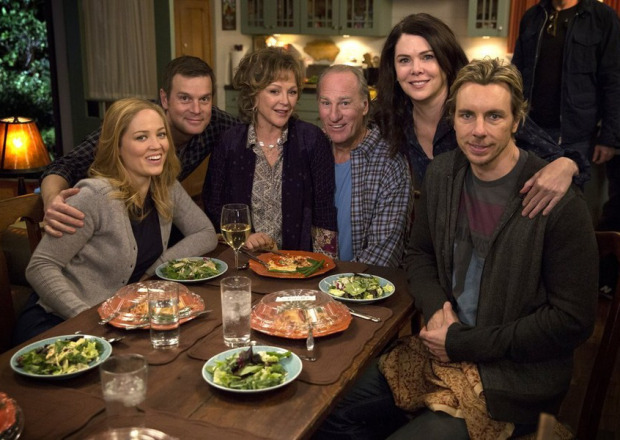 ♦ Parenthood revival update straight from NBC president Bob Greenblatt! Essentially, the exec confirms our earlier scoop that the network “talked about [doing] a Christmas movie, but we never really got that far down the road,” adding that series creator Jason Katims “is developing a pilot for us now — we love him. But I don’t see a reunion imminently. Although… you never know.”
♦ The Good Fight will examine the alt-right phenomenon during a Season 1 episode penned by Robert and Michelle King. The hour will feature a familiar-sounding ” gay conservative/libertarian who’s an intellectual gadfly, an articulate, over-educated trickster who regards politics as a mischievous game; he loves causing trouble and sowing discord among his enemies.”
♦ In case you were wondering, this is how I’m coping with a Trump presidency.