That had to hurt.

At the close of Brooklyn Nine-Nine‘s winter finale, Gina got hit by a bus — Barney Stinson-style — before those three infuriating words — “To Be Continued” — flashed across our screens. Meanwhile, Jake and Amy came to an important decision about their relationship. Let’s recap:

A prison van was overturned, allowing nine convicts to escape by foot. Jake and Amy led the subsequent manhunt, with the couple using their efforts to wage a bet: Already contemplating moving in together, they agreed that whoever apprehended the most escapees would get to keep their apartment, while the loser would have to forfeit their own. Jake eventually let Amy take credit for catching the ninth and final perp, George Jeselnik, and agreed to move in with her.

Moments later, Terry informed Jake and Amy that the man they thought was Jeselnik was actually the driver of the van. The real Jeselnik (played by Breaking Bad‘s Charles Baker, aka Skinny Pete) managed to get away, and as Jake would soon discover, Jeselnik once went by another name… 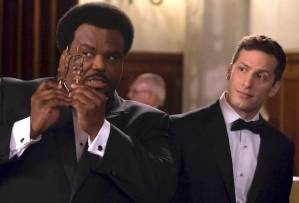 George Judy! As in, brother to Doug Judy, aka the Pontiac Bandit (recurring guest star Craig Robinson). After reading his file, Jake learned that the criminal-at-large grew up in the foster care system, and once lived with Doug’s family — that was, until he stole from his parents, burnt their house down and stole his copy of Phil Collins’ “No Jacket Required.” Now, the only person who wanted George behind bars more than Jake was Doug, so the two partnered up (and created a killer theme song!) to try and track him down, alongside a reluctant Captain Holt.

Their first attempt to catch George at an auction proved to be a bust, and George managed to get away with every car at the valet — including Holt’s beloved Gertie. They eventually caught up to George at an auto-body shop where Gertie was being stripped for parts, but he managed to get away again, only this time with Doug by his side. And while Holt was convinced he and Jake had just been duped by Doug, it was Doug who had duped George, gaining his trust so he could eventually get him in a room with Jake and Holt and knock him out. For his efforts, Doug was cleared of all of his crimes. As a token of his appreciation, Doug gifted Holt with a Gertie replica by the name of “Sexerella.”

Back at the precinct, Charles discovered that he was purposely being excluded from office group texts. After deleting his GIF keyboard, and doling out a crash course on text-messaging etiquette, Gina and Amy reluctantly agreed to let him on the chain.

Later on, Gina, Amy and Charles took a walk, during which Charles asked Gina to double check a message he intended to fire off to the group. After assuring him that he no longer needed her help, Gina went to cross the street, where she inexplicably stopped smack dab in the middle to read Charles’ incoming text. And after previously declaring that she’d rather get hit by a bus than receive one more text from the Property Brothers enthusiast, Gina got exactly what she wished for, and was suddenly hit by a bus going at full speed.

A few other thoughts:

* The first-half of the two-parter made great use of former Seattle Seahawks running back Marshawn Lynch as one of the two eyewitnesses. (He really loves his pico de gallo.)

* Between Terry embracing his “old age,” and November’s Terry-centric “Skyfire Cycle” episode, Terry Crews might just be the MVP of B99 Season 4.

What did you think of Brooklyn Nine-Nine‘s midseason closer? Grade it via our poll, then chime in below.