Need to catch up? Check out the previous Sherlock recap here.

We never thought we’d see another evil genius torture Sherlock like Moriarty did… but then again, no one can torture you quite like family.

Sherlock‘s Season 4 finale, “The Final Problem,” followed up on last week’s shocking arrival of Sherlock Holmes’ long-lost sister Eurus, revealing her to be a master manipulator who delights in toying with the emotions of her detective brother… and playing deadly games for her own amusement. But did she win out in the end? And if the rumors are true that this could be Sherlock‘s final season, was “The Final Problem” a satisfying series wrap-up?

Let’s pour a cup of tea and take a look at the highlights, shall we?

‘EXPERIMENT COMPLETE’ | First, a brief prelude: A young girl wakes up on a plane to see oxygen masks dangling from the ceiling. Everyone on the flight but her is knocked out cold — pilots and stewardesses included. The girl hears a phone ringing, and answers it. It’s Moriarty, who tells the girl: “Welcome to the Final Problem.” 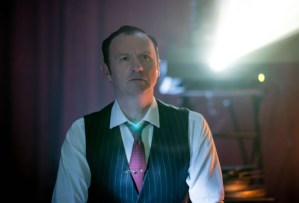 We’ll come back to that problem, but first, Mycroft is enjoying an old film in his home theater when suddenly, old home-movie footage of him and Sherlock as kids is spliced in, along with a message: “I’m back.” (Eurus, is that you?) Mycroft grabs a sword hidden inside an umbrella to defend himself, and shouts out, “Impossible… you can’t have got out!” After a creepy clown chases him, Mycroft realizes he’s locked in, and then… Sherlock appears: “Experiment complete. Conclusion: I have a sister.” (A little over-the-top, Sherlock, but it’ll do.)

John’s there, too, and tells Mycroft they knew he wouldn’t tell the truth “unless you were wetting yourself.” So back at the Baker Street flat, they grill Mycroft about Eurus, who Sherlock doesn’t remember at all. She was a year younger than Sherlock, Mycroft reveals. (“Middle child,” John sniffs. “Explains a lot.”) And Eurus was just as gifted as they are, Mycroft says: “an era-defining genius, beyond Newton.” But she was a troubled girl, too; they once found her cutting herself, and she explained, “I wanted to see how my muscles worked.”

In a childhood flashback, we see a young Sherlock playing among gravestones (of course) and laughing at the nonsensical dates on them. But he was devastated when his childhood dog Redbeard disappeared… and Eurus got blamed for the dog’s death. Even worse, she torched the family home and got sent away to an institution. Sherlock’s parents think she died in another fire, but Mycroft knows the truth: She’s alive, and being held in Sherrinford, a fortified, Alcatraz-like island prison built to “contain the uncontainables.”

Mycroft thinks it’s impossible that she escaped… but then a drone hovers into the flat, playing the indecipherable childhood song Eurus used to sing. Attached to the drone is a motion-detecting grenade; if Sherlock, John or Mycroft move an inch, the thing will blow in three seconds. Mrs. Hudson is oblivious downstairs, vacuuming and rocking out with headphones on. But Sherlock predicts the precise time she’ll be finished and out of harm’s way, and the three men make a plan to evacuate. With Sherlock saying “Good luck, boys,” he and John each leap out a window as the flat explodes, with a huge fireball at their backs. (That won’t end the complaints about Sherlock getting too James Bond-y, will it?) 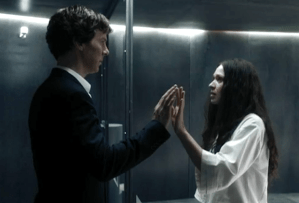 THE ISLAND OF DR. MORIARTY | They must’ve survived the blast just fine, because Sherlock and John are soon commandeering a boat and steering it towards Sherrinford. Mycroft’s with them, too, and fools the guards with an old sailor disguise while Sherlock infiltrates the prison looking for Eurus. And he finds her in an elaborate, glass-walled cell, playing violin. She wonders why she’s being held in there, finally concluding, “I’m too clever.” (Runs in the family!)

Sherlock demands to know how she escaped and posed as Culverton Smith’s daughter. But she’d rather toy with him, handing him the violin through a secure hatch. He tells her he plays the instrument, too, and she laughs: “I taught you. Don’t you remember?” She marvels at his lack of recall: “You still don’t know about Redbeard, do you? This is going to be such a good day.”

(Side note: How incredible is Sian Brooke as Eurus? Truly chilling. This show is filled with great performances, but Brooke’s really is a standout.)

Sherrinford’s warden tells John and Mycroft that Eurus has an incredible ability to convince people to do her bidding; she convinced one doctor to kill his family and himself. She doesn’t just talk to people, he says: “She reprograms them.” Meanwhile, Eurus is beckoning Sherlock to come closer, up to the glass wall between them. As he gets up there, he holds up his hand… and sees there’s no glass! As she knocks Sherlock to the ground and chokes him out, the warden reveals he’s been brain-washed by her, too. John tries to escape, but as he’s captured, he hears, “Did you miss me?” and sees on every TV… the face of Moriarty. Oh no? Oh yes.

LET’S PLAY A GAME | To the tune of Queen’s “I Want to Break Free,” Moriarty triumphantly emerges from a helicopter, posing and preening like a rock star. So he is alive? Well, not really; this is actually a flashback to five years ago. Mycroft has summoned Moriarty to Sherrinford as a Christmas present for Eurus. So what’s the gift, Moriarty asks? “Five minutes unsupervised conversation with you,” Mycroft replies. And when Moriarty meets Eurus, he asks her what gift she might have for him. She tells him: “Redbeard.” 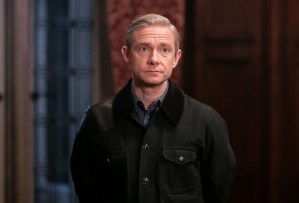 Back in the present: John wakes up to find he’s stuck in a room with Sherlock, Mycroft and the warden. They hear the little girl on the plane crying for help, and try to help her, but the connection is lost. Then Eurus pops up, revealing that Moriarty recorded lots of video messages before he died to toy with Sherlock. And she also reveals… she has the warden’s wife bound and gagged. Let the games begin!

In the first of a series of psychological torture chambers set up for Sherlock, Eurus threatens to kill the warden’s wife unless either John or Mycroft kill the warden. They refuse, and the warden kills himself, but that’s not enough for Eurus; she kills the wife anyway. Then she has a murder for Sherlock to solve, with three brothers as suspects, and she has all three brothers tied up and dangling over the rocks. Sherlock finds the culprit, but Eurus kills all three anyway. Then she has poor Molly Hooper’s flat rigged to explode unless Sherlock can get her to say “I love you.” He does, just in time. But Eurus warns him “the next one won’t be as easy.”

This one, she calls “Make Your Mind Up Time”: Sherlock has to choose between John and Mycroft, and kill the other. (We knew this was coming, right?) Mycroft gets mean and orders Sherlock to kill John, saying this “requires brain power, not sentiment.” But Sherlock deduces he’s just acting mean to make killing him easier. Sherlock points the gun at his brother and looks ready to pull the trigger… when he suddenly puts the barrel under his own chin. He counts down from ten, ready to blow his own head off. But he feels a needle at the back of his skull, and collapses before he can finish the job. He’s not getting out of this that easily. 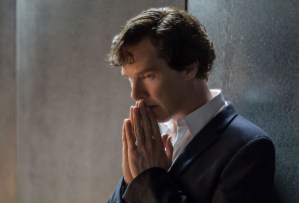 R.I.P., REDBEARD | Sherlock wakes up in a dark cell, and he’s talking with the girl on the plane again. John’s on the line, too, chained in some sort of hole with two feet of water in it. Sherlock discovers his cell is fake: He’s actually in front of his old family home… and John’s at the bottom of a well, with water quickly rushing in. As Eurus sings that childhood song again, Sherlock is haunted by visions of his old dog Redbeard. But that’s not exactly what happened, Eurus says: “You told yourself a better story.”

We learn the awful truth: Redbeard wasn’t a dog; he was Sherlock’s best friend, Trevor. They would play pirates together (with Trevor as Redbeard), and Eurus was jealous: “You were inseparable, and I wanted to play, too.” John finds Trevor’s bones at the bottom of the well… and Sherlock’s determined not to lose another best friend. He rushes over to the funny gravestones, and decodes a message in the seemingly random dates: “Help me, brother… seek my room.” He storms into his old family home, and finds Eurus huddled in a secret room. She was there the whole time — and she was the voice of the girl on the plane, too.

Sherlock comforts his sister, and she helps him fetch John out of the well by throwing down a rope. (Wasn’t he chained to the bottom, too, though?) As cops lead Eurus away in handcuffs, Sherlock laments that he can’t help her more. But John comforts him with his eternal bit of wisdom from last week: “It is what it is.” We see Mycroft and Sherlock break the news about Eurus to their parents: She’s catatonic, and won’t speak to anyone. Well, except for Sherlock.

He visits her once again in her glass cell, and gets out a violin to play for her. And she eventually comes around, fetching her own violin and playing with him. Finally, John receives another mysterious DVD, this one saying “Miss You.” It’s from Mary, who sums up their adventures in a way that makes this feel very much like a series finale: “Who you really are, it doesn’t matter. It’s all about the legend.” As we see flashes of Sherlock and John’s previous cases, and them taking care of Rosie together, Mary pays a final tribute to “the best and wisest men I have ever known… my Baker Street boys.” Sherlock and John run out of a building together, and… freeze-frame!

What did you think of the Sherlock finale? And did it feel like the last episode ever? Grade it in our poll below, and then join us in the comments.