Sherlock fans can expect a pair of blessed arrivals when we ring in 2017: the first full season of PBS/Masterpiece’s detective drama in three years… and a bundle of joy for John and Mary Watson as they welcome their first child.

“It creates a different dynamic,” co-creator Mark Gatiss tells TVLine about the addition of a tiny Watson, who debuts in the Season 4 premiere (Sunday, Jan. 1 at 9/8c). “Now I must stress, although we have a lot of fun with it, it doesn’t mean that Sherlock has become Two Men, a Woman and a Baby. But we do have fun with it, because there’s fun to be had.”

The fun comes from watching the hyper-analytical Sherlock trying to make sense of the utterly irrational actions of an infant. (See: his puzzled expression above.) “He treats it like a case,” Gatiss hints. “It’s a set of problems to be solved. But babies don’t respond to logic in the same way.”

Still, outside of the new-baby giggles, the trailer for Season 4 — with a stricken Sherlock looking utterly devastated — seems to promise a much darker ride than we’re used to. Gatiss assures us that “the show hasn’t changed into becoming some sort of ‘Scandi noir,’ Stringberg-ian tragedy. It’s full of laughs, still. But it is a darker season, in many respects.”

That darkness is provided by Season 4’s villains, including Emmy nominee Toby Jones (The Girl) as infamous Holmes baddie Culverton Smith — and the apparent return of Andrew Scott as Sherlock’s nemesis Moriarty. Yes, the Moriarty who died back in Season 2, but never seems to go away. “He is dead,” Gatiss insists. “We’ve said this many times. No one ever believes us. But he is dead.” So how does he end up taunting Sherlock via video this season, then? “Maybe he’s a YouTuber,” Gatiss jokes. “That’s probably the future of international crime. How many followers does Moriarty have?”

And how many more seasons does Sherlock have? Star Benedict Cumberbatch has already hinted that Season 4 might be the last, which isn’t a surprise, considering the busy film schedules of Cumberbatch and co-star Martin Freeman. And the Season 4 finale is titled “The Final Problem,” taking its title from the Arthur Conan Doyle story where he originally killed off the Sherlock Holmes character. But of course, as Gatiss points out, “‘The Final Problem’ was then followed by another 40 stories.”

Gatiss says “we honestly don’t know” if this season will be the last. “These three [episodes], we’ve very, very pleased with them. And everybody’s very keen to carry on. It’s just genuinely difficult to schedule everyone’s diaries. It was a nightmare to schedule this season… and that’s not going to go away. I mean, the success of Doctor Strange is not going to make Benedict short of work.” 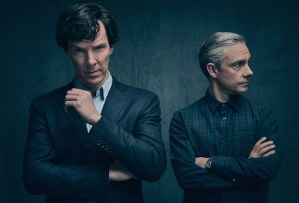 Calling Sherlock “an extraordinary gift,” he says that “we certainly don’t want to wave goodbye to something like that lightly.” But he adds that “there is a great precedent for leaving well alone. [The classic UK sitcom] Fawlty Towers is twelve episodes, with four years apart. And it’s perfect.”

So could we see Sherlock and Watson reunite a few years down the road? Gatiss digs back into Sherlock history for a reference: “Right at the beginning, we said, wouldn’t it be fun — because we start with the first meeting, which is very rarely dramatized — if we actually ended up with them at the same age as Basil Rathbone and Nigel Bruce? That would be a really interesting place to be with Benedict and Martin, having started so early in their careers as young men.”

Rathbone and Bruce played Holmes and Watson together in 14 films in the 1930s and ’40s; Rathbone was 54 years old when the final film was released. Cumberbatch is currently 40. So that gives us at least another decade and a half for this incarnation of Sherlock, right? Don’t put that deerstalker cap in storage just yet.