Well, co-creator Steven Moffat called Sunday’s Sherlock “the darkest one we’ve ever done”… and he wasn’t kidding, was he?

Season 4’s second episode, “The Lying Detective,” got incredibly grim at times, thanks to philanthropist-turned-killer Culverton Smith, played by Toby Jones. But it also gave us a much-needed truce between Sherlock and John after last week’s unpleasantness… and a last-minute twist that could have huge implications for the legendary sleuth going forward.

Let’s take a closer look at what transpired in “The Lying Detective”:

THE GHOST OF YOU LINGERS | The episode opens with John in therapy, short on sleep and blaming himself for not taking good enough care of new baby Rosie after Mary’s death: “I’m letting my daughter down. How is that OK?” We soon learn he has someone else to tell his problems to: the ghost of Mary, who follows him everywhere and serves as a sounding-board. He won’t tell the therapist about Ghost Mary… and he doesn’t know what’s become of Sherlock, who’s been holed up in his flat for weeks.

John’s right: Sherlock’s a mess, sporting some ragged stubble… and on the needle once again. (We spot a syringe lying nearby.) But he perks up when a new case comes his way in the form of Faith, Culverton Smith’s daughter. Culverton is a famous entrepreneur and beloved in the community, but he has a dark side. We see him dose his closest confidants, Faith included, with a memory-wiping drug and confess: “I need to kill someone.” Her memory is hazy, so Faith turns to Sherlock to find out exactly who her father needs to kill.

Sherlock intends to send Faith away, saying the case is “way too weird for me,” but stops himself when he deduces Faith has a gun in her handbag and intends to take her own life. Instead, he takes her out to get some chips and talk. She thinks her father’s confession was followed by one word, which means the person he intends to kill is known on a first-name basis. But later, Sherlock pieces it together: Culverton actually said, “I need to kill someone… anyone.” In short, one of Britain’s most powerful men is a serial killer. 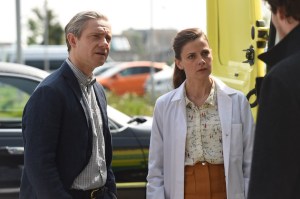 PASS THE CEREAL SERIAL | Sherlock gets even more manic than usual while investigating Culverton, wildly quoting Shakespeare’s Henry V and waving a gun around the flat, almost blowing poor Mrs. Hudson’s head off. So Mrs. Hudson turns to John for help, screaming up to his therapist’s office in a sleek sports car (what? She can afford it) and pleading for him to reconnect with Sherlock. When he agrees, he learns that the little old lady actually got Sherlock’s gun away from him and forced him into the trunk of her sports car: “You’re not my first smackhead, Sherlock Holmes!” Go, Mrs. Hudson!

Good timing, too, because Culverton Smith summons Sherlock and John for a meeting. Sherlock has publically accused Culverton of being a serial killer, but the philanthropist greets Sherlock with a warm hug when they meet. What the…? Actually, Culverton turned Sherlock’s accusation into a PR ploy for a breakfast cereal. He even shoots an ad, grinning, “I’m a cereal killer!” (Groan.)

Sherlock grumbles that Culverton is “hiding in plain sight,” and reveals that when he hugged the villain, he nicked his cell phone and sent a number of texts on his behalf. (That’ll come into play later.) But first, Culverton takes Sherlock and John to his hospital’s pediatric ward, taunting Sherlock in front of the kids that a smart, rich serial killer couldn’t be stopped: “You only catch the dumb ones.” Well, we’ll see about that… 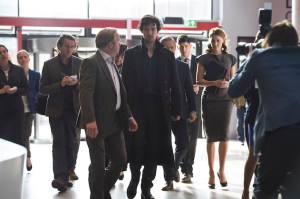 ‘MY FAVORITE ROOM’ | After the pediatric ward, Culverton leads Sherlock and John down to the hospital’s morgue (his “favorite room”), where he morbidly plays with the dead bodies: “They’re so pliable.” After offhandedly stating that a hospital would be the perfect front for a serial killer, Culverton points out how unstable a clearly jonesing Sherlock is, saying he’s “off his tits on drugs” to discredit his accusations.

But Sherlock’s texts are about to come back into play. He tells the villain he texted Culverton’s daughter Faith with a confession. And Faith does arrive at the morgue… but it’s a different woman than the one Sherlock spent the night with. Sherlock is baffled — that’s strange to see, isn’t it? — while Culverton explodes with creepy laughter. Sherlock grabs a scalpel and lunges at Culverton, shouting “Stop laughing at me!”

John stops him, though, before he can reach Culverton, punching Sherlock and screaming at him, “Is this a bloody game?” He has to be pulled away from Sherlock, who doesn’t fight back: “Let him do what he wants. He’s entitled… I killed his wife.” To which John says: “Yes, you did.” (Ouch.) Sherlock is subdued and placed in a hospital bed, while Culverton laughs the whole event off on TV, saying he bears Sherlock no ill will: “I might even move him to my favorite room.”

STICK IT TO HIM | John visits a sleeping Sherlock in the hospital, but insists, “I’m just in to say goodbye.” He does leave a parting gift, though: his old walking stick. And in a conversation with Mycroft, John (egged on by Mary’s ghost) notices that Mycroft slipped up and mentioned the possibility of… a third brother. There’s another Holmes boy out there? God help us all.

Meanwhile, Culverton sits down next to Sherlock’s bed, surgical gloves on. He looks ready to kill, but Sherlock beats him to the punch: “I want you to kill me.” He even tells Culverton how to up the dosage on his meds to finish him off, but that’s not enough for the evil Culverton: “Killing human beings… it just makes me incredibly happy.” Impatient with the drugs, Culverton starts to suffocate Sherlock with his bare hands, demanding that he “maintain eye contact…. I want to watch it happen.”

But he’s stopped just in time… by John! Remember that video Mary left for Sherlock last week? John found it, and realized she instructed Sherlock to “save John Watson” by getting himself into danger: “Go to hell, Sherlock. Go right into hell and make it look like you mean it.” And it worked! Sherlock wryly adds that the drug Culverton pumped him full of was merely saline.

Culverton still denies confessing, though. In fact, he removed the three recording devices Sherlock had hidden in his coat. But Sherlock just smiles: “People always give up after three.” A fourth recording device was hidden inside… John’s cane! And once caught, Culverton seems happy to confess his crimes to Lestrade: “I didn’t realizing confessing would be so enjoyable. I should’ve done it sooner!” 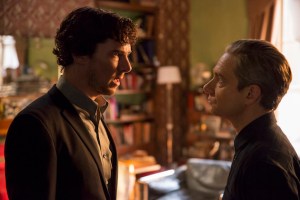 SIBLING REVEAL-RY | With the Culverton case wrapped up, Sherlock and John manage to settle their differences. John says he’s not OK: “I’m never going to be OK. It is what it is. And what it is, is s–t.” But he understands that Sherlock didn’t kill Mary… and he even confesses to her ghost about the infidelity we saw last week. It was only texting, but he still feels unworthy of her: “Who you thought I was… is the man I want to be.” Ghost Mary forgives him, though, telling him to “get the hell on with it.”

One more final twist, though: John’s back at his therapist, saying things are better these days, and the therapist brings up the idea of a third Holmes brother. But how would she know about that? “Maybe Sherlock told me,” she says. “We spent the night together.” Set your faces to stunned: John’s therapist is also… the fake Faith Sherlock met! What’s more: As Sherlock looks again at Faith’s note and sees the classic “Miss Me?” in invisible ink — God, this show uses that phrase a lot! — we learn the therapist is also… the woman from the bus John’s been text-cheating with!

And that’s not all, folks: As the therapist reveals she’s wearing a wig and contacts, she pulls a gun on John and introduces herself as Eurus. It’s Greek, she says, and means “the east wind.” But it is a weird name, she admits, kind of like Mycroft… or Sherlock. Yes, Sherlock doesn’t have another brother; he has a sister. And holding John at gunpoint, she says he’s “making a funny face… I think I’ll put a hole on it.” Gunshot! And cut to black.

What did you think of this week’s Sherlock… and the twist of Sherlock’s sister? Give us your take in the comments.