Need to catch up? Check out the previous Grimm recap here.

Has anyone checked to make sure Zauberbiests aren’t part Teflon? Because, man, nothing sticks to Grimm‘s slippery Sean Renard.

Though the corrupt politician/police chief finds himself in a very bad way in this week’s episode — falsely accused of the murder of his campaign manager and sometime lover — he somehow ends the hour as a free man, striding confidently down the courthouse steps and calling for someone to bring him Nick Burkhardt.

Sure, there’s that pesky matter of his having disturbing visions about killing Meisner. Still, all in all? Not a bad bounce-back for His Honor.

Read on for the fall and rise of Sean Renard, as well as other highlights from “Trust Me Knot.”

CUFF ‘EM! | No time has passed since the last episode, which means that the Portland Police Department is preparing to use all of its resources to extract Nick from Bud’s repair shop. Monroe thinks this is the perfect moment to blurt out his good news: “Rosalee’s pregnant!” Nick answers with the Nick-iest response ever: “That’s great news. I’m so sorry I dragged you guys into this. Everybody into the back now!”

But he need not panic, because Hank and Wu roll up outside just as Renard is about to give the SWAT (or, in this case, SERT) team the go-ahead. The pair arrest their captain for Rachel’s death, cuffing him and taking him back to the station’s jail.

But the police move in, anyway, after Renard’s exit. Good thing Nick still has the stick on him, because the mystical object knocks down every officer in its immediate vicinity. Well, that’s something new. “Maybe they shouldn’t have tried to take that from you,” Eve notes.

The gang escapes by distracting the cops and then stealing a SWAT truck; Nick sends Monroe and Rosalee back to the Spice Shop before taking the back entrance to the tunnels — his last safe haven — with Eve, Trubel and Bud.

WELL, THAT’S NEW | While they’re there, Eve notes that she feels “different, and the same. Like there’s two of me. It’s very confusing.” But she pushes that aside to suggest that Nick put away the stick, because “we need to find out where its power comes from before it kills one of us.” He’s reluctant, but he eventually places the strange piece of wood back in its box. He also relents and lets Eve and Trubel take the cloth used to wrap the stick over to Rosalee’s for further examination.

But soon after the ladies leave, Nick just wants to touch his stick again. (Not a euphemism.) When he grabs it, everything else seems to fade into background noise. (Still not a euphemism.) And when he finally takes his hands off of it, he’s sweating and shaking. (Still no.) 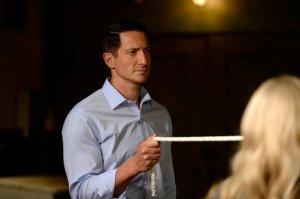 RENARD RELEASED | Meanwhile, Adalind drops the kids at the Spice Shop and grudgingly heeds Renard’s call from the pokey. When she arrives, he demands that she serve as his alibi for the night Rachel died. “You want me to be your alibi for a murder you didn’t commit because you were murdering the person who actually was your alibi?” she asks, incredulous. “Basically, yeah,” he replies. But Ad refuses to purger herself. “Good luck with the grand jury,” she tosses out as she leaves.

However, things become even more complicated when Nick comes up with a plan. He needs Renard to call off the cops and reinstate him on the force. Renard needs an alibi. But neither has cause to trust the other. So Adalind performs a Trust Me Knot between the two men, issuing a blood oath that brings death to the person who doesn’t hold up his end of the bargain. In exchange for Adalind testifying to the grand jury that she was with Sean on the night in question, Mr. Mayor-Elect will drop his precinct-wide pursuit of Burkhardt.

But the spell turns out not to matter: The grand jury is rigged — the judge and lawyers are all Black Claw-loyal Wesen — and Renard is cleared before Adalind is called to the stand. This means the Trust Me Knot “is off,” Renard tells Nick, Hank and Wu, all smug. “I’ll expect your resignations on my desk in the morning.” Later, he mets with the corrupt judge and lawyers and promises to “clean house in Portland” once his mayoral administration begins. (If it turns out to be as effective as another notable politician’s plan to “drain the swamp,” I’ll forgive Nick & Co. if they’re not exactly quaking in their Urban Farm Store boots.)

You can act all confident, Sean, but we know what the Grimm doesn’t: While in lockup, you thought you saw a bullet, and then a gun, materialize in the cell with you. But when you had a minor freakout flashback to killing Meisner, they disappeared. Guilty conscience, much?

AND THE CHILD SHALL LEAD THEM | At the shop, Monroe is just a few sentences into his riveting lecture on the origins of cinnamon when Diana starts pulling vials from the shelves and making them float in the air… with her mind. Rosalee comes into the store, sees half her inventory hovering precariously in the air, and is all, “Awesome! Now let’s put things back on the shelf, hmm?”

Things get even weirder after Nick and the rest of the gang show up: Diana uses her Violet Vision to look at the stick’s cloth, and she can see everything Eve did and a LOT more. She draws the symbols she sees, and Rosalee gets to work researching them.

Then Trubel receives a call from Hadrian’s Wall: They’re relocating her, and she wants Nick to come. But he refuses, and she takes off, warning him to be alive the next time she sees him.