In case you’re keeping score at home, that’s misery: 2, happy holidays: 0 in the This Is Us-verse.

The series’ fall finale spends most of the hour lulling us into a false sense that all will indeed be merry and bright for the Pearsons this Christmas. Old hurts will be smoothed over. New loves will bloom like poinsettias. Painful inevitabilities will seem far-off and unimportant when bathed in the warm glow of familial love.

After all, it’s Dec. 24 and, as Rebecca reminds us throughout the episode, “Nothing bad happens on Christmas Eve.” And while that certainly holds true in the flashbacks — when two successful surgeries make the family’s holiday that much more meaningful — it’s the coldest of comforts when someone at the Pearson Christmas shindig falls suddenly and gravely ill.

Read on for the highlights of “Last Christmas.” 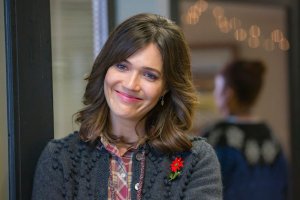 A CHANGE OF CHRISTMAS PLANS | On a back-in-the-day Christmas Eve, we watch Jack and Rebecca put some presents under the tree while Kate complains that her belly hurts. Rebecca is sure the pain is the result of overindulging in cookies, but it turns out that the kiddo’s got appendicitis and needs immediate surgery.

The kids are understandably worried — especially poor Kevin — and to assuage their fear, Rebecca does a bit of mom improvisation. She breaks a sprig off one of the hospital Christmas trees and says it’s covered in holiday magic. Then she puts it in Kate’s hand and promises that “Nothing bad ever happens on Christmas Eve.” Still, Kevin doesn’t look comforted, and he holds onto his twin’s gurney until the very last moment she’s wheeled into the operating room.

While Rebecca is getting snacks from the vending machine and preparing to settle in for a long wait, she hears a familiar voice: It’s Dr. K, the obstetrician who delivered Kevin and Kate in the series premiere. But he’s a patient this time: A car crash left him with a slow hemorrhage between his heart and his lung, he explains, and there’s a chance he might not survive the surgery necessary to repair the damage.

ALL’S WELL THAT ENDS WELL | When Rebecca hears that the doc’s family is all out of state, she decides that she, Jack and the boys will serve as his relatives for the evening. The doctor meets Randall, who buys him a snow globe in the gift shop and thanks him for suggesting that the Pearsons adopt him all those years ago. “The only thing I did that day was nudge a man in a direction he already wanted to go,” the avuncular OB says, adding that Randall should try to pay his parents’ kindness forward someday.

Meanwhile, Kevin is wandering around the place, worried about his sister and asking hospital staff about the comparative benefits of Christianity and Judaism. (Side note: This is, in no way, an exaggeration. For the record, the nurse standing near the menorah and nativity scene he’s contemplating answers, “They all get the job done just fine.” It doesn’t seem to make him feel any better.)

By the end of the night, both Kate and Dr. K come through surgery OK. And Rebecca and Jack, sitting in uncomfortable chairs in the doc’s hospital room while the boys sleep on their laps, exchange a relieved smile. 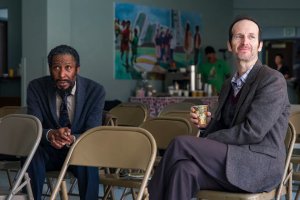 HELLO, LOVER | I hope you enjoyed that heartwarming tale, because the present-day Pearson holiday saga is less Miracle on 34th Street, more the George’s-life-is-crap-and-we’re-not-even-to-the-midpoint-yet part of It’s a Wonderful Life. Let’s start with William. Randall’s biodad speaks at a 12-step meeting, thanking everyone there for helping him get to the good place he’s at today. “I did not expect God’s grace, but now I had to open myself to the pain of it to feel the joy of it,” he says. But when a man sitting a few rows behind him talks next, it quickly becomes clear that he’s throwing major shade William’s way.

The man’s name is Jesse, he’s played by Denis O’Hare, and he’s the boyfriend on whom William ghosted when Randall came calling. William kinda knew that his flame would be at the meeting; “I came here tonight to tell you I’m sorry,” he says, adding that he wanted to spare Jesse the pain of having to watch his terminal illness play out. “William Hill, I loved you, and you left,” Jesse replies. “Now, I’d like you to spend whatever time you have left remaining together. Would you?”

‘THE BOAT IS SADNESS’ | At Randall’s company’s holiday party, Beth is a little incensed to learn that her husband bought a boat from one of his co-workers. He maintains it’s just a boat, but she knows he’s bummed about his fight with Rebecca and the fact that most of his family has cancelled on coming for Christmas. “This boat is not a boat, Randall. This boat is sadness,” Beth shoots back, and I once again marvel at Susan Kelechi Watson’s timing. While Randall’s boss makes a big show of throwing everyone’s bonus checks in the air and letting them flutter to the floor (question for the fancy readers who work in finance: Is this normal? It does not seem normal.), Beth exhorts her husband to find his colleague, Andy, and return the seafaring vessel.

When Randall locates Andy on the roof at the party, it’s quickly evident that the other man is seriously considering jumping to his death. The short version: Andy banged someone else who works at the firm; when his wife found out, she filed for divorce. And he’s made some risky trades that didn’t pay off this year, meaning he’s lost a lot of money for a bunch of people. As he sadly tells Randall, who tentatively approaches him, his life is “broken. I broke it. For no reason.”

Randall tries to get his bereft co-worker to see that he has an obligation to his daughter, Chloe, to live long enough for her to forgive him for his transgressions. “If you love Chloe hard, she will love you back. That’s the way kids work,” Randall says, tears in his eyes. “And she will forgive you, Andy, but not if she can’t… it is your job as her father to stay here until she is ready.”

Just then, Beth enters the scene and can’t figure out why her normally chill husband is suddenly yelling at her to leave them alone and go back into the party. When Randall turns back to Andy, he’s gone — and Randall (and I) think that he jumped. But then Randall sees Andy walking among the other employees inside, and he nearly passes out with relief, hugging Beth close and saying he wants to go home to their daughters. 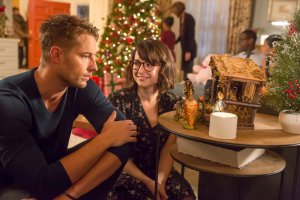 FESTIVAL OF SLIGHTS | Olivia hasn’t been seen since her visit to Kevin’s cabin, which means the play is about to be cancelled. I’m sorry, did I miss the episode where we found out she’s filthy stinking rich and can just up and leave a paying gig? Because there are SO many stage actors in that situation in New York City. Sloane, the playwright Kevin slept with last episode, is mad about the whole situation; as retribution, she demands that Kevin come to Hanukkah dinner with her disapproving family, because she kinda told them she was dating The Manny. He’s actually fine with it, because “We did that storyline twice on the show.” (Heh.)

So Kevin goes home with her and is his charming-if-slightly-dim self; my favorite part of the dinner is how engaged he is while Slone tells the kids the story behind the holiday. He’s also super inspired by the Maccabees, because when she’s done, he’s got an idea: “Let’s put this play on ourselves!” He thinks she should take Olivia’s part, and she only resists for a few moments before happily agreeing. They hug. “This actually happened once on The Manny,” he says, “but you’ve gotta be careful, because we were engaged by the end of Season 2.”

THOSE BARIATRIC BLUES | Rebecca accompanies Kate to see the doctor about her stomach-reduction surgery, but she’s a little judgey about both the procedure (which she deems too dangerous) and Kate’s revelation that she’s been on Prozac (“I’m not always jolly!” Kate replies huffily).

Rebecca breaks the uncomfortable silence in the car on the way home. “Did I do this to you?” she asks, and I give Mandy Moore a lot of credit for all the guilt, disappointment and sadness she stuffs into those six words. “I don’t know,” Kate says, equally hurt. She explains that she feels alone in her decision to go under the knife. “I want one person to tell me that I’m doing the right thing.” I never thought I’d say this, but thank GOD for Miguel, whose doltishness while setting up the Christmas lights on the lawn breaks the tension in the scene.

THE GHOST OF CHRISTMAS? | When Randall and Beth return home, they plan on a quiet night with the girls before Santa comes. But then Kevin and Sloane stop by, and so do Miguel, Kate and Rebecca and William and Jesse. And then Toby (!) shows up, wearing a fuzzy red hat and making a romantic declaration to a gobsmacked Kate: “I am here to take the first steps in overcoming our insanity. One last time. For both of us. Because it’s Christmas, and because we’re good together.” Personally, I am not down with the guy Kate broke up with suddenly showing up at a family gathering uninvited, but Kate seems enchanted as he explains that he’s back on the diet — “not for you, for me. But also for you.” Pretty soon they’re kissing and sneaking upstairs so he can stir her hot cocoa with his candy cane, if you catch my (snow) drift.

Downstairs, William and Jesse are cozily messing around on the piano when Randall’s older daughter serves him some figgy realtalk pudding: “Dad, Grandpa’s gay,” Tess says, matter-of-factly. “Or at least, bi.” Randall soaks this in and then makes the same high-pitched laugh he did when he said “What’s happening?!” in the premiere.

Everyone gets along. They sing. They eat. They cavort. They kiss under mistletoe. Yay! God bless us every— wait, what’s going on with Toby? He’s all sweaty and gray-looking, and when he stands up to help Beth clear some dishes from the living room, he collapses. Next thing we know, he’s flatlining on the operating table in a surgical suite.

Hey, all of you Toby-haters? Looks like you might’ve gotten your Christmas wish.