Westworld‘s Season 1 finale Sunday answered a bunch of questions — What is at the center of the maze? What is the Man in Black’s true identity? How did Arnold really die? — at the same time it raised a bunch of new ones. Chief among them: What will a theme park inhabited by rebelling robots — and devoid of its creator — look like when the series returns for Season 2?

For some answers, we went straight the source: Series bosses Jonathan “Jonah” Nolan and Lisa Joy. The married executive producers offered answers both definitive (one character is absolutely “not a host,” Joy promises) and nebulous (you try nailing Nolan down on how many sister parks Westworld has).

Read on for their comments — including a discussion of those pesky flies.

TVLINE | We spoke with Jeffrey Wright last week, and he was talking about how all of the show’s revelations have been on the table since the beginning. And the show has been great about doling out clues and hints in measured doses. But it made me wonder: At any level — script, production, editing — did you ever see something and cut it because it was too soon for that information to get out?
NOLAN | It was definitely a give and take in the edit suite in terms of, “OK, how far do we go here?” and knowing that you’re creating a show for a larger audience that maybe isn’t going online and digging around and doing the math on it and just wants to watch the show and let it roll over them a little bit. You’re layering things in for that audience and for the folks who are doing the deep math on it. We balanced it a little bit. 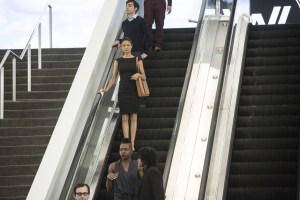 TVLINE | Jonah, you directed the finale as well as the pilot. Why was it important to have an even more hands-on role for these two episodes, in particular?
NOLAN | Part of the reason I engaged with the project in the first place [was that] I was very excited to collaborate with Lisa, very excited to also get a chance to build not just their characters and the stories but also build the look and feel of the entire world. I love the collaborative aspect of television. I’ve worked with some incredibly talented directors in my career and some incredibly talented directors on this series. But the opportunity to get in there swinging from the beginning to build, “How do these two worlds, what do they look like, how do they feel?” To have an unmediated relationship with the actors from the beginning about tone and all the really subtle things we wanted to layer in there, it really felt like the best way to try to build this world.

TVLINE | The hosts that we saw coming out of the woods at the end of the episode: Can we assume that they’re not all as evolved as Dolores is, that they’re at various points on the path to consciousness?
JOY | Absolutely. The hosts that came out of the woods at the end were the hosts that had been stored in cold storage, so we know that those hosts, having been retired, had the drill bit up the nose. You can expect that they certainly aren’t as immediately present as Dolores is right now. 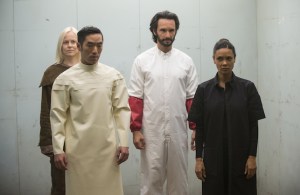 TVLINE | We see Armistice in that sequence during the credits. Will she have a (pardon the pun) more fleshed-out role in Season 2?
NOLAN | Yeah, without a doubt. We’re so grateful and excited that the audience has invested in this season, in which the hosts have very little autonomy and very little ability to act out, to do the things they want to do or even comprehend what they want to do. All with an eye toward building toward second and subsequent seasons where the hosts finally have control over their actions and kick a little a–.

TVLINE | The finale went to some lengths to show that Felix wasn’t a host. Follow-up: Is Felix a host?
JOY | He’s not a host. One of the funny things about it is, he’s so kind-hearted in a way that it makes him, in a show where we really explore the dark side of humanity — just as Maeve said, he looks like a terrible human, almost in some ways inhuman — but it takes a remarkable character and a remarkable person in this show and in life to see something terrible happening en mass and take their own little stand against it. And that’s exactly what he’s done. He’s just a really heroic figure.

TVLINE | We see Felix and Maeve run through Samurai World or Shogun World or whatever it’s actually called — the backstage area for another park. In his note to her, we see that her daughter is in Park 1… indicating that there are multiple worlds. What can you tell me about the concept of multiple Worlds?
NOLAN | Lisa and I embarked on this with a feeling that we’d need a plan, we’d need a beginning, a middle and an end to embark on something like this. We didn’t want to do a series that was really popular and we just kept doing it and doing it and ran out of ideas. We wanted to tell the story of the origin of a new species and the new messiness and ambition that would entail.

We wanted the show to change, season on season, sometimes in terms of the characters you’re looking at, but with many familiar faces along the way. And see how their journey, the hosts’ journey, shifts and changes as they understand more of the world around them. At the same time, the title of the series and our interest in the Western aspect of it, and what that means and why that genre was so durable and so evocative for so long, for us means that there’s always a connection to that place and that key of storytelling. Hopefully the ambition of the story and the scope of the story grows season on season, but you never quite forget where it started.

TVLINE | Last question: the flies. I need something! What can you tell me about the flies?!
NOLAN | Well, we really enjoyed working with our fly wrangler. [Laughs]

TVLINE | Will we get more on the flies next season?
JOY | Well, the flies were always the canary in the coal mine of where the story was going, because they were the one not-programmed creature in the park. So that tiny little slap that Dolores did at the beginning of the season was a harbinger of things to come. Now, in Season 2, now that the gloves are off, we’re gonna see a lot of flies — and they’re not necessarily gonna be actual flies.