When Marshall Herskovitz and Ed Zwick were first approached about taking over showrunning duties at Nashville, “I had never watched it,” Herskovitz says, chuckling sheepishly.

He quickly caught up on the country-music drama, which will have its official Season 5 premiere on CMT in January after ABC cancelled it in May. The verdict? “I felt that this was potentially an amazing show,” the executive producer tells TVLine — but the action unfolded way too quickly.

“It followed a template which is a kind of storytelling that I don’t know how to do, meaning a high amount of incidents, where things happen to people at a very fast rate,” he says. “And by the way, this is really a staple of modern network television. You see it on ABC shows all the time. It’s something that audiences really like — but it’s nothing that I know how to do.”

Herskovitz and Zwick are best known for dramas like thirtysomething, My So-Called Life and Once and Again, dramas that are “absolutely minimalist on plot and all about the very nuanced interactions between people,” aka not reliant on car crashes/covered-up accidental deaths/faked miscarriages and the like.

“So the question was… could we create some kind of hybrid where we brought what we do to Nashville without sort of turning it into a Nashvillesomething?” he continues, laughing. “We didn’t want to ruin what was great about the show, but we had to do storytelling the way we understand it.”

And that version of Nashville is the one that that fans will see in January (or on Dec. 15, when CMT will air a sneak peek of the two-hour premiere’s first half). “The tradeoff is less adrenaline, more emotion,” Herskovitz says. “We have longer scenes, deeper scenes, more opportunity for true relationships between these people to fulfill themselves, to play themselves out. And I think it’s much more emotionally satisfying this way.”

Though he declined to talk character specifics, the EP offered these nuggets in advance of the drama’s rhinestone-studded return: 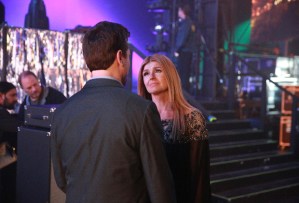 * When asked about Connie Britton’s reported departure from Nashville after the season’s 10th episode, Herskovitz good-naturedly reiterated, “I just can’t talk about any kind of a storyline. I think it’s better if I just don’t say anything… I mean, I can say that Hayden [Panettiere] is back, because everyone knows she’s back. But I can’t really talk about anything else from a story concept. So sorry.”

* Look for Deacon to put down his dukes this season. “I find Charles Esten to be just an astonishingly great actor, and I feel what we’ve been able to do with Chip and with Deacon is, again, go deeper into his character,” Herskovitz previews. “So the issue of his sobriety, or the issue of whether he punches people, is not going to be where our focus is going to be.”

* Herskovitz praised Will Chase, who was cut as a series regular in June but who will appear in the new season, as being “really gracious” about understanding the show’s needs. “One of the decisions we made when we first came in was that there were simply too many characters. If we were trying to do less in each episode, there’s just simple math here, do you know what I mean?” The EP added that the show will bring Chase’s Luke back again when needed. “We had to make some draconian decisions early on, and it had nothing to do with the performers. It had everything to do with where those characters fit into the overall storyline of the show. That’s all.”

Nashville fans, how are you feeling about the upcoming season? Hit the comments and let us know!