An intimidated time-traveler, a levitating E.T. and a fanboy vigilante will all come together to fight aliens during The CW’s upcoming crossover between Supergirl, The Flash, Arrow and Legends of Tomorrow (kicking off Monday at 8/7c).

While visiting the shows’ Vancouver sets, TVLine got scoop from the stars about their characters’ reactions to the out-of-this-world Girl of Steel, Stein and Jax’s secret and more.

HOW BIG IS IT? | “It’s not twice as large, it’s like 32 times [bigger],” Arrow star Stephen Amell says of the four-way event, which required some scheduling heroics. “Our first A.D., Ken Shane, handed me this big piece of paper that was just five straight weeks of where I was going each day,” Amell recalls. “It was hard work. I didn’t have a day off, but there was a spirit of teamwork this year that made it palatable.”

GIRL MEETS (OUR) WORLD | Considering he nearly lost his fries when he first met The Flash, it’s no surprise that Diggle’s interaction with Supergirl is equally entertaining. “I always think it’s fun when Diggle gets to go to these other worlds,” his portrayer David Ramsey says. “He’s really a nuts-and-bolts kind of guy, and metahumans kind of freak him out a bit. So I really wanted to see this whole Diggle/Supergirl reaction.”

Sara Lance, meanwhile, has a crush on the Girl of Steel, as executive producer Andrew Kreisberg previously teased. But the Legends’ captain is also “intimidated by her, at first, because she’s used to being the bad bitch in town,” Caity Lotz previews. “Then all of a sudden comes this alien girl who can, like, levitate and burn things with her eyes. I think [Sara needs to get] over that intimidation and go, ‘OK, I see you.’ She’s impressed by her.”

Someone else who will have a memorable response to the Maiden of Might: Team Arrow’s terrific tech whiz. “You’ll definitely see Curtis go through his paces like any fanboy would,” actor Echo Kellum describes. 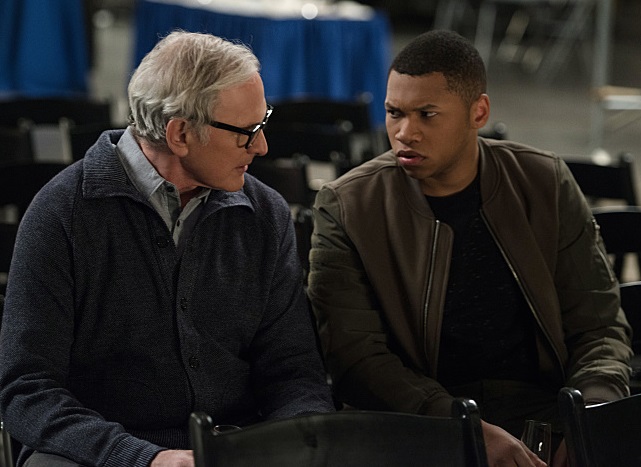 BACK TO THE FUTURE | Remember the message that Legends‘ Martin and Jax discovered from a circa 2056 Barry Allen? During the crossover it will get back to the source, when the present-day speedster “finds out” about the voicemail he will one day send, Victor Garber reveals.

SUPERFRIENDS, FOREVER | With the world under attack from the alien race known as the Dominators, there isn’t much time for newbies like Vixen and Citizen Steel to get to know their new peers. “But then at the end of our episode [airing Thursday], it’s really wonderful,” Legends newcomer Maisie Richardson-Sellers shares, “because you see everyone together, sort of celebrating in a sense” — what, you doubted the heroes would triumph? — “and that’s when they begin to chat a bit.” (Suggested conversation starter: How long are you going to nap now that this is all over?)

What are you most excited to see in #SuperFlarrowOfTomorrow?