As Negan and the Saviors pillaged Alexandria in Sunday’s The Walking Dead, Gabriel tried to cheer up Rick by suggesting — no, insisting — “We’ll find a way to go forward.” The preacher even seemed to believe what he was saying. And, by the end of the extended episode, an unlikely duo had given us reason to hope. Who was it? Read on…

‘LITTLE PIG, LITTLE PIG, LET ME IN!’ | As “Service” began, Michonne stole out of bed with Rick, retrieved a shotgun hidden in the fireplace of their home and snuck off (not without her lover noticing) to practice her long-distance shooting. Unfortunately, she was a whole lot better with her sword than with the gun — she fired and fired at an approaching walker, and the only thing she actually hit was a deer that she (or at least I) hadn’t even seen behind it.

Meanwhile, Negan, Dwight and the Saviors showed up at Alexandria’s gates ready to take what they (felt they) were owed. “Uh, who are you?” asked Spencer, risking his neck to be a smartass. When Rick pointed out that the Saviors were early, Negan cracked, “I missed ya,” then bashed a walker with Lucille as a demonstration of the “service” he and his army provided. Rick tried to talk to Daryl but, predictably, was forbidden. “He’s the help,” Negan noted. 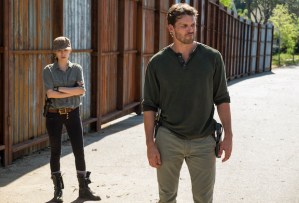 ‘I WOULD NOT HAVE MESSED WITH THAT GUY’ | While Negan forced Rick to show him around Alexandria and its “embarrassment of riches,” Dwight tasked Rosita and Spencer with going out to retrieve Daryl’s bike. As if to make sure we weren’t softening toward the scarred Savior at all after “The Cell,” he also took their guns, poured out all their water and even snatched Rosita’s cap off her head, the bastard.

In no time, Rick learned that Negan didn’t want the half of Alexandria’s supplies that had been set aside for the Saviors. He wanted… well, whatever the hell he wanted, including most of the mattresses in the community. When one of his flunkies brought him a camcorder with a bearded Rick’s initial interview with Deanna on it, Negan marveled at how dangerous his opponent looked. Too bad “that’s not you anymore, is it?”

‘DID YOU JUST THREATEN ME?’ | Next, Negan wondered aloud about Maggie — or, as he referred to her, “the sick girl.” Guessing that she’d been married to “No. 2,” the scumbag said, “Widows, especially ones that look like that, are special… They are just empty inside but usually not for long.” Before he could get any grosser, Gabriel appeared out of nowhere, asking if Negan would like to pay his respects, and helping Rick sell the lie that Maggie hadn’t pulled through.

Later, a shot rang out — oh, Carl. Upset that Davey and the Saviors were taking not half but all of Alexandria’s medicine, the teen had thought with what Negan marveled were “giant, man-sized balls” and pulled a gun. Alas, “half,” Negan explained, “is what I say it is,” so Carl had to back down… or else. Worse, his outburst had reminded the villain that Alexandria had an “assload of guns.” Naturally, “they’re all mine now.” 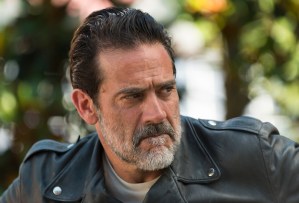 ‘THIS IS OUR LIFE NOW’ | At the armory/pantry, Negan, upon meeting Olivia, cracked that “I can’t be the only one to notice that you got a fat lady in charge of keeping track of rations, can I?” Since Alexandria had so little food, anyway, the Saviors wouldn’t bother to take any. So “how about a thank you?” Negan said. Little by little, Rick was glaring harder at his nemesis and beginning to use a tone of voice that he probably shouldn’t have.

In the woods, Spencer easily located Daryl’s bike, right where it had been left near the train tracks, and complained nonstop that “this is where we are,” thanks to Rick. “We just gotta learn to live with it.” Rather than listen to him whine, Rosita headed into the woods and stabbed some walkers, eventually dispatching one that had a gun — unloaded, unfortunately. Still, she was using her head, having predicted that the Saviors would take all their firearms. “This is not our life,” she argued. Or, if she could do anything about it, it wouldn’t be.

‘I HAVE FAITH IN US’ | Back in Alexandria, Savior Arat informed Negan that they were short two guns on Olivia’s tally. As you’d expect, he wasn’t pleased. “I don’t enjoy killing women,” he told her. But if those firearms weren’t found, she’d have taken her last inventory. Immediately, Rick held a town meeting, at which he pleaded for the guns to be turned in and made it painfully clear that “I’m not in charge anymore, Negan is.” When Eugene noted that not everyone was present, Rick deduced that volatile Spencer was the holdout. 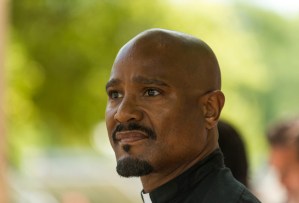 Sure enough, while Gabriel was giving his “I feel like I know this is going to work out” pep talk, Rick located the hidden weapons — as well as some rations and booze. (Spencer, you jackass!) When he ran outside to deliver the guns to Negan, Davey was creepily messing with Enid over her green balloons — a bittersweet remembrance of Glenn. Finally, the Saviors were about to head out when Michonne returned. Miraculously granted a moment to speak with her, Rick ran to her side… with Lucille! Negan “had me hold it,” he groaned.

‘I’M NOT LOSING ANYONE ELSE!’ | Though Michonne protested mightily about turning over the shotgun that hadn’t been part of Olivia’s logbook in the first place, Rick insisted, delighting Negan. “This is reading a room and getting the message,” he said, adding, “You, sir, are special.” Since Rick had proven they could follow the rules, he asked if Daryl could stay. “Maybe Daryl can sway me,” Negan suggested. But given the chance, Daryl didn’t utter a word.

Upon Rosita and Spencer’s return with the motorcycle, Dwight told Daryl, “You can have it back — just say the word.” (And, after last week, we all know what word — name — that is.) After retrieving Lucille and describing in I’m-pretty-sure-unprintable detail what it was that Rick was saying thank you for, Negan at last departed. But Rick’s awful day still wasn’t over. Next, he got into it with Spencer over his stash, and Deanna’s son made a crack about how “lucky” Glenn and Abraham were that was so nasty, Rick threatened to break his jaw if he repeated it.

‘THIS IS HOW WE LIVE NOW’ | Having overheard the confrontation with Rick, Rosita gave Spencer an earful herself and argued that “this doesn’t have to be our life.” Her plan to change it? As the plus-sized episode drew to a close, she showed up on Eugene’s doorstep with a shell casing. “Make me a bullet,” she said. Meanwhile, at Casa Grimes, Rick was making up the floor (since the mattress was gone) and trying to shut down Michonne’s argument that, “Everything we have, we got from fighting.”

When she suggested that they team up against Negan with The Hilltop — foreshadowing? — he noted that the Saviors still had the numbers. Finally, he told his girlfriend about Shane… and how he knows Judith isn’t his, biologically, yet she’s still his daughter, and “I’ll die before she does.” So could Michonne please accept their new way of life? “I’m gonna try,” she said. It wouldn’t be easy, though. The next day, she followed smoke plumes to discover the mattresses that the Saviors had taken, burned and discarded.

So, what did you think of “Service”? Who do you think is gonna snap and get themselves killed first — Michonne, Carl, Spencer, Rosita? Hit the comments.