Think your life sucks? Take it from Daryl — it could suck a whole lot worse. In Sunday’s episode of The Walking Dead, Negan’s “guest,” still grief-stricken after accidentally getting Glenn killed, was stripped naked, tossed in solitary and fed a steady diet of dog-food sandwiches and irksome pop music. (The same perky song, over and over again!) Was the torture so great that he finally broke and pledged his allegiance to the Saviors’ leader? Read on and find out. 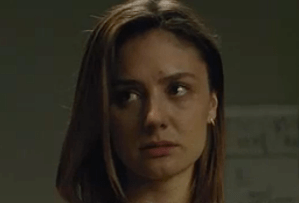 NO ‘SANCTUARY’ | As “The Cell” began, we got a look at Dwight’s life at the Saviors’ Sanctuary, and aside from the dissenters in the walker pen and the occasional flareup of violence, it didn’t look half bad. There was booze, Who’s the Boss? reruns and even time to whittle chess pieces. But then, Negan passed by, as if to remind us that this was hell, and his minions reflexively bowed their heads and dropped to one knee. So, uh, yeah, this was hell. Upon escorting Daryl to the infirmary for his checkup with Dr. Carson, Dwight learned from wife Sherry that her pregnancy test had come back negative. “Maybe next time,” he said optimistically. Before she left, though she knew better than to talk to the prisoner, she warned Daryl, “Whatever they say, just do it.” Carson sorta seconded that emotion, telling the patient, “Negan will take care of you. Trust me.”

BEND OR BREAK | Throughout, as odious we know Dwight is, he often seemed like he was genuinely trying to help Daryl by encouraging the captive to make it easy on himself and join Team Negan. Daryl, of course, insisted, “I ain’t ever gonna kneel,” to which Dwight responded, “I said that, too.” Later, as Daryl tried to break out of his cell, Negan delighted in the fact that his prisoner was “going apes–t” and, in congratulating Dwight on a job well done, jokingly offered him a nudge-nudge-wink-wink “blast from the past with you know who.” (Which wouldn’t really make sense until later.) When Dwight declined the chance to have sex with “whoever you want as long as she says yes,” Negan wondered if he was as “cool” as he swore he was. Luckily for Dwight, before the moment could get any tenser, an orange situation (grab-‘n’-go) erupted, and he was allowed to take off after the perp, Gordon. 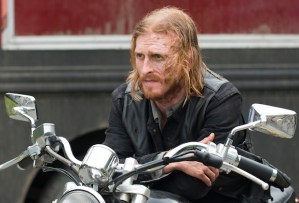 ROADKILL | The next day, when Dwight tracked down Gordon on the road, the runaway reminded him that they used to be friendly and asked why he couldn’t just let him go. How could Dwight be loyal to Negan, anyway, after all the villain had done to him and his wife? Sherry’s “not my wife,” Dwight said. “Not anymore,” Gordon acknowledged (that “blast from the past” comment becoming clearer by the second). There has to be another option besides cowering before Negan, Gordon argued. “There’s one of him and all of us… why are we living like this?” Alas, Dwight was so hopeless — and so desperate to please his master — that he wouldn’t even grant Gordon’s request to be put down for good. To get his quarry moving again, he threatened to dig up the poor guy’s dead wife and feed her to the crows. “You won,” Gordon finally said. “But you know there’s nothing left” back there. As he started down the road once more, Dwight aimed and fired. (So maybe he does have a soul after all?)

‘GO BACK WHILE YOU CAN’ | Back at the Saviors’ compound, Daryl had no sooner escaped from his cell than Sherry was beseeching him to turn back. “Whatever [Negan’s] done to you, there’s more,” she whispered. “There’s always more.” Daryl being Daryl, he ignored her warning and, in a matter of seconds, found himself surrounded by Saviors. Once Negan was done recycling old material — “Are we pissin’ our pants yet?” — he asked some of his men who they were, and, well-trained, they replied, “Negan.” “See that?” he said. “I am everywhere.” But, by escaping, Daryl had blown his chance to prove that he understood that fact. Now he had three options: 1) Daryl could work for Negan as a dead man in the pen. 2) He could “work for points” but wish he was dead. Or 3) he could work for Negan outright and “live like a king.” The choice seemed obvious to the psycho, but Daryl still didn’t relent and say, “OK, fine, count me in!” For a second, it looked like Negan was going to strike him out as he had Glenn and Abraham. But thankfully, Lucille wasn’t thirsty — whew! — so all Daryl got was a whupping by Negan’s henchmen. Later, Sherry hovered outside Daryl’s cell and reminded him that, when she’d said way back when that she was sorry for stealing from him, he’d answered, “You’re gonna be.” Well, she concluded, “I am.”

‘YOU’RE LUCKY’ | After a tense, enigmatic conversation between Dwight and Sherry, during which he asked her, “He good to you?” (“Yeah”), the scarred Savior tried a new tactic with Daryl, leaving him a Polaroid reminder of the friend he’d gotten killed. Finally, whether Daryl totally broke, he did at least break down in tears. The next day, thinking the captive’s conversion was complete, Dwight took him to Negan’s posh quarters. There, the madman explained that Dwight, his “superhot wife and her superhot sister” used to work for points. But, since Tina needed medication, which was hard to scavenge, the trio fell behind. Negan’s solution? The self-proclaimed “stand-up guy” would add her to his healthcare policy by marrying her. Instead of say yes on the spot, she fled with Dwight and Sherry. When the couple returned, tails between their legs, Sherry offered to marry Negan herself if he’d spare Dwight’s life. (Now all those mysterious conversations made total, horrible sense!) Though Negan took her up on her offer, he still “ironed” Dwight’s face.

‘DUMBASS CHOICE’ | What was the point of Negan’s story? After all that, Dwight still got on board with the program, he told Daryl, “and we are totally cool” now. Daryl could do the same. “All you gotta do is answer one simple question,” Negan said. “Who are you?” Finally, after an endless pause during which Negan wondered whether the recruit was simply “overwhelmed by the awesomeness of this,” our hero replied, “Daryl.” As Dwight returned him to his cell, Daryl said that he understood now why he’d stolen from him — Dwight had been thinking of someone else. “That’s why I can’t” submit to Negan, Daryl added. As the hour drew to a close, Dwight spotted Gordon, zombified in the pen, and we were left with the uncomfortable sensation of feeling sorry for him (and even worse for Sherry).

So, what did you think of “The Cell”? Were you surprised Daryl didn’t cave? Do you feel differently about Dwight now? And how many nuts besides me tried to find out what that damn song was to go and download it? Hit the comments.