If United States federal government agencies are run using the type of decision-making process featured in this week’s Quantico, we’ve got far bigger problems on our hands than who amasses the most electoral college votes on Tuesday.*

For reasons I do not understand, the CIA recruits are given the task/responsibility of figuring out whether or not to order a drone strike on a terrorist. Like, an actual drone strike, with death and everything. And sure, Owen surprises them by having the final say in the end… but wait: Why is a guy who’s been in the classroom and out of the field for 15 years calling the shots here, anyway?

So many questions — and that’s only in the past timeline, which coincides with the year anniversary of Simon’s death. What takes place in the present is a doozy, too. So let’s review the highlights of “Aquiline.”

*No, actually, we don’t have many problems bigger than who wins this year’s presidential election, so let’s all vote, OK?

BAD INTEL | In the past, Harry still desperately wants to know what Alex and Ryan are up to at the CIA. So they ask Shelby and Nimah for a cover story… and are told to come up with one themselves. Um, OK? Thanks for the help! But the handlers do suggest that the story play on some personal and/or painful part of Harry’s past, which will help him believe it. So Ryan tells the MI-6 operative that they’re investigating the suicide of a recruit — Sebastian inadvertently tipped Ry off earlier, saying that the Brit has had “real pain” in his life because his boyfriend killed himself — but Harry knows it’s a ruse. Even better, he admits that the story he told Sebastian was fake… and he’s unaware that Chen is right around the corner, eavesdropping.

By the way, this all takes place during a drill in which the recruits have to decide whether or not to order a drone strike on a terrorist. It’s merely an academic conversation at first… until Lydia and Owen put everyone on a transport and take them to Langley, where the actual strike will be ordered BY THEM. I realize it’s a lesson in what you’d really do in a situation rather than what you say you’d do, but good GOD. All the exercise at The Farm showed us is that they can walk around authoritatively, holding binders! 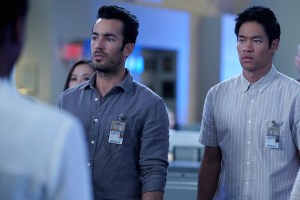 Anyway, Alex says no to the strike from the beginning; ultimately, Ryan and Harry stand with her, and because the decision has to be unanimous, the recruits say no. Then Owen says yes, and the bombing happens. Later, he reassures the group that the terrorist they took out was truly a bad man — but then reminds them that they won’t always have the moral high ground to comfort them.

Later, in their room, Harry tells Sebastian that he was really lying to Ryan, and that the story about the suicide was true. But his roommate coldly says he doesn’t care.

R.I.P., SIMON | All of this takes place on the one-year anniversary of Simon’s death, which, in the Jewish faith, means its time for the unveiling of his gravestone. Shelby, Nimah, Ryan and Alex all pay the grave a visit after dark (there was an official ceremony during the day) and place their rocks on top of the stone while Nimah recites the mourner’s kaddish. (Bonus points, Nimah, for knowing the whole thing off the top of your head!)

Also relevant, moving forward: Shelby and León are boning, and Nimah knows and she thinks that Shelby should go undercover as she goes undercovers with the photojournalist.

And Lydia refuses to help her dad with his takedown of those responsible for yanking him out of the field. She says it’s because he’s out of touch and a bad agent, but it’s also a little bit about how she wants him to be happy just to be around and be her dad.

THE ROOM WHERE IT HAPPENED | In the present, the terrorists throw the remaining hostages into a room, where they all discuss why they may be of interest to the Citizens’ Liberation Front. There’s a lot of yelling and disagreement, but they eventually realize that most of them were in Indonesia at some point in the past year. Leigh is forcibly removed when she mentions that she had a flight stopover in Surabaya; when she’s tossed back into the room, her collar is activated and she dies a bloody, terrible death. Then Dayana pulls Raina close and confesses that she, too, was in Surabaya and doesn’t want to die… just as the two of them are marched out of the room and separated. But once Raina catches her breath, she tells her masked captor, “You were right. Dayana may be one of them.” And as she removes her headscarf, the camera pans to show the actual Raina tied to a chair in the next room: The twin in the room for at least part of the time was Nimah!

Meanwhile, Lydia tells Alex that the terrorists are in possession of some computer drives holding sensitive information; the member states taking part in the summit brought them in good faith to the conference. Eric Boyer was brought in to decrypt them, but we all know how that went.

NOT SO SAFE | So the pair heads for the safe holding the drives, which can be opened by a code on the satellite phone Alex took from one of the terrorists. It seems all along like Lydia is telling the truth — she even needs Alex to help her once her collar activates — but it turns out that she was faking (she activated her own collar, which Alex learns just before her former instructor knocks her out).

When Alex comes to, chained up, Lydia says she’s CIA and she needs to secure, not destroy, the drives. “I’m so glad I didn’t become who you are,” Parrish spits, vowing to kill the woman the next time she sees her. “You won’t see me again,” Lydia promises, pulling an alarm on her way out and virtually ensuring that the CLF will find Alex ASAP.