Got an egg timer you like to use to track Alex and Ryan’s periods of happiness on Quantico? Yeah, it’s time to flip it.

While the CIA’s Least Under the Radar Couple doesn’t break up or anything as dramatic as that in this week’s episode, Ryan does mention that his love for Alex is his weakness, which is Stoic TV Guyspeak for “Whether or not I want to be, I’m one foot out the love door already — for your own goooooood.”

Meanwhile, in the present timeline, Shelby gets some troubling news from an even more troubling source, and the Citizens’ Liberation Front lets a bunch of hostages go — so why isn’t everyone happy?

Read on for the highlights of “Kubark.”

RELAX, RELATE, RELEASE! | At the episode’s outset, Miranda directs Alex and Ryan to lay low for the week, given that it appears that someone staged the suicide of a CIA operative in Berlin — and she suspects that the rogue faction in the agency was somehow connected. But Matthew Keyes doesn’t agree (and this will prove important later).

One by one, each of the future agents receives news that is troubling: Dayana’s in trouble with her job, Harry has some vague medical results, a dangerous drug baddie might be coming for León, yadda yadda. At the same time, Ryan gets an envelope containing a key left to him from Liam O’Connor. It opens a safe deposit box, and thinking about what might be in that box troubles Ryan for pretty much the entire hour. But we’ll get back to that.

When Owen passes out biofeedback monitors and tells the recruits they’re going to mingle with current agents in order to see how stressed they get — the objective is not to get stressed at all — Alex realizes that she and Ryan can run a counter-op by cloning Owen’s phone (which holds all the recordings of the monitors) and having Ryan needle the other recruits with pressing questions, all the better to see which topics make their heart rates spike.

So they do, and it appears that soccer mom from Hell Lee is probably the one who planted the bug we learned about in the last episode. And it turns out that none of the stressful situations the recruits encountered were real; Owen was just trying to see how they’d react under pressure. Speaking of which, Ryan bails on the counter-op and runs to open Liam’s safe deposit box… which contains a CIA baseball cap and a note from Lydia. The whole thing was a ruse designed to stress him. And it does. “If we’re gonna succeed at this thing, they can’t see how connected I am to you,” Ryan sadly tells Alex, who (almost too easily, right?) replies, “I get it.” 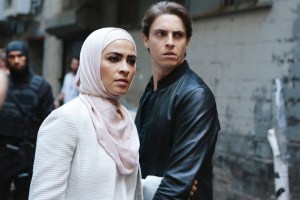 SERIOUSLY, WHAT IS MIRANDA’S DEAL? | In the present, Alex is able to make brief contact with Raina. The CLF wants to get rid of a bunch of hostages, and they want to trade them for the hacker the terrorists wanted pardoned in the season premiere. So Alex suggests that Raina somehow pass on the code “boiler room” to Miranda, harkening back to Liam’s fake bomb last season. “A fake threat luring us into real danger,” the translator says, adding that she’ll try.

Back at the FBI, Miranda wants to make the trade. Shelby does not. But when Paul agrees with his lady, it’s on. Miranda and Shelby find the hacker, Eric Boyer, and arrest him. When Miranda gets him alone, she makes it clear that she’s part of something shady: “You didn’t live up to your end of the bargain,” she says unhappily. We’re not privy to everything that’s said, but he agrees to the trade, then tips off Shelby to check her work email from 2012.

PASS ON THE PASSWORD | When the trade happens, Raina gets close enough to her old teacher to mention “boiler room,” but if Miranda knows what Raina’s talking about, she doesn’t let on. And when Alex opens fire from a window above, she alerts everyone to her presence.

Once he’s in the CLF’s clutches, Boyer says, “It wasn’t supposed to go this far,” grabs one of the blad-clad baddies’ guns and shoots himself in the head. Meanwhile, the CLF storms the building Alex is in. So Parrish pulls down her mask, shoulders her weapon and says, “OK, let’s do this.”

At the FBI, Miranda and Paul celebrate a win, but the blonde is unconvinced. She delves into her old inbox and finds a message Boyer planted. Subject line: Miranda. Body of email: “She’s one of them.”