If Quantico‘s León Velez ever gets a tattoo to commemorate his time in CIA training — y’know, to complement the ink he received during his stint in a Mexican prison — may we humbly suggest “Always be assessing”?

At the very least, the tattoo would be a reminder of the lesson Owen and Lydia spend this week’s episode trying to teach the CIA trainees: how to notice, or assess, all of the important details in any situation. Too bad Alex & Co. spend the hour ignoring what they’ve learned in favor of deep woods heart-to-hearts and safehouse strife.

Meanwhile, in the present, Alex infiltrates the terrorists… with mixed results.

Read on for the highlights of “Stescalade.”

COSTUME CHANGE | In the present, the Citizens’ Liberation Front moves the hostages to a new building. Alex gets in, too, and tells Miranda that she’ll do her best to provide some intelligence on how many people, weapons, etc. there are. Miranda receives a text (“We will find her”) from her contact inside the building, which is comforting if you believe that Miranda is still a good guy and terrifying if you think Miranda is now a baddie.

Alex comes across a crate full of CLF uniforms, each one complete with a suicide pill, so she puts on one of the get-ups and attempts to blend in. It all goes well until Ryan decides to recruit Harry, whom we learn is not CIA, to help him create a distraction by faking a fistfight in the middle of the room. Ryan’s plan is to get close enough to a terrorist to pull of his or her mask. But problems arise when the terrorist who happens to be closest to him during the melee is Alex. 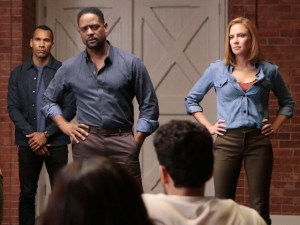 “Ryan!” she cries as he paws at her faceplate. They are pulled apart, with Ryan maybe thinking that his ex is part of the violent conspiracy. But when Alex is unmasked and marched into a tunnel or back stairway or somewhere equally remote and enclosed, she gets the upper hand and winds up in a fight to the death with the CLF member guarding her. Alex rips the terrorist’s mask off and (I am 98 percent sure) it’s the female instructor at The Farm. (Picture at right.) The woman winds up swallowing the suicide pill, and she dies a foamy-mouthed death.

Later, the hostages and CLF alike are surprised by a body of someone in a CLF uniform dropping through the glass ceiling. When the dead person hits the ground, we see that there’s a note attached: “2 Down.” This is either a warning or the most dramatic crossword-puzzle clue ever.

SHELBY TO THE RESCUE! | Back at the FBI, Shelby lets Miranda in on a secret: Even after the end of the program investigating the rogue CIA faction — or “AIC,” as Alex and Ryan have taken to calling it — Agent Wyatt wrote an unassigned white paper, “an in-depth analysis of everyone who could be in the AIC,” she proudly announces. Kudos to Aunjanue Ellis here, because I truly cannot tell if Miranda is slightly relieved that one of her star pupils is still doing extra credit homework or if she’s slightly freaked that information she thought had been buried/forgotten is now so easily accessible. Either way, she calls it “exactly the kind of advantage we need.”

Miranda asks Shelby to turn it over; a flash drive containing the report fries Miranda’s computer and eventually the same virus takes out Shelby’s personal laptop, too. But don’t worry! Shelby chirps: She had a hard copy in a safe at home, and she’s made copies and distributed them! Whee!

READ YOUR SURROUNDINGS | In the flashback portion of the episode, Miranda, Shelby and Nimah are impatient with Ryan and Alex. It’s been a week, and the lovebirds know barely anything about their fellow trainees. Speaking of which, there’s a new recruit in the mix: Lee Davis, an aggressively Type-A wedding planner and mother of two who appeared out of nowhere a few days before.

The FBI gives Alex and Ryan a bug to place in one person’s room. There’s some talk about how they can only plant one listening device because of feedback or something, but don’t think too hard about it, because it doesn’t really matter until the end of the episode, anyway. So the FBI goal of the day is to figure out which trainee should get bugged.

The CIA goal of the day, however, is to learn how to be “constantly aware of your surroundings,” Lydia say. After a bunch of drills — at which Dayana, in particular, excels — the recruits are told they’ll practice their skills at an office building 10 miles away. But while they’re waiting for transportation, the trainees are grabbed, made to don hoods and thrown into a van that drops them, in pairs, in the middle of the woods.

QUIT BUGGING ME | Alex uses her time with partner León to ask him about spending six months in a Mexican cartel prison. He says that he did so in order to tell the story of the atrocities that happen inside; he’s near tears as he remembers, and Alex is clearly affected when he says, “I don’t talk about it, because I barely survived.” Elsewhere in the forest, Harry asks Ryan about the whereabouts of Will from last season; Ryan, irritated, says he has no idea. And Lee and Harry team up after he realizes she disregarded orders and snuck her cell phone into the challenge with her.

But Owen isn’t handing out any gold stars when everyone gets back to The Farm hours later. It would have taken them 20 minutes, he says, if they had only paid attention to details like how many turns the van took, the sound of the tires against the terrain, etc. And the stress continues when Alex and Ryan meet with their handlers at the safehouse: They can’t agree on whom to bug.

BEAT YA! | Eventually, thanks to some Miranda-directed “personal” pushing on Nimah and Shelby’s parts, a plan is made to bug León’s room. (And Ryan assures Alex “We’re still us” after their disagreement.) But when the FBI turns on the device, there’s a ton of feedback: Someone else has already bugged the place.

Meanwhile, Lydia learns that Owen put in a tacit request to have her moved out of the field and into a teaching position at The Farm. The revelation brings her no joy. “You know what they say about you?” she spits at her father. “That it was a blessing you got benched, that someone probably leaked your name on purpose to make sure you never screwed up again!” And after she storms away, Lydia makes a call and tells the person on the other end, “I’m in. Tell me what I do next.”

Oh, and Harry? He totally buys a drink for Will at a bar and introduces himself as “Julian.”