The final frame of this week’s Quantico is enough to make you wanna scream, “Not again!”

Because in that final frame, which comes after a relatively quiet hour (well, at least quiet by this show’s standards), someone we know and esteem — and, more importantly, have always believed to be one of the white hats — appears to sell out Alex moments after Agent Shiny Hair calls in the first real intel on those creepy terrorists.

Knowing Quantico, my shocked suspicion will be negated in the first five minutes of next week’s episode. But for now, I could use a good yoga class to calm my anxiety and restore my inner poise. I hear the practice is good for ogling half-naked trainees as they twist themselves into otherworldly poses… I mean, restoring calm. Yes, restoring calm.

Read on for the highlights of “Lipstick.”

IF THE SAFEHOUSE IS ROCKIN’… | This week, let’s handle the past first — because not much happens, except that Alex proves herself the Worst Spy of All Time, with Ryan and a few of her classmates tying for second. At the beginning of the hour, Ryan and Alex are having some naked funtimes at the safehouse when they get word that Miranda will be there in 10 minutes. When Ryan starts waxing all romantic about how they should use those 10 minutes to their fullest potential, I start wondering about Ryan’s idea of how long aforementioned naked funtimes should last.

When Miranda arrives, she announces that Alex and Ryan are getting separate handlers, and that they have to look out for themselves — not each other. “You may be on the same mission, but you are not on the same team,” she says before taking off. 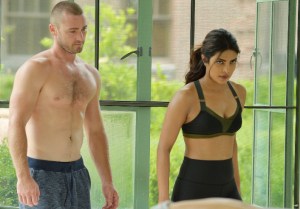 NAMASTE ON YOUR TOES | So how do Parrish and Booth begin their clandestine, “We are in no way a couple” subterfuge? By showing up late (!) and together (!!) the next morning when the class gathers for a yoga session led by Owen. Guys, I’m gonna need to you at least try. But they are very pretty and everyone is nearly naked, so I’ll allow it.

Important to know: Dayana is chilly toward Alex, her roomie — and she totally knows that Alex didn’t sleep in their room the night before. Lydia has a rather impressive crow pose. Owen is watching Ryan. And not a single one of the trainees (hel-LO, Léon!) would be out of place at a Lululemon catalog casting call.

The lesson of the week is surveillance and how to avoid it. When Alex goes into town, she realizes she’s being watched by members of her class, including Ryan (who takes from the Alex Season 1 School of Disguise and merely pulls up his hood and dons sunglasses). She manages to evade most of them, but as she’s celebrating her victory with Harry, he reveals that he was the “trigger” who was tasked with keeping her in his sights all day… something that I think most of us probably called the minute he asked her for a ride into town?

MAKE NEW FRIENDS, BUT KEEP THE OLD | Luckily for Alex, Dayana messed up worse by repeatedly taking “work” calls on her cell while she was supposed to be watching Alex. So the human rights lawyer winds up at the bottom of the murder board, and Alex gets a rare bravo from Lydia. (Don’t trust it, Parrish. In fact, why are you trusting anyone?)

Along those lines, Shelby is assigned as Alex’s new handler, and Alex allows herself a brief breakdown in her pal’s arms as she laments how much the new assignment is messing with her and Ryan’s relationship. P.S. Ryan’s handler is Nimah.

RAINA’S BAD IDEA | In the present, the Citizens’ Liberation Front puts wire collars on all the hostages and threatens to tighten them remotely if anyone does anything hinky. But when Ryan and Raina realize that the terrorists are cycling out hostages and then returning them, possibly with undercover terrorists mixed into the ranks, Raina scratches one of the terrorists on the wrist so she can identify that person as a baddie if he/she changes clothes and removes the mask.

Too bad the terrorists are smarter than she is; they put a small scratch on everyone‘s wrist, making her plan moot. “Why haven’t they killed me? They should have killed me,” she says, agitated as the CLF tosses her back into the mass of hostages. Ryan’s face says it all: Damned if I know!

MIRANDA’S BOLD MOVE | Meanwhile, a wounded security guard helps Alex gain access to a communications bunker in tunnels under one of the occupied buildings. (He loses his life in the process, so… thanks man!) She gets a call through to the FBI, where Miranda asks her to gather as much intel as possible and report back.

Then, Miranda sends a text via a satellite phone (or something like it), and the message goes directly to one of the terrorists: “Alex Parrish is inside.” Et tu, Miranda? Are you just Liam O’Connor in a kickass suit and with the deputy chief of the national security council (his name is Paul, we learn) as a boyfriend?